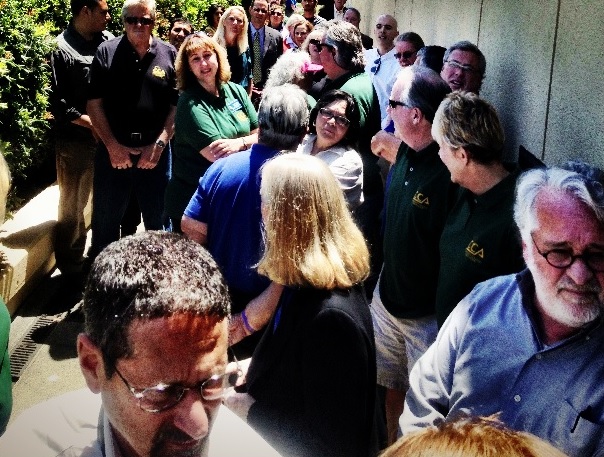 The Accrediting Commission of Community and Junior Colleges has the power to close City College of San Francisco, and students and faculty in line at the San Francisco Airport Marriott June 7 were there to hear about the fate of their school.

But at the only public meeting available to meet with City College’s accreditors in more than seven months, some 30 people were barred from entry.

The doors were were shut, police said, because there were only about 20 seats available.

Even the San Francisco Chronicle’s higher education reporter, Nanette Asimov, was left outside, haggling with officers to get into the meeting — and she called ahead to reserve a seat.

Lalo Gonzalez, a City College student who was recently elected to the Associated Students Senate, was dismayed at not being able to meet with the accreditation agency. “I would’ve assumed they would have reached out to students,” he said.

The commission made its decision June 6 on whether City College would keep its accreditation — without which the school would lose state funding and close. But that decision won’t be revealed until early July.
The accreditors put the school sanction for a number of reasons, mostly fiscal but also relating to measuring student achievement. The college has 85,000 students and nearly 2,600 faculty.

The meeting was held at the same Marriott used many times in the past for meetings, the commissioners said. But unlike normal meetings, on June 7 there were four police officers, two from Burlingame PD and two from City College, who patrolled more than 60 feet of metal barriers erected around the corner.

Part of that may have been reaction to the 30 demonstrators from the Save CCSF coalition (www.saveccsf.org) that protested outside the accreditor’s closed meeting Wednesday.

“I was shocked that we couldn’t get in,” student Sharon Shatterly said.

No bags, recording devices, or cameras were allowed in the meeting. As a private entity, the accreditation commission does not fall under California open access laws like the Brown Act.
Inside, 24 commissioners from the agency were seated, dealing with the day-to-day business of managing matters of California’s 112 community colleges, seemingly unconcerned about the dozens who waited outside wishing to speak. In fact, only two public speakers were allowed to address the accreditors.

One was Teeka James, a San Mateo community college teacher speaking on behalf of the California Federation of Teachers and the American Federation of Teachers. She read aloud a litany of complaints about the accreditors, alleging that the teams sent to evaluate community colleges didn’t have enough faculty members, that the policies of the accreditors weren’t values “widely accepted” by educators or other accrediting bodies, and that there was a lack of transparency in how they operate.

She especially bemoaned the agency’s conflict of interest —  the commission president is Barbara Beno, and her husband served on the team that visited and evaluated City College a year ago, which resulted in the severe sanction the school is under today.

The president and the reviewing agents are supposed to be independent entities.

“To serve the students and people of California properly, ACCJC has to change or be delisted by the Department of Education,” James said. “The time is now.”

She was basically summarizing an official complaint about the accreditation agency sent to the Department of Education last month. It’s 280 pages long, and the allegations are serious.

After her presentation, the members of the commission started to grill her.

“What qualifications do you have? What is the source of your evidence?” said Steven Kinsella, who was named in the official complaint as someone whose ties to business constituted a conflict of interest to his role as a commissioner on the ACCJC. He is a “public member” of the agency.

The questions kept coming – and some were about James herself.

James also argued that the accreditors needed to be more transparent about their process, which was exemplified by the dozens of people who weren’t let into the meeting. Beno disagreed.

“We’re a private institution,” she said. “You can imagine a college president comes in and they discuss matters that could be embarrassing or challenging. That can’t occur in public.”

Outside, the students who had come to talk to the commission that may potentially close their school sat beside each other in the sun, watching the blue of the bay from the hotel’s patio.

And what would Gonzalez and his fellow students have said to the panel if they had gotten in?

“I would’ve asked about if they knew how this was affecting my people, people of color. I would’ve asked about EOPS,” he said, which is the second chance program at City College for those coming out of prison. “They’ve cut over 30 counselors, they’re dismantling the school in the name of accreditation.”

Gonzalez and all of San Francisco will have to wait until the beginning of July to find out what will happen to City College.