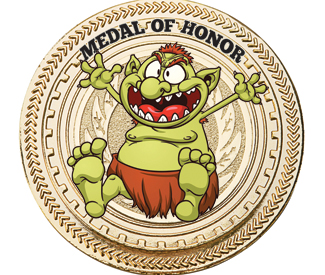 Week three is in the books for JAW at the SFBG. Almost a month here and while I’d like to say this is a fresh and brand new situation, Internet-speaking, it really isn’t.

Like a fair amount of the world’s presently upright population, I have a Facebook page, a couple of them, really. As I have been a peripatetic person in lots of different circles, I’ve made lots of friends and acquaintances. A truly diverse group. Which means agreement is rare, issue to issue. I have no problem with that. What I do have a problem with and what I insist upon (on my personal networking service) is one easy to follow rule: If you wouldn’t say it in person, don’t say it here. Not exactly a difficult demand, right?

It doesn’t take a tremendous amount of self-awareness to follow probably should be the “Internet Golden Rule”, but it does take a little self-discipline. Which seems to be a lot more that some people are willing to employ. More accurately, I think that the “internet troll” doesn’t want to abide by that rule because it removes their greatest thrill, which is being an asshole without any tangible consequences.

When I see the responses that the blogs get here–mine and everyone else’s–I cannot for the life of me imagine anyone saying some of the empty-headed and smugly belligerent remarks made here in real life. Simply would never happen. Not because of the fear of actual physical retribution or a verbal smackdown, but because however badly the internet troll was raised, even they know that putting a face to asinine commentary looks bad and is not likely to be as easily forgotten. Anonymous behind a monitor, it is safe to indulge in the worst kind of puerile posturing, because nothing can happen to you–hence “Internet Bravery”. It is the natural counterpart to “Internet braggadocio”, where life’s losers morph into Zuckerberg Jr by tapping on a bunch of keys.

The cloddish putdowns, the refusal to provide any verifiable evidence to wildly offbeat exigesis that are thrown out like playing cards at a bridge tourney–none of this would ever pass muster in a coffee house or bar or bus-stop or any other place living, breathing humans congregate. But on the Net, cozy in the online cocoon, the swaggering would be Patton’s bust out the bullshit with bluster and bravado.

So, this medal (lovingly crafted by Brooke Robertson) is for you. Defying carpal tunnel and hangnail, tapping away valiantly as you defend whatever or whomever is 100 rungs above you on the social ladder, print this baby out and pin it on with pride. Just not anywhere that anyone here might actually see you–of course.