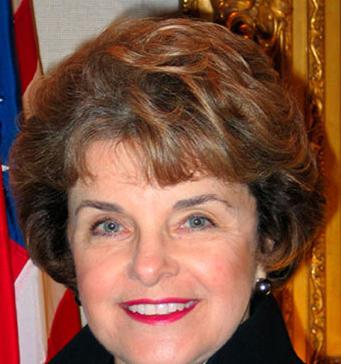 You have to have your head deeper in the sand than the worst Republicans not to have noticed that the federal government has been busted spying on all of us. Pretty much every cell phone call you make, and just about everything you do with social media or email, is being monitored be the National Security Agency to make sure you’re not a terrorist. It’s a pretty alarming violation of the Fourth Amendment, and President Obama’s main response is: Well, it’s secret but we told Congress.

The person who would have been the first to know, and the most fully briefed, is Senator Dianne Feinstein, who chairs the Intelligence Committee. That body exists to serve as something of a civilian check on the law-enforcement operations that are the NSA, the CIA, the FBI, HSA, and whatever other acronymed spook agencies are involved. From the committee’s own website:

Feinstein’s a former mayor of San Francisco. She represents the state where most of the companies that are allowing the feds to monitor their servers (Google, Facebook, Yahoo etc.) live. It’s her job to keep this stuff in line. And yet: She’s defending the snooping, as if there’s nothing wrong here at all.

I realize that people should understand that email isn’t private, what you put on Facebook might as well be on a billboard on 101 and you have to watch what you tweet. Many lessons have been learned in that regard. And all of us are so excited about our smart phones that we run around the world with mini-GPS locators in our pockets.

But most people still think they can make phone calls without being monitored. And while my trolls love to say “if you’re not doing anything wrong, you have nothing to worry about,” we all know that’s untrue. People are arrested and imprisoned fairly often in this country on suspicion of crimes they didn’t commit; when it comes to terrorism, the situation is even worse. And besides: Do you really trust the government to know everyone you’ve ever called, and from where, and when?  I don’t think Obama’s a bad person or has any evil intent — but still. Imagine if it were Cheney.

I’m unhappy with the president, of course, but I think I’m most pissed at my senator. Because presidents always push the limits of their power, and Congress is supposed to be a check on that, and Feinstein is supposed to be perhaps the most important check on potentially the worse expansion of power. And she failed.