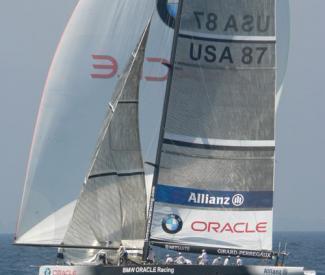 Imagine if the third-richest American — the guy who made the race so expensive that only billionaires (and poor Team New Zealand) could enter — became the man who lost the Cup. Imagine if the next race were held Down Under, with cheaper boats that don’t kill people — and no taxpayer subsidy from San Francisco.

Seriously: Ellison is an asshole, he’s refused to pay for his own race party, possibly sticking San Francisco with as much as $20 million in unpaid bills. Yeah, he’s the American in the America’s Cup, but I really don’t care if the trophy stays in this country.

New Zealand’s having trouble coming up the money for all the last-minute equipment changes, but I don’t see that team dropping out. The folks from NZ want this, and they want it bad. New Zealanders probably care more about the Cup than Americans do. Beating Ellison, with his unlimited cash and unlimited arrogance, would be a huge source of national pride.

So I’ll be out there watching the races, but I won’t be cheering the home team. And I’ll go home happy if Larry’s a loser.