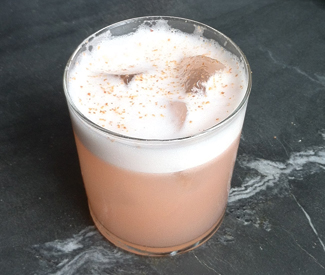 COCKTAILS Having worked in retail for the past five years, I’ve had Memorial Day off precisely zero times in the past half-decade. That means never enjoying the pleasure of spending the unofficial start of Summer barbecuing in the park, leisurely sipping ice cold beers with friends as the sun gets higher and the shorts get shorter. So when I got the email from the CEO of my new gig telling us all to go out and enjoy the holiday, I was delighted. That is until, in pure San Francisco fashion, the fog rolled in and all my visions of patios, grills, and parks misted over. What to do? My friend. Danielle and I didn’t take too long to figure it out: um, bar crawl.

We started at the Blarney Stone (5625 Geary, SF. (415) 386-9914) in the Outer Richmond. Along with some guys aching to watch a baseball game, I found myself waiting promptly at 2pm for the doors to open. Yes, that’s dedication. After taking my seat, Nathan behind the bar mixed me me a Paloma with freshly squeezed grapefruit juice, and I pulled out my book, waiting for my habitually late partner to arrive.

I’m a Blarney regular (I live a couple blocks away) and over the past four years of frequent Stoning, I’ve gotten to know the bartenders, who have gladly introduced me to some new spirits. And friendly fellow patrons have creatively helped me dodge uncomfortable encounters with any creepy visitors, all while enjoying said spirits. Can’t complain with that.

After several Palomas (at $7 each) and an Irish coffee (which was paid for by a gentleman who was probably a might too caffeinated by Irish coffees himself) — and after Danielle finally showed up — we hit the road and headed for Trick Dog (3010 20th St., SF. www.trickdogbar.com) in the Mission. I’ve been longing to hit up the Dog for some time now. If you’re a cocktail enthusiast, you already know why. Owned by Josh Harris and Scott Baird, otherwise known as swashbuckling bar-consulting duo the Bon Vivants, it’s been the hot spot ever since it opened this January.

Although all the seats were taken, we were lucky enough to be able to grab a standing spot by the window immediately after walking in. Danielle shifted through the cocktail menu made to look like a paint color swatch, while I ordered the mezcal-based Polar Bear ($11). Along with the mezcal, the Polar Bear is made with dry vermouth and Creme de Menthe. It’s a bit like a Glacier mint served up in a stemmed cocktail glass: minty and clear, instantly refreshing and smoky at the same time. I loved it. Danielle ordered the Straw Hat ($11), a Calvados (French apple brandy) drink with chestnut honey, hard cider, vermouth, rosemary, and lime served on the rocks, and I could tell in an instant she was into it. I moved on to a Baby Turtle: reposado tequila, Compari, cinnamon, grapefruit, and egg white (a weakness of mine in cocktails). It was frothy, pink, and lovely.

Blackbird (2124 Market, SF. www.blackbirdbar.com) at Church and Market, has been one of my favorite bars for a while now. Here’s hoping it remains popular but doesn’t get too crowded once the new tenants of all the condos being constructed on Market move in.

I love that the artwork inside changes as much as the drink menu (although I’m longing for the day the amazing Grape Drink returns). But nothing can beat the happy hour special. $5 sours? Yes, please.

Already floating a heavy buzz, we strolled in and easily sat at the bar. Whiskey sours would top off our night just right. Even better, more egg whites topped the yummy sours. I believe I had about three of these frothy treats before our Sidecar arrived to take us home.

After squeezing 10 drinks into six hours, I don’t remember much about the ride home (and I don’t dare look at my bank statement). But a Memorial Day filled with new drinks and new friends — cheers to that.