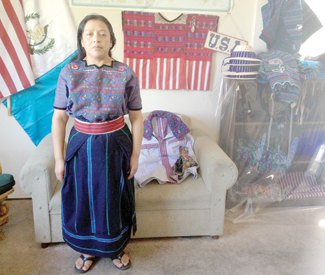 STREET SEEN Never in my time writing this style column has a clothing seller interrupted our interview to deal with an inquiry about legal advice or natural medicine.

But then, very few of the stores and designers I’ve featured have served as crucial a function in its community as the small enterprise run by Martina Lopez de Perez, who sells traditional huipils and fajas to her community of indigenous Guatemalan Maya Mam refugees out of her family’s home in Fruitvale.

Lopez de Perez’s husband, Felix Perez Mendoza, is the president of the thousands-strong East Bay community of indigenous Guatemalans, who were forced to flee the highlands of their historically conflict-wracked country during the dirty war that peaked in violence during the 1980s and officially came to a close in 1996.

Their small living room in a Fruitvale duplex is set up for business: a desk with neatly-stacked reams of paperwork, well-worn couch seating, a map of the United States, and smiling family photographs hung on the walls. A long glass case holds the traditional garb Maya Mam wear to religious events — or in everyday life as Lopez de Perez does, she tells me, when it’s not as ridiculously hot as it is on the afternoon I visit.

“I feel great wearing these clothes — it’s my traje,” Lopez de Perez tells me in fluent Spanish (though many Maya Mam speak only their indigenous language, she received formal schooling in Todos Santos, the town from which she and her husband hail).

She shows me the components of a traje típica(traditional outfit) — the round-brimmed sombrero with woven hat band, the square-cut huipil blouse, and corte, a solid floor-length wrap skirt, both made of a thick cotton and secured by an intricately embroidered faja, or belt around the waist. For men, she stocks striped button-downs, cut from a thick cloth and accented with patterned collars. The embroidery is magic, the colors vivid, but the pieces are a far cry from trend items.

Lopez de Perez imports the materials and finished hats from indigenous seamstresses in Todos Santos. “It’s a source of work, both here and there,” says Perez Mendoza, who encourages non-Maya Mam to contact them for a private shopping appointment if they’re interested in buying a summer blouse to support their indigenous community members. (Attention coffee nerds: Perez Mendoza is also looking for Bay Area roasters interested in purchasing the organic coffee beans grown by Maya Mam in their homeland.)

It’s with these traditional outfits that Lopez de Perez and her fellow Maya Mam represent a culture from which they have been separated from by tragic circumstance. Though Efrain Rios Montt, the dictator who murdered thousands of indigenous people throughout the country’s civil war, was sentenced to 80 years in prison last month, his head of military intelligence Otto Pérez Molina is the country’s current leader. My hosts’ daughters and son still live in Guatemala City, where they study at one of the capital’s universities.

In the past, Lopez de Perez says, Oakland’s Maya Mam were too afraid of being targeted by immigration police to wear the outfits proclaiming their heritage. Nowadays, thanks to the battles they and other immigrant groups have waged, they can wear their huipils wherever they like.

Which is not to say that she doesn’t need a little bit of convincing to be my Street Seen model on the unseasonably hot day we visit. But — with the added pleas of the friends who have stopped by the house that day — she eventually ties on her faja. She has to strut, I tell her. After all, she is Oakland’s Maya Mam Michelle Obama.