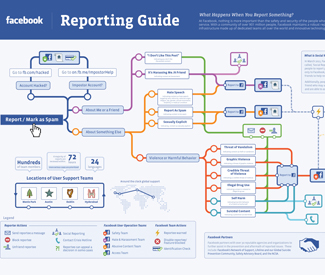 Facebook and other popular gathering places on the Internet are fast becoming the equivalent of a public commons, where many of our essential personal, professional, and governmental interactions take place, and a portal through which we access a large and growing variety of goods and services.

Yet I have no right to access or remain in this corporate-controlled space, from which I can be ejected at any moment for any reason, with no meaningful ability to appeal that decision, plead my case, or even learn about what prompted my corporate masters to cast me into exile.

That’s what I learned last week when Facebook mistakenly removed a page that I created two years ago to promote my book, The Tribes of Burning Man — ostensibly for “bullying” — and then temporarily suspended my personal posting privileges. My inquiries to find out what happened were ignored until I threatened to turn up the journalistic heat, and even then I couldn’t get any explanation beyond Facebook’s admission that “The removal was a mistake.”

Not that I expected any real substance or accountability. If there’s one thing I’ve learned from covering the technology industry over the last few years — from challenging the tax breaks designed to keep Twitter in town two years ago to my recent revelations that Airbnb is refusing to pay the Transient Occupancy Tax it owes the city — it’s that these companies address issues of public access, rights, and equity on their terms or not at all.

That’s even the case in the emerging realm of wiring cities with fiber to offer high-speed Internet access to all citizens, where Google is moving quickly to short-circuit municipal broadband efforts like the plan San Francisco is now considering. GoogleFiber is making Kansas City and other cash-strapped jurisdictions offers they can’t refuse, while simultaneously undermining the long-established principle of requiring telecommunications companies that use public rights-of-way to offer universal access.

I heard Wood speak in a May 24 conference call that The Media Consortium organized for journalists. He was joined by a Kansas City official and Institute for Local Self-Reliance member. Google refused to provide a representative.

Wood emphasized “the need for a public oversight role and commitment to universal access” by Google and other companies that contract with cities to lay fiber, similar to how phone companies were required to serve every household, and he told us that “no rules will apply if certain companies get their way.”

But even though the federal government created the Internet and still has clear legal authority to regulate telecommunications access and fairness — and even though Facebook’s billion-plus users give it unrivaled market share and power — Wood (a Harvard Law School graduate) doesn’t think private citizens have any rights in that realm or expectations of accountability.

In other words, in the virtual world it created — regardless of how extensively and aggressively it partners with other companies to make Facebook membership a prerequisite to accessing goods and services offered by hundreds of companies — Facebook is in charge, period.

I’ve read stories about Facebook users futility fighting decisions to ban posts that should enjoy free speech protections — from breastfeeding photos and diagrams of female reproductive systems to radical political speech — while allowing content that is racist or misogynist, and their difficulties in getting the company to explain its decisions.

But I began to experience the problem first-hand on May 28 when I was notified by Facebook that my page had been removed for violating it terms of service, specifically the ban on bullying, and that I could appeal by pressing the “appeal” button, which I did.

Immediately, I scanned The Tribes of Burning Man page, which had been largely dormant in recent months, and I could find nothing that might even remotely be considered bullying. The next morning, I was informed by Facebook that my appeal had been denied, my page was permanently removed, and my posting privileges were suspended for the day will I reviewed Facebook’s terms of services.

There was no way of knowing what the offending post might be or what prompted my ban, and I fruitlessly searched for a way to speak with someone by phone, eventually settling for sending electronic messages to Facebook as both a user and a journalist working on story.

No reply came, so I made plans with a videographer to go to Facebook’s Menlo Park headquarters the next morning to try first-hand to reach a human being. But I decided to delay my trek by a day when I woke up that morning to discover that not only had by posting privileges returned — but my “permanently banned” page was back.

Yet I still didn’t know why. Had I been sabotaged for critical coverage of the tech community? Did my blog post, Twitter tweets, and other journalistic pressure force a change in heart? Was it just a random glitch? Facebook wasn’t saying.

San Francisco’s tech-loving mayors have only emboldened these corporations’ most imperious tendencies. Then-Mayor Gavin Newsom was an early adopter of Twitter, using it to promote his official pronouncements, which I was able to follow until early 2009 when he blocked me for asking an impertinent question.

His successor, Ed Lee, has been an even biggest tech cheerleader and enabler, repealing the law that Newsom signed to subject corporate stock options to the city’s payroll tax and giving technology companies a pass on paying other taxes as well.

For months now, I’ve been trying to get answers from Airbnb officials about why the corporation is refusing to collect and pay the city’s 14 percent Transient Occupancy Tax on the room rentals that it administers, shirking an annual tax debt to the city of more than $1.8 million.

My media brethren have been slow to pick up on this important and fairly outrageous act of corporate stonewalling — which has been abetted by Mayor Lee, who shares a financial benefactor with the company: venture capitalist Ron Conway.

KQED’s Forum host Michael Krasny did ask Lee to respond to my stories and the company’s dodging of its tax debt during the May 28 program, and Lee replied, “They’re not so much dodging it, they’re making arguments, like any business would, about what applies to them and what doesn’t.”

Actually, that simply isn’t true. The company and its allies did make those arguments last year as part of public hearings and processes held by the Tax Collector’s Office to determine if the tax applies, and our elected Treasurer/Tax Collector Jose Cisneros determined that the company does, indeed, owe it.

Instead, the company just ignored its tax debt and hoped that nobody would notice. And when I noticed and started writing about the issue, the company refused to return my calls or make any reasonable public arguments for its behavior.

Large, wealthy corporations already enjoy huge advantages over the rest of us when they do decide to make arguments and engage in public discussions about the implications of their actions on the public commons. We need them for jobs and for access to vital public services, and they have the money and media access to make sustained arguments and implied threats that can prove very compelling.

But when they choose to refuse to have that discussion, and when they stonewall legitimate questions involving public interest, then they undermine the concept of democracy. And it’s just fucking irritating.

Facebook restored my service, but I still wanted to find out what happened and was having no luck. Finally, in the early afternoon, I sent another message to press@fb.com to reiterate my questions, and this time I let them know of my plan to show up on their corporate doorstep the next morning.

Within minutes, I finally got a response from Facebook’s Frederic Wolens: “Thanks for reaching out, and I apologize for the delay. We made a mistake removing content, and have restored it,” continuing for another paragraph of boilerplate corporatese.

I responded that I appreciate the response and apology, but that I was still trying to find out what happened and get answers to the questions that I sent him. I asked if we could please speak by phone and listed some of my unanswered questions, such as what triggered the removal, why my appeal was denied, and how my page suddenly came back.

He ignored my request to talk, and offered me links and answers that still didn’t address my questions, such as “we use a combination of automated and manual review systems and a mistake was made in the review of your Page causing it to be deleted, but it has now been restored. Unfortunately, we can not go into more detail.”

Finally, I just asked to talk to a live person, him or someone else, either by phone or I could come on down to Facebook HQ.

“Unfortunately, despite the size of our user base, we are a small company and won’t be able to provide a spokesperson at this time,” he responded.

“Apologies that we could not be of more help for the moment.”

A small company. With a market capitalization of $57.66 billion. Seems the folks that run it could afford to answer media questions — if they wanted to.