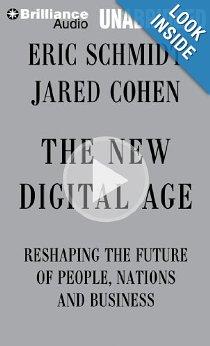 By now half the Internet has read the New York Times piece Julian Assange wrote on Google. In theory, it’s sort of an analysis of “The New Digital Age,” a book by Google Chairman Eric Schmidt and former State Department official Jared Cohen, which got a lukewarm review in the Times a month ago. In practice, it’s a total slam at Google and its “don’t be evil” slogan.

Assange isn’t impressed by the Googlers; in fact, he argues that the book is just a manifesto for a new digital age of American imperialism:

The book proselytizes the role of technology in reshaping the world’s people and nations into likenesses of the world’s dominant superpower, whether they want to be reshaped or not. The prose is terse, the argument confident and the wisdom — banal. But this isn’t a book designed to be read. It is a major declaration designed to foster alliances.

“The New Digital Age” is, beyond anything else, an attempt by Google to position itself as America’s geopolitical visionary — the one company that can answer the question “Where should America go?” It is not surprising that a respectable cast of the world’s most famous warmongers has been trotted out to give its stamp of approval to this enticement to Western soft power. The acknowledgments give pride of place to Henry Kissinger, who along with Tony Blair and the former C.I.A. director Michael Hayden provided advance praise for the book.

Google will interpose itself, and hence the United States government, between the communications of every human being not in China (naughty China). Commodities just become more marvelous; young, urban professionals sleep, work and shop with greater ease and comfort; democracy is insidiously subverted by technologies of surveillance, and control is enthusiastically rebranded as “participation”; and our present world order of systematized domination, intimidation and oppression continues, unmentioned, unafflicted or only faintly perturbed.

It’s easy to paint Assange as a crazyman seeing conspiracies everywhere (I’d get that way too if I were cooped up in an embassy and unable to escape.) And that’s how some of the tech journals are playing it.

But let’s get beyond Google Glass and information capture and the scary shit that technology will be doing to us all in a couple of decades. Let’s take Google out of this altogether.

Is it unusual for giant corporations based in the US that control important technology to work closely with the government? Of course not; it’s been going on for more than a century. Standard Oil, J.P. Morgan, General Motors, Lockheed Martin … the list goes on. Corporations that operate on that level are and always have been a part of American foreign policy — and almost always for the worse.

Google doesn’t build missles or spy satellites (although you know they’re working on drones), but what it does is even more powerful — it collects and controls information. And while much of its mission involves making the world’s knowledge available to all, there are other sides to that. And it would be shocking if the State Department/CIA/Industrial Complex DIDN’T involve Google.

At a certain level, if you’re running a big coporation, you have to do more than have a slogan to avoid being evil. Assange’s article is a bit over the top, but I think that’s what he’s trying to say. And it’s absolutely true.