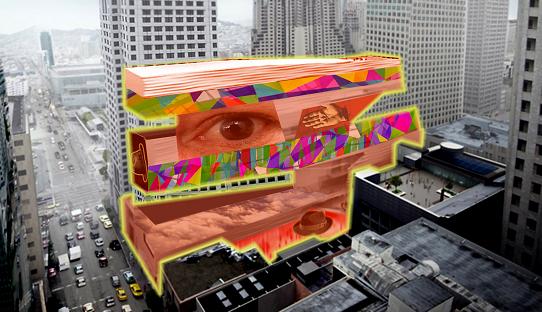 The students from SoMa’s Bessie Carmichael Elementary, against my better judgement, were to ones to push down the level detonating… whatever was going to mark the groundbreak of SFMOMA’s planned two-and-a-half years of closure for massive renovations expansions this morning.

When glitter cannons took the place of the further obliteration of the building behind Supervisor Jane Kim and the museum trustees with their hard hats and decorative shovels, I breathed a sigh of relief. I should have known any cultural institution with the foresight to build a DIY graffiti wall made of cookies wouldn’t allow minors to be injured.

Dry your eyes though kitty-cat, when the museum returns, it’ll be free to visitors under 18 and larger by 225,000 square feet at an estimated cost of $610 million. 41,000 square feet of free-access public space has been promised, in addition to a new seventh floor outdoor terrace and massive vertical gardens.

While we wait for 2016 to arrive, art fans are invited to enjoy special roaming installations, like the Mark di Suvero sculptures already gracing Crissy Field.

The Contemporary Jewish Museum, Yerba Buena Center for the Arts, and Asian Art Museum, and other venues will be hosting special SFMOMA collaborations.

Here’s what we have to look forward to with the new design, courtesy its creators, Norway’s Snøhetta architecture firm.

Today’s groundbreaking included aforementioned cookie wall, accompanied by some sadly impotent spray cans of edible spray paint. Groundbreakers were encouraged to spray, then walk off with a souvenir “brick” baker by Blue Bottle Coffee pastry chef Caitlin Freeman. I ate mine when it feel apart in my hands: a delicious impermanence, sonly slightly troubling in that the cookie wall was meant to mimick Snøhetta’s architectural style.

I’m sure it will be fine. Here are the little ones charged with ushering the SF arts scene into the future.

And Supervisor Kim, in a chain metal scarf-necklace that topped off the single best outfit I’ve seen a city politician sport.

Museum trustees and officials praised the city’s “universal support” towards getting the renovations funded, which was also supported by private donors, including $5 million from anonymous sources. An estimated 1,400 construction jobs wil be created by the project, say museum PR materials.

Swing through for one last look at the current facilities, and check out the future if you’re so inclined. Download this app by Brooklyn’s Will Pappenheimer and John Craig Freeman and pull out your phone at 10 points throughout the SFMOMA to view:

Artist-created motifs that riff on features of the museum—such as plants from the new vertical garden and fragments from the current building—merge with iconic images from the Bay Area’s natural and tech environments to create a circling vortex of animation through and around the building, as well as floating off into space.