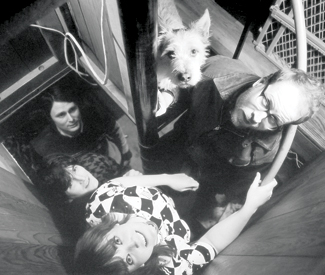 TOFU AND WHISKEY Bay Area garage pop quintet the Mantles will release Love Enough to Leave on Slumberland Records next month (June 18) and play the Rickshaw Stop a few short days before that (June 14). The breezy group formed in 2007, but sounds like it could just have easily been hanging out at Vesuvio in Jack Kerouac Alley or across the street at Specs Bar in 1968, grasping stiff drinks and talking politics and fashion with local drunks.

Although, singer-guitarist Michael Olivares, wife and drummer Virginia Weatherby, and their new dog Jumbo moved to Oakland’s Temescal neighborhood last year thanks to rising rents in Bernal Heights, where they formerly lived. So that old-time SF scenario isn’t quite as picturesque as conjured. But the band still bleeds Bay Area. Olivares and Weatherby frequent nearby 1-2-3-4 Go! Records for vinyl, and the Night Light, the Hemlock, the Knockout, and El Rio for live shows. The band recorded its new album with local legend Kelley Stoltz, and the other three band members — keyboardist Carly Putnam, bassist Matt Roberts and, newish lead guitarist Justin Loney — live scattered throughout SF, in the Tenderloin and the Mission.

Plus, it’s really more the sound that evokes those vintage tastes, those early Nuggets-esque psych-pop ideals. Olivares gets the comparisons and appeal, though hopes his band does not come off as just a carbon copies of the past (it doesn’t). “We definitely like all of that music and other things from that era, that culture,” he says. “We’re aware enough though that I hope to not become just a blatant revivalist band that’s trying to wear tie-dye shirts and bell-bottoms or something.”

But still, the favorable comparison is applicable, “Most of the music I listen to is from that era, the ’60s and ’70s, so I’d say we’re pretty heavily influenced by it.”

This may come as no surprise to listeners still besotted with the Mantles’ self-titled 2010 debut (Siltbreeze), with its nimbly Byrds-like appeal. Yes, three years later (and EP Pink on Mexican Summer in between) the mood remains upbeat, but like the musicians who created it, there’s an older wisdom to the approach.

There’s a seen-it-all-before strength from tracks off Love Enough to Leave such as “Brown Balloon” and only slightly more solemn album closer “Shadow of Your Step.” It’s like the group time-warped and took those free-wheeling early folk popsters back to the garage with them, plugged in and showed them proto-punk, then had a serious conversation about what would happen to the Bay Area in 2013: housing prices will rise again, there will be this thing called the web that changes everything.

When asked what’s changed since he first moved to SF a decade ago, Olivares says it seems like bands have gone poppier (including his own), but also notes there’s been a shift in the sheer number of house shows in SF proper.

He says their migration to the East Bay loosely influenced title track, “Long Enough to Leave,” and “Don’t Cross Town.”

Conversely, there are some more character-based tracks inspired by books and films like Mike Leigh’s comedic camping ode Nuts in May (1976), including jangly opener “Marbled Birds” and the illusory single “Hello,” which initially seems like a pleasant conversation. Cheery to begin with, it feels like candy and turquoise rotary telephones in teenage bedrooms (a ruse, the band members are all actually in their early 30s). But then, it gets to the line, “Hello/Maybe you can help me get out of here.” Ah, the hook, and out comes the reverb. Olivares told me it was actually about a time when his friend in France was sending postcards and he kept forgetting to respond.

While the Mantles may evoke vintage San Francisco, there’s something moving in this week that’s entirely new to the area and musical landscape. The America’s Cup Concert Series at the America’s Cup Pavilion (between Piers 27/29), stricken by neighborhood complaints, finally soldiers forward (but now down to 30 concerts from 40). It’ll be SF’s largest venue — holding up to 9,000 classic rock fans in an outdoor concert bulb connected to the equally maligned America’s Cup. Teamed up with Live Nation, the Pavilion will host a barrage of top 40 acts including Imagine Dragons this weekend, Fri/31, (already sold out).

Then there’ll be Sting, the Steve Miller Band, Counting Crows with the Wallflowers, 311, Train, Sammy Hagar, and it goes on. It’s a rather stale line-up, perhaps best suited for those legitimately excited for the boat races. The youngest group is the Jonas Brothers, after that Fall Out Boy and Panic! At the Disco (all well into their 30s). Perhaps the only really interesting additions are Weezer and the symphony. Here’s hoping the neighbors don’t keep complaining.

And now, a little spring-cleaning for Tofu and Whiskey. Some Bay Area bands are killing it in late May and June. Dreams in the Rat House (Hardly Art), the explosive new full-length from Oakland trio Shannon and the Clams dropped last week. As noted when the single “Rip Van Winkle” was released, the kings and queen of surfy doo-wop have kept up their hip-shaking guitar lines and voracious vocals with a joyfully trashy edge. There’s also now a mini doc on the band, OutofFocus TV’s “American Music Episode 6: featuring Shannon and the Clams,” which you can check on Youtube and Vimeo.

In it, Shannon Shaw, Cody Blanchard, and drummer Ian Amberson (who quit sometime during filming apparently) struggle to describe their band, which leads to a great video edit that includes snippets of each saying words such as “fantastical, ballads, cozy, weirdo, Muppet, punk, oldies.” shannonandtheclams.com. Song to check: “Rip Van Winkle”

The record seems to take listeners on a narrated life trip, through “College” and “Figured It Out” to the “Siren’s Song,” finally settling on the inevitable with twinkly “When Sunday Morning Comes” and unhurried “Everyone Want to Be You.” Rogue Waves plays the Independent July 13. roguewavemusic.com. Song to check: “No Magnatone”

And then there’s Oakland’s Mortar and Pestle. On its self-titled new full-length, the band projects a vibe akin to a trippier Little Dragon. There are bouncy keyboard lines and scattered found-sound touches boosted by the lush, dreamy vocals of lead singer Janaysa Lambert. On first single “U.V” there’s even the familiar ping-ping-ping of a classic pinball game, forcing you to picture the full Mortar and Pestle set-up placed neatly between games in a 1980s arcade. The synth-pop trio is also one of the first acts to see release on Metal Mother’s new label-collective, Post Primal, so you know it has her stamp of approval. www.mortarandpestlemusic.com Song to check: “Pristine Dream.”