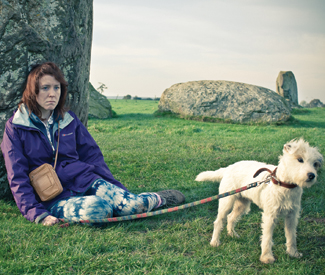 FILM From the wonderfully cracked mind of British director Ben Wheatley — whose 2011 Kill List infused the played-out hitman genre with gory verve and folkloric terrors — comes, at last, Sightseers. If you missed it earlier this year at SF IndieFest, here’s your chance to experience Wheatley’s latest mash-up, a black-comedy road movie that follows a pair of infatuated misfits as they visit some of England’s more prosaic tourist attractions. Long before they reach the Keswick Pencil Museum, however, it becomes clear that one of them is a serial killer.

But it doesn’t take frenzied bloodshed to indicate that something’s a little off with both Tina (Alice Lowe) and Chris (Steve Oram; both actors co-wrote with Amy Jump, Wheatley’s wife and frequent collaborator). Tina’s a sheltered, frumpy 34-year-old who still lives at home with her controlling mother (Eileen Davies); their relationship revolves around baby talk and emotional manipulation, as well as a shared sense of grief over losing their much-worshipped dog, Poppy, in a freak knitting-needle accident.

Bitter Mum blames Tina, a compulsive knitter, for Poppy’s demise. “Murderer!” she hisses, as Chris whisks a giddy Tina away (“Show me your world, Chris!”) with his beloved Abbey Oxford Caravan in tow, the upbeat-tempo-meets-cautionary-lyrics of “Tainted Love” blasting on the soundtrack. After these bits of foreshadowing, it’s not a complete surprise when Chris reacts oddly to a man who carelessly discards an ice-cream wrapper amid the sacred environs of Crich Tramway Village. The first death is perceived as accidental, by Tina, the police, the victim’s family — but we saw Chris peep the offender in his rearview mirror before mowing him down, and we also saw the delighted smile creep across his face in the chaotic aftermath.

As Tina and Chris’ holiday continues, their relationship settles into a comfortable groove: Chris calls the shots, while Tina — delighted to be dubbed the budding author’s “muse” — follows his lead, spending her downtime decking out the trailer with tacky tchotchkes. The litterbug’s death fades quickly, but it’s not long before things get weird again, when the couple encounters two smugsters who are more or less upgraded versions of themselves: more attractive, more tasteful, more successful, and possessed of both a nicer trailer and a dog who’s a dead ringer for Poppy. Once again, the molecules in the crisp English-countryside air rearrange themselves, and the façade of a peaceful vaycay crumbles. The tone shift is heralded by a slo-mo montage set to Vanilla Fudge’s “Season of the Witch,” a cover so acid-soaked it makes an already-spooky song even more appropriately nightmarish.

Thus zooms forth Sightseers, with two protagonists so snapped from reality that happy, goofy moments continue to shine through the darkness. Though Tina disapproves of Chris’ habits (or does she?), her main concern is making sure the trip continues apace — and that Chris continues to treat her like a muse, even if she’s serving as muse for a creative endeavor that hardly resembles writing a book. The film’s most literary moment comes when a booming voice-over, not heard before or after, chimes in to narrate a key moment with William Blake’s “Jerusalem” (cutting off right after the word “Satanic”).

Not immediately familiar with that poem? Well, the musical version of “Jerusalem” is so popular in Britain that it was incorporated into the opening ceremonies at the 2012 London Olympics. If there’s a downside to Sightseers, it’s that some of its Brit-specific quirks might be lost on American viewers. It’s funny enough even if you don’t have an ear for regional accents (or the ability to sort out the posh ones), an appreciation for Daily Mail jokes, or the slightest knowledge of caravan culture. But the humor in Sightseers, probably more than Kill List and definitely more than exec producer Edgar Wright’s Shaun of the Dead (2004), is aimed more at the hometown crowd.

Still, any Yank with a wicked streak will appreciate Sightseers‘ deliciously deviant, decidedly deadpan point of view, and its take on class wars is obvious enough to translate into haughty vs. tacky. If the pairing of Tina and Chris is a disaster waiting to happen, Lowe and Oram — both British TV stars who developed their characters over a period of years — create comedy gold, with some of the more luridly awkward sex scenes in recent memory. Though Oram got the funniest of Sightseers‘ four promotional posters (tag line: “Death has a ginger beard”) Lowe, in particular, makes the most of Tina’s little-girl-lost shtick, eager to please her man but most certainly not to be fucked with.