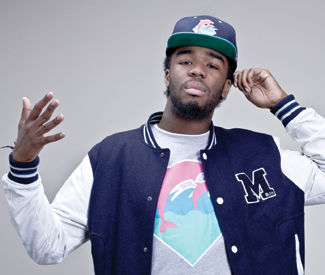 MUSIC Here, in the depths of the pot smoke-drenched green room of Slim’s, the muffled chants of an insatiable gathering of Bay Area hip-hop fiends grows louder and more forceful by the second. The crowd is brazen in its vocal yearning for the show’s main act of IamSu! and Compton rapper Problem.

This show, which took place at the end of last month, was a de facto homecoming spot on the Million Dollar Afro mixtape tour and the leader of the HBK (Heart Break Kids) Gang was keen to give his fans what they wanted, and then some.

After a quick team prayer, IamSu! and Problem make their way up the back stairs towards the stage, giving the ceremonial daps to the homies along the way. Then amid a torrent of blaring horn drops courtesy of HBK Gang DJ Azure, IamSu! and Problem leap out on stage like they’re t-shirts being launched from a cannon, the kind you’d traditionally see at baseball games.

IamSu!’s lumbering 6-foot-something frame is rocking a dashiki and a slim leather jacket. The duo commandeers the performance with the skills of a group of season veterans and dutifully maintains the hype level two clicks above organized calamity for the majority of the show. Between each track, someone or some group out there is getting a shout-out, but the biggest shout-out of them all is reserved for the completely unexpected appearance of Juvenile, who is trotted out to perform his verse on “100 Grand.”

If IamSu! had followed the conventional hip-hop career path, he would have quickly spat out an album following his 2011 potty-mouthed, Gold-certified single “Up” and filmed the all-too-common hip-hop club music video with Lil Wayne. But for all his youthful cheerfulness, IamSu!, or Su for short (his real name is Sudan Williams), embodies a dexterous patience when it comes to decisions regarding his budding career.

He has plans for an album but no specific date. He frankly would rather kick it in the studio with his HBK crew laying down tracks on tracks on tracks than strut it out on the national stage, at least for the time-being. Su cheerfully remarks that “with or without music, HBK Gang would be having fun together,” but, almost conversly, holds high aspirations for his crew: “I want it to be a brand like Nike and you see our logo and you already know it’s from the Bay Area. That bond is what keeps us so humble right now, the fact that people will check me when I’m being an asshole, I’ll check somebody else and vice versa.”

A handful of major labels have courted Su and he has rejected generous offers from at least one. In fact, he’s still residing at home because he admits he “just hasn’t had the time to find a new spot”, but he did confirm to me that his pockets “are on sumo.” It was there in his childhood room/makeshift studio that he recorded his incredibly slippery and jolting verse on E-40’s “Function,” while recovering from a cold.

Su, who raps and talks with an undeniable East Bay twang, is just as adept in the studio as he is on the mic and just like the Kanye-model, Su produces nearly every track he raps on. Like East Bay hip-hop stalwarts Trackademiks and Kool A.D., Su explored and absorbed the craft of beat-making at the Oakland nonprofit media center, Youth Radio. Starting at the age of 15, he spent three days a week immersing himself in knobs, keyboards, and drum pads. The first poignant moment of his time there — and of his rap career — occurred when he performed for his peers at Youth Radio, which was the result of a weeklong competition. Su fondly recalls it was “one of the best feelings ever” when he observed the positive reactions of the crowd at Youth Radio.

Su now does the bulk of his production at a small and almost claustrophobic studio tucked away in a nondescript office on the border of Emeryville and Berkeley. There in that studio, I caught a glimpse of the process of constructing a slap.

Starting with a simple synth riff and voice sample, Su gradually and artfully added layers of drum hits, hi-hats, and bass jabbed while twisting and warping the voice sample. Operating the keyboard drums with his left hand, Su maneuvered the mouse to dig in the sample database and drop in instrument clips, all while methodically bobbing his head like a metronome. It wouldn’t be an IamSu! joint if he wasn’t also testing out some indistinguishable lyrics under his breath. Around 15 minutes later, the result was a rough draft of what will likely be a banger, which had the overwhelming approval of his crew present in the studio. Though Su affirmed for me that this joint won’t be hitting speakers “for at least a while”.

While in the studio, Su couldn’t help but bug out with giddiness every time he listened to one of his unfinished tracks, he seemed playful yet focused, relaxed yet determined. That brimming combination of curiosity and enthusiasm remains the driving force behind his dozen or so mixtapes.

Overarching questions pertaining to the status of hyphy or Bay Area hip-hop don’t apply to Su. Whether or not he brings back hyphy or becomes the first rap superstar of the decade from the Bay Area, the self-described “laid back friendly kid who likes to make music, go shopping, and listen to ’80s music,” is going be having the time of his life in the studio, with the full support of his crew.