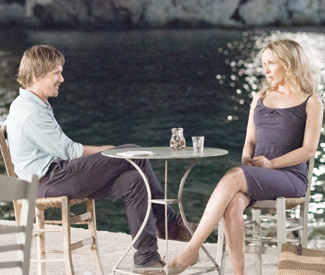 
FILM Half a lifetime ago — that is to say, sometime in the mid-’90s — on a train rolling through Austria, a young American man named Jesse (Ethan Hawke) met a young French woman named Celine (Julie Delpy). They were in their early 20s, and maybe that’s why it didn’t seem outlandish when, after some passing miles and some good conversation, he asked her to get off the train with him in Vienna, proposing that they spend the next 12 or so hours wandering the city, until his flight home in the morning. He didn’t scream axe murderer, and he made the case that if she stayed on the train, she might look back on her decision in 20 years, from the vantage of an unsatisfying marriage, and regret it. On paper, it sounds dubious bordering on smarmy. But sometimes it’s all in the delivery, and it didn’t seem too lunatic when Celine said yes.


So for the next hour and a half, we followed them as they traced a meandering itinerary among Vienna’s monuments, cafés, bars, and riverside walkways. Drifting through half a day’s worth of dense conversation (a sort of retort to the typical romantic comedy montage), they told personal anecdotes, took philosophical positions, and did a certain amount of playful flirting, whose intensity crept upward with the passing hours as the parameters of their encounter began to constrict. By morning, we were pretty invested in the last-minute arrangement they made just before Celine boarded her train: to reconvene there, barring personal constraints, in one year’s time. As the sun rose on all the places they’d passed through, empty now, we were left with that ambiguous possibility and our own guesses and projections as to whether Jesse and Celine would ever see each other again.


Since 1995, when director Richard Linklater, Delpy, and Hawke told this story in the film Before Sunrise, they’ve returned to these characters three times: they surface in a disconnected cameo in 2001’s animated Waking Life. The 2004 follow-up Before Sunset, shot in real time, reunites them after nine years in a Paris bookstore, where Jesse, now a successful writer, is reading from his novel about their time together in Vienna; more discursive talk and a beautifully ambiguous ending ensue. And now Before Midnight marks the third installment in a series whose occasional, compressed episodes submerge us so deeply in a particular moment of Jesse and Celine’s lives that we begin to forget how long it’s been since we saw them last.


When the newest film — co-written, like Before Sunset, by Linklater, Delpy, and Hawke; Linklater wrote the first film with Kim Krizan — picks up with Celine and Jesse, another nine years have passed. And it’s possible that they no longer recall with the warm clarity we do that gorgeous, affecting, flirty scene in the last few moments of Before Sunset, when we left them alone in Celine’s Paris apartment listening to Nina Simone, Jesse looking very likely to miss his plane back to the States this time around. It was one of the more perfect movie endings in recent memory, true. But in the intervening years, a lot has happened, including twins, a rancorous divorce and custody fights (for Jesse, whose teenage son lives in Chicago with his ex-wife), another best-selling (and semiautobiographical) novel, various environmental battles (for nonprofit worker Celine), and nine years of steady, unrestricted companionship that have inevitably overshadowed the telescoped intensity and romantic longing of the pair’s early encounters.


Now in their early 40s, Jesse and Celine have formed a web of commitments domestic and professional, and Before Midnight reflects this shift by adopting a more expansive outlook, the camera pulling back to take in a wider circle of family and friends. The film begins with a scene between Jesse and his son, Hank (Seamus Davey-Fitzpatrick), saying their farewells at an airport in Greece’s southern Peloponnese, where the family have been spending the summer at the home of an older expat and writer, Patrick (played by veteran cinematographer Walter Lassally).


When we finally see Celine, waiting curbside at the car with their little girls, she’s on the phone with a colleague in Paris, and her and Jesse’s exchanges as they drive signal a habitual intimacy (new to us but now commonplace to them) — as well as a few recurring sources of tension. Back at Patrick’s, the camera moves amid a crowded intergenerational scene and, at dinner, circles the table in an extended take as these disparate characters reflect on the stages of love and life in the kind of rambling, associative conversation we’ve come to expect of the series.


There’s a neatness to the generational roll call at the dinner table — a couple in their 20s (whose long-distance affair via Skype is juxtaposed to Before Sunrise‘s romantic, chancy gesture); two couples in their 40s; the elderly Patrick and a female friend, both widowed. But the discussion itself is messy like life, and things get messier still when Jesse and Celine finally manage some alone time. We see the people who met half a lifetime ago, but the shock of recognition comes when the fissures in their relationship are fully exposed, cracks we can follow back nearly 20 years, as well as forward. We remember, and so do they, Jesse convincing Celine to get off the train with that fast-forward glance at a possible future, and wonder if we’ll ever see the two of them again.