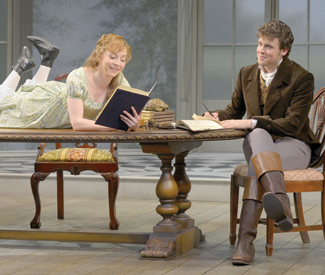 THEATER Tom Stoppard is not a playwright who shies away from topics of unusual size. While other writers might confine themselves more narrowly with plumbing the emotional depths of their protagonists, Stoppard further concerns himself with the very workings of the universe they live in, and the machinery of history and the evolution of thought that informs their relationship to it.

In Arcadia, Stoppard inserts his articulate, intellectually-curious characters into long-winded conversations about Euclidian geometry, determinism, and the second law of thermodynamics, while still giving plenty of stage time to more emotionally-fraught preoccupations such as “carnal knowledge,” public reputation, and even romantic love. Set in both the Romantic age and the modern era, the two storylines are rife with parallel plot points: the philosophical implications of chaos theory; the abrupt self-exile of that most tempestuous of poets, Lord Byron; the struggles of two brilliant female characters to be taken seriously in their respective times; and even a quiet affection for tortoises.

Set primarily in the gracious drawing room of an English estate (designed for this production by Douglas W. Schmidt), the play is nevertheless far from static, spanning, as it does, 200 years of Western thought and several generations of the wonky Coverly clan, who inhabit their Derbyshire home with the carefree insouciance of the very wealthy. However, with the exception of the formidable Lady Croom (Julia Coffey), the expected mannerisms of a stifled upper-class don’t really manifest themselves in either her gifted daughter Thomasina (Rebekah Brockman), or in the modern-day coterie of Coverly siblings, who wander through their stately mansion in hoodies and jeans, speaking frankly of mathematics and sex as if the two passions were one and the same. Indeed, by the end of the play, it’s hard to believe otherwise, testament to Stoppard’s ability to thoroughly contextualize both.

It’s the character of Thomasina, as luminously portrayed by Brockman, who first captures our attention. Armed with precocious directness, the 13-year-old quickly reveals herself to be both sharp-witted and intellectually hungry, tackling Fermat’s Last Theorem, the meaning of “carnal embrace,” and the scientific implications of a bowl of rice pudding with equal intensity. Although her advanced aptitude eventually commands the respect of her otherwise professionally-frustrated tutor, Septimus Hodge (a handsomely rakish Jack Cutmore-Scott), she is constantly and casually dismissed by every other adult in her life — from her forceful mother, to the foppish Captain Brice (Nick Gabriel), to her unpleasant, Eton-educated brother Augustus (Titus Tompkins). Truly a product of her time, even Thomasina’s name is telling — the name given to a girl child whom everyone would have preferred to have been a boy, then left to her own devices until she reaches the age of matrimony.

Shifting to the next scene and the present day, we encounter Hannah Jarvis (a pitch-perfect Gretchen Egolf), a brittle yet erudite academic whose own intelligence has recently come under attack thanks to her controversial book about Lord Byron’s erstwhile lover, Caroline Lamb. As she seeks clues to the identity of the mysterious “Hermit of Sidley Park,” her pragmatic Classicist outlook locks horns with the strident Romanticism of a fellow academic, Bernard Nightingale (a fabulously fatuous Andy Murray) who has come to Sidley Park in search of Lord Byron. The combative chemistry between the two professional and philosophical rivals is one of the production’s great pleasures, and although it’s hard to not delight in Nightingale’s eventual comeuppance, the occasional points he scores in the name of “gut instinct” can be equally cheered.

This is Perloff’s second go-round helming Arcadia, the first occurring in 1995 at the then-Stage Door Theatre (now Ruby Skye). Despite some lags in energy, her measured direction matches the elegance of both the decor and the lofty ideation without sacrificing the sly wit that simmers beneath almost every dialogue. Though the pragmatic, modern-day scientist Valentine (Adam O’Byrne) points out that thanks to the principles of thermodynamics, everything in the universe will eventually wind up “at room temperature,” the emotional heat trapped in the most coolly academic characters nonetheless gradually seeps to the surface. The play’s final scene, a wordless waltz between two unlikely pairs, trembles right at the verge of combustion.