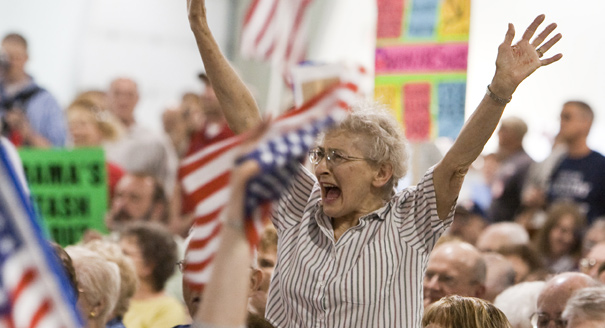 Yesterday, Business Insider, the bastion of leftist socialism, reported that the Republican Party’s negatives are polling at an all time high. 59% of the public disapproves of the GOP. That number has only been this high once before.

The piece and a companion on Yahoo attributes the dissatisfaction to over-reach on the IRS/Benghazi issues mostly. Also the phenomena of “gerrymandering as electoral poison”, where congress-people from safe districts reflect their constituents’ views and those constituents are way out of America’s mainstream. Logical reasons, all of them.

I disagree. How many people really follow these scandals that closely? 40% of the people that thought Benghazi was a major issue can’t even find it on a map and they care about it. Imagine the people that hear “Benghazi” and think of the actor with the similar name or the tiger with the similar name. Most people don’t care at all about these matters, so why would they dislike the GOP that much?

The reason is painfully obvious and is not a surprise. But no one wants to say it aloud. I will, though–while many Republicans are indeed wonderful people (and relatives), most of them in 2013 are just plain assholes.

They’re assholes. The kind of unpleasant, red-eyed, mouth-foaming obsessives whose every thought centers around partisan politics and how every news item can be determined as good or bad. Not “true” or “false”, mind you. And this monomaniacal focus means that dealing with them in person is a drag and on the Internet, a nightmare. Any buzz word, anything they heard in their hermetically-sealed-off-from-reality echo chamber is barfed back onto the rest of us in a technicolor spew of incomprehensible talking points. Conversations with them have to be carefully parsed so as not to set them off. That may be OK when dealing with a child with an emotional issue, but these are technically adults. Who wants to self-censor everything lest they get a torrent of twittery back?

It’s like the guy on the bus that hasn’t bathed in a month. No one wants to sit near him. And the guy on the bus may be a great guy. But at that moment, he stinks. That’s how Republicans have become on the issue of politics. Keep them away from the topic and they may be OK, but because so many of them live for the stimulating rush of “telling off the libs”, they’re basically, well, assholes.

The worst part of this is that their hapless and cowardly adversaries, the Democratic Party, now need do almost nothing to win elections. All a Democrat has to be is “not them” in a fair part of the country to be competitive. Smile a lot, seem reasonable and speak calmly even as you do awful shit (see “drones”) or nothing (see “Gitmo” or “non prosecution of Wall Street”). (See Obama, Barack).

This was not the case in my youth. Republicans were generally the thoughful, prudent careful ones and even if they were still Tory-like, they weren’t aggressive about it and saw the other person’s point of view. Today’s Republican politician and their enablers bellow out inane Heritage Foundation horseshit and with a patina of smug contempt for the uncoverted, not unlike the above it all hippies post-Altamont. Their leaders and pundits wonder what might win people over to them? Simple. Stop catering to and being assholes. After that, you’ll be fine.