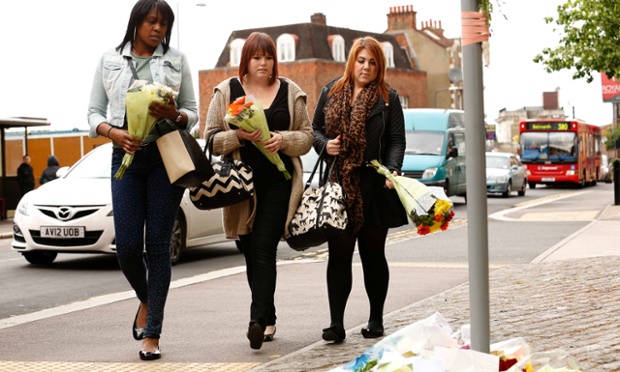 The gruesome and sordid attack in Woolwich, UK has alarmed and horrified that nation and a fair amount of the world. An unprovoked beheading by cleaver of the 25 year old Afghanistan war vet has stunned London and in the wake of the killing, reprisals have been carried out against Muslims in the UK as well. There have been heroes in this story as well, but it is impossible to imagine that anything would balance off this lunatic brutality.

When it became clear that the attackers were Muslims, you could almost hear the Pamela Geller’s and Steven Emerson’s of the world climaxing in sexual ecstasy over the intertubes. Their “opposition”, the people that trot out Tim McVeigh as the “white Christian terrorist” by way of “everyone does it” when these attacks occur were silent–they’d lost this one. Better luck next time, I suppose.

Which isn’t quite as sickening as the violence itself, but shit: What is wrong with these people? A dad had his head lopped off and for all the expressed sorrow by Islamophobes, they were actually pretty jazzed. Whether they admit it or not, what’s one dead dude you never met compared to the thrill of rubbing it in some “dumb lib’s” face? You were right and what’s better than that? Nothing!

It’s just as bad when it’s some white supremacist asshole and the “I told you so” palaver comes from the left.

Thing is, the idea that “my team won, yay!” over this story and other negates the painfully obvious. This is a complex issue. It doesn’t boil down to “see, I told you the Islamofascists were crazy/No, they aren’t”. Imperialism, propping up bogus sheikdoms, coups, invasions, nationalism–a melange of those plus the asymetricality of terrorism is complicated. Nobody wants to delve too deeply into the actual cause. They just wanna be the “right person at the water cooler this morning”. To which I say enough already. Really.