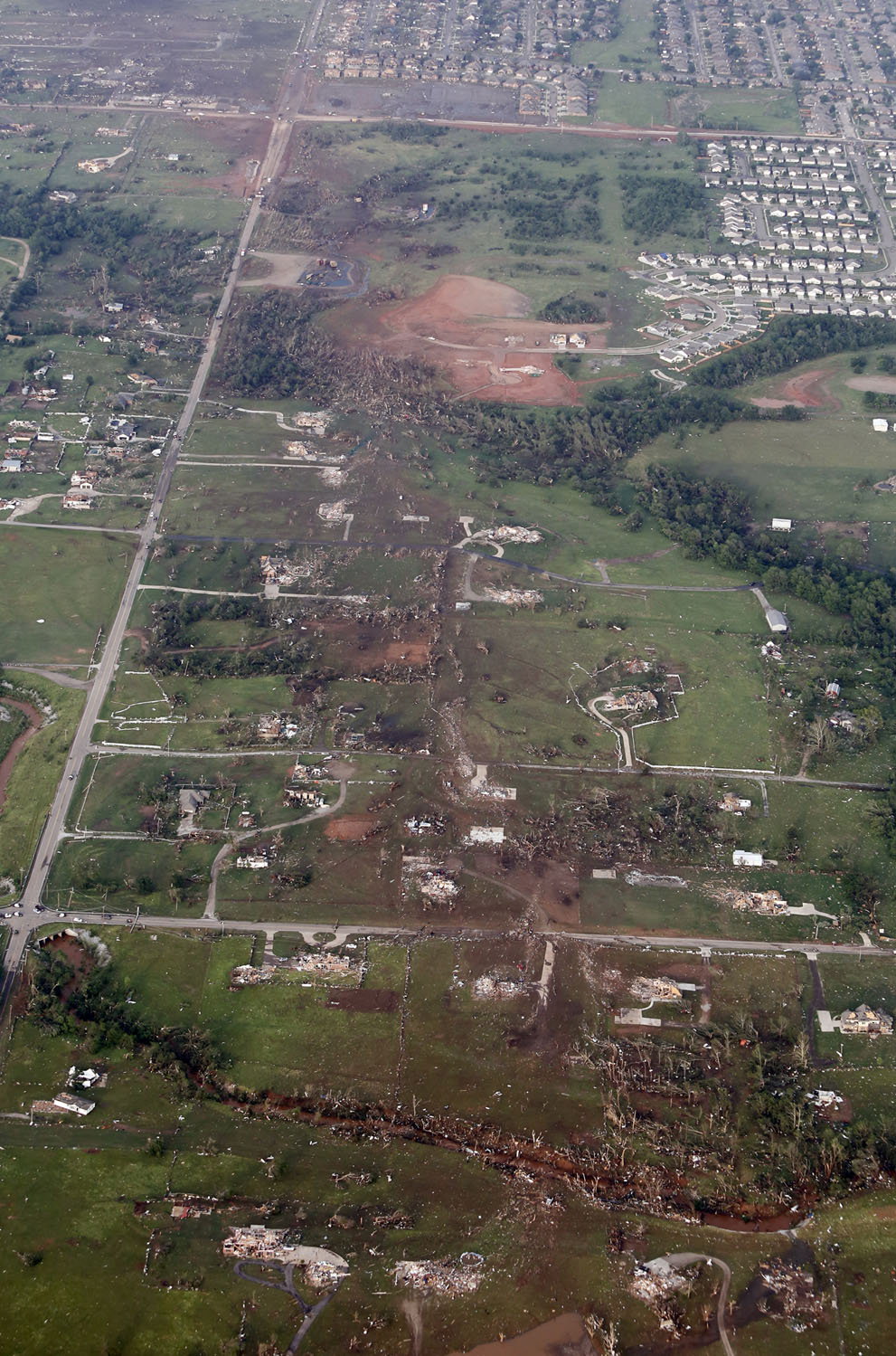 Every Monday, Wednesday and Friday morning, I take a brutal boot-camp type class at the Hollywood YMCA here in LA. 45 minutes of sheer hell, but as these things are measured, surely worth it. I’ve been going for the last year and a half at the prodding and urging of my friend Stacy “Beano” Johnson, a lively and lovely woman and an ex-pat Okie from outside Tulsa. Yesterday, I walked in to find her strecthing and she seemed, as you would imagine, distraught. Her state is devastated. Despite downward revisions of casualties, at least 24 people were killed by the storm and the cost to insurers will be over 1 billion dollars. Luckily, none of her family or friends were among the dead or wounded.

Because we are 1) good friends and 2) I am by nature very inquisitve, I asked her if her people back there were putting some of the cause on this particularly violent and early in the year twister on man-made climate change. Beano turned kind of reddish and responded “hell yeah they do. And why wouldn’t they? Summers are getting hot as hell there and it feels like it’s headed to 120 degrees when we go back for vacation. I know damned well it is”.

She isn’t a scientist and is also a self-proclaimed “California liberal” (by way of disclaimer). But this is nothing new to anyone with kin in “flyover country”–my younger brother has been telling me for ten years that the farmers in “Tornado Alley” where he is in Western Illinois talk about the heating and extremes and the effect on crops–and, as Beano has said, why wouldn’t they? 2010 was one of the hottest years on record, another freak tornado devastated Joplin MO in 2011, a drought nearly destroyed the entire Midwest’s crop output last year and now this. Yes–this is where tornadoes happen and they have been happening forever. But scientists warned us that “weather patterns are going to get more extreme and more violent” as the planet heats up and yes it has, and according to 97% of said scientists, the culprit is fossil fuels.

That no peer-reviewed publication has said otherwise and that the only “scientists” that claim that the jury is out tend to be on oil company payrolls isn’t exactly a new revelation. But in Oklahoma, were any politician to claim that the destruction in Moore was because of man-made climate change, they’d be demolished in the next election like so many of the homes were a few days ago.

And why? Because oil is one of the state’s biggest employers, in refining and extraction and logistics. Koch is king in the Sooner State. And even though the average Okie is beginning to see the light, they are willing to look the other way when their livelihood is concerned–their jobs are, in a way, literally to die for.

It is disgusting and sad and vile, but as Louisiana governor Bobby Jindal could tell you, there’s no percentage to ever attack the mighty hand of the petro-oligarchy. Despite the cheapskate idiocy by British Petroleum that nearly ruined that state’s fishing and tourism industries, at no point did Jindal demand that BP pay for all the damage they’d wreaked.

And so the oil companies continue their version of bullshit, as their exec’s declare that to destroy the planet is “God’s will” and their paid shills in broadcasting claim zero culpability, the planet roasts and the people of Moore are wondering where they’re gonna live. And if you think this is just far fetched lefty hand wringing, even the almighty insurance industry knows climate change is real and are changing their rates accordingly. These people play the “life and death odds” for a living in actuarial tables. They know.

Meanwhile, Oklahoma’s two Republican senators are asking for the same federal aid that they denied to Jersey and New York, “God’s will” is again invoked (by America’s #1 publicity hound family) and no one dares speak the truth, that black gold and natural gas are slowly cooking its users and that these same people will battle renewable and clean power with every trick in their arsenal even as it makes their grand-kids lives sheer misery. You might say that the denial is as high as an elephant’s eye in O-kla-Homa……