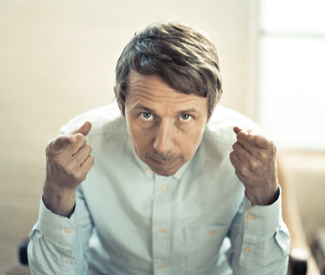 MUSIC “Tastemaker” is a word that gets thrown around enough to be meaningless. Anyone can share a track on Facebook or attempt social apotheosis via Twitter, most likely to find that Pitchfork reposts get drowned in the echo chamber and Do415 accounts are D.O.A. Not everyone can be Gilles Peterson, a DJ in every sense. Whether in a club, as a compiler of obscurities, or as a pirate radio turned BBC radio personality and interviewer, when Peterson plays a song, people actually listen.

“It’s been to my benefit, but I just find that many radio DJs are so conservative about programming.” Peterson combines a continental eclecticism picked up from French radio, the underground approach of ’80s UK pirate stations, and “a kind of British pop, feeling-part-of-a-movement way of playing records.” As a result, as a DJ on BBC’s Radio 1 for more than a decade and now on BBC Radio Six Music, he’s frequently been at the head of the movement, with a reputation for playing artists before they were “famous.”

“Whether it’s James Blake, or Amy Winehouse, or the Roots — such incredible music — people weren’t playing it because they weren’t being told it was good. For me it all landed on my plate, so I was like, yeah man, I’ll play that, this is real good.”

Still, Peterson is quick to recognize where something slipped through his filter, telling me “Burial is a good example of an artist I never played, until a long way down the line. It was a little bit too avant garde for a lot of people, and it was the media, the journalists who really broke that, and then a lot of DJs, myself included, reacted to being tipped off.”

With more conventional radio jocks — tasked with chasing trends and setting up artists owned by a subsidiary of their parent company — it could be too late by that point, on to the next flavor of the week. But Peterson selects tracks with an exceptional disregard for genre or era. Soul and acid jazz may be his standards, but a given playlist goes well beyond, drawing connections in natural but not obvious ways. A recent episode of the syndicated Gilles Peterson Worldwide, a tribute to late great soul jazz trumpeter Donald Byrd, included a slick remix of the easy to Google Glaswegian electro pop Chvrches, a rare Prince related cut, and a bit of Johnny Hammond, for starters.

The next big thing is great, but Gilles is as much on the lookout for rare grooves. “I still go around to people’s houses and do crazy swaps, or spend 200 pounds on a rare seven-inch. That’s probably my biggest vice, apart from smoking and drinking and everything else that I do.” Frequently re-releasing these finds on compilations on labels including his own Brownswood Recording, the effect can be huge for the original artist, as it did for an obscure Bay Area soul singer a few years back. “I bought Darondo’s ‘Didn’t I’ as a rare record and started playing it. It was kind of like an Al Green track, but not by Al Green,” Gilles recounted. “I had quite a good connection with Andrew Jervis who was working at Luv ‘N Haight/Ubiquity at the time. He picked up on the fact that I was playing it, and then he went out and obviously found out Darondo was living in San Francisco, and it was great to see he got rediscovered.” As a result, more material from Darondo was released, and seeing the singer at a show at the Rickshaw Stop in ’07, I couldn’t help but feel it wouldn’t have happened without Peterson’s influence.

A club DJ, Peterson has overseen wave after wave of dance music trends, counting himself among a certain class of pre-1988 DJs — the year of the acid house explosion in the UK. As he puts it, he was “one of those guys who was spinning in 1981 on pirate radio stations and playing six nights a week in 1985 at every club in London.” Today that seniority (and no shortage of opportunities to be heard on radio or online) comes with an ability to be more selective of the venues and appearances he makes outside Europe, generally sticking to New York and L.A. “It’s not just about turning up and playing randomly for money. I’ve been doing this for more than 30 years now so the pleasure for me is more the social interaction and the fun. I hate when it becomes a chore or its just kind of forced.”

Given the years since his last SF appearance, I was curious how he viewed recent trends, namely the monolithic rise of EDM in the US. “For the first time in America, after many many years seems, it’s made it properly nationwide, a mainstream part of music. Whereas before, dance music in whatever form was always very fringe, it was always very gay or very specialist.”

A self-described contradiction, with an ear for both the mainstream and the underground, Peterson is most “fascinated by seeing, especially at the moment, this new generation of British producers, predominately what you’d call the bass music scene, people like James Blake, Mount Kimbie, and Mala,” all artists he supported early on, when they were emerging beat makers. “To see them now becoming hugely important in not just underground music but contemporary music makes me very proud,” Gilles said. “The more high quality people working at the high end level, the more exciting that is. For every David Guetta you have a Hudson Mohawke. Basically, that’s dance music.”