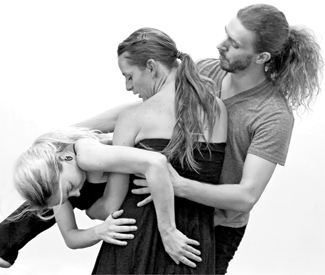 DANCE For all of the hype about the communicative power of social media, the energy that flows from one body to another has yet to be beat. Dancers know that. That’s why they keep searching for new ways to make this silent language speak.

The Garage on Folsom is one place where they do it; the studio is run on a first-come, first-served basis with a compulsory performance component, so a lot of what you will see there is unfinished. Yet the other night, two Finnish-born choreographers presented pieces as refined and polished as anything shown in bigger venues.

Another venue that fosters innovation is Yannis Adoniou’s Kunst-Stoff Arts, above a Burger King across from the San Francisco Main Library. It takes a more focused approach by inviting similarly-minded artists (who don’t care about the occasional whiff of fried food making its way upstairs). The recent opening of Kunst-Stoff Arts Fest 2013 showcased three choreographers who pushed the dancing body to the edge of what seems humanly possible.

But first, back to the Garage — where Raisa Punkki’s punkkiCo world premiere, Other Space, took command. Some lengths could be edited to keep the trajectory better on track. Also, the image of a dancer emerging from a kind of subterranean existence in the shape of a raincoat didn’t ring true. But overall, this quartet (for three women and one man) was finely crafted dance making that explored states of being with a rich, multi-faceted vocabulary and formal controls that allowed for flux and even spontaneity.

Other is designed along the concept of making connections that could be in unison pirouettes or jumbled limbs of labyrinthine complexity. Densely layered encounters gave way to stillness or something as simple as a walk or sitting quietly. The spatial thinking pulsated against the stage’s perimeter, enlarged in a couple of places by mirrors. For the most part the dancing was fierce and full out, yet still had room for small gestures: hands that turned into claws, fists that pushed the dancers into relevé and down again. The idea of balance — and lack thereof — lay below much of Other, sharply brought to life by Jennifer Meek, Sarah Keeney, Meegan Hertensteiner, and Derek Harris.

The Bay Area premiere of Alpo Aaltokoski’s 2004 astounding Deep showed a dancer who seemed to exist simultaneously inside and outside his body. Gaunt with a shaven head, he whipped himself into a tornado, engaged in turns that layered his body horizontally, and stretched his frame beyond his height only to squat again and again. Crawling, he looked pre-human; howling, he became Everyman. At one point, he was on all fours and sucked in his spine to turn his shoulder blades into wings. Yet none of these physical feats were self-serving; there were stories aplenty in them. Mila Moilnan’s subsequent video, based on Deep, felt like an afterthought.

First-week performances at the Kunst-Stoff Arts Fest included three works, two of them in progress, and clearly presented as such. What I saw made me want to follow them because both choreographers seemed to think intriguingly about time.

Christina Bonansea’s Floaters #2, set on identical twin dancers Michaela and Liane Burns with excellent live music by Zachary Watkins, started as an installation in the basement. At first resembling statues of saints, the silver-gowned women came to life, slithering and scraping. Upstairs, they ripped into waves of frenzy that threatened to tear them inside out.

For Portraiture, the forbiddingly prodigious Lindsey Renee Derry, as much a gymnast as a dancer, assembled a linear structure from thematically distinct solos that ranged from lyrical to ferocious. In the future, she wants to extend this trajectory by inviting other choreographers, perhaps to evoke something like Andy Goldsworthy’s Wood Line installation in the Presidio.

Adoniou and the gorgeous Constantine Baecher, a former Royal Danish Ballet dancer, paired up for The Excruciating Death of St. Sebastian. One is dark and older, the other blond and tall, so the tracing of their relationship started on a note of difference. Their give and take began intertwined, as if they were asleep, and grew into teasing and tenderness, shot through with exploration and exuberance. Finally, with the help of a cane, the piece moved into darker territory. My tolerance for watching pain — real or pretend, received or given — is just about zero. Still, this was fine work.