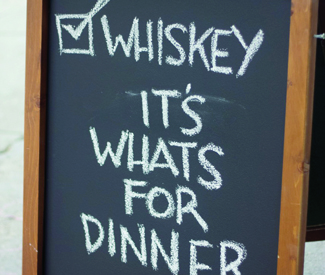 COCKTAILS In San Francisco, there’s a bar for practically every situation. Feeling high-class yet mysterious? Bourbon and Branch is right up your alley. Colorful and trendy? Go to Trick Dog. If you need to drown your sorrows in the dark, there are plenty of dive bars ready to pour you a heavy-handed drink.

But if you’re just looking for a well-made cocktail in friendly spot after work, let me introduce you to Southside Spirit House, the newest bar to hit SoMa.

Greeted by a chalkboard sign declaring “Whiskey. It’s what’s for dinner,” I walked into the then-week-old spot with no expectations. Despite working in the neighborhood, I don’t really frequent many SoMa bars for some reason. And I’d never been to nightclub Eve Lounge, which closed down earlier this year when the owners decided to transform the space as a casual, happy hour bar with an emphasis on solid cocktails.

I was instantly at ease with the space. The wooden floors, tables and walls would send chills down any rustic atmosphere-lover’s spine, and the three or four TVs lining the walls ensure sports fans won’t miss key plays. Most important, one look at the robustly stocked bar told me I could feel confident knowing the bartenders could make any drink I desired. I mixed into the crowd of 20- and 30-somethings — all pretty much dressed like they walked right in after work, like myself — and made my way to the bar for a cocktail.

I ordered a Torero en Llamas ($11), a Corralejo Blanco tequila drink with a float of absinthe. The bartender described it as a deconstructed margarita. As I took photos of the bartender at work preparing it (and waved off others at the bar asking if I worked for 7×7), the bartender quickly said “No, wait. Wait for this.”

He then lit a match and set my drink on fire.

Now I know this is a common trick used in dive bars practically everywhere. But we’re not talking about a shot of 151 here. This drink was in a coup glass for Christ’s sake. As I sat there, with the lime in my glass set aflame, I almost didn’t want to blow it out in order to take a sip. When I finally tried the drink, the bartender was right. It tasted like a margarita without the overt salty, beachy flavor.

Then my friend Tim showed up. Being new to the old-fashionedy artisan cocktail scene (his usual drink is Liquid Cocaine), I advised him to try an ever-trusty Old Fashioned ($11), here made beautifully. We grabbed our cocktails from the bar and easily found two stools in a sweet little corner below some Transformer-eque art work.

While Time was telling me stories about bong hits, his new jeans, and Japanese card games, I kept eyeing the small dishes circling the bar — tiny sets of sliders that made me regret having a big lunch. Tim nursed his Old Fashioned, clearly not used to such a strong classic, while I tried not to gulp down the remainder of my own drink.

Next up: I ordered the Maiden Lane while, to my disappointment, Tim declined a second round for himself. (I haven’t given up on converting him to the artisan trend.) While we continued chatting about work and love, the attentive staff routinely checked back with us until my drink arrived.

Served in a mason jar, The Maiden Lane — Bulleit bourbon, strawberries, housemade ginger syrup, agave, lemon juice — is perfect for a sunny day, but probably not for drinkers like myself who aren’t huge fans of ginger beer. I quickly drank that cocktail, seeing that even though I was with company, I was drinking alone.

After paying our tab and taking a closer look at the beautiful art on the walls, we were bid farewell at the door by a quote from W.C. Fields: