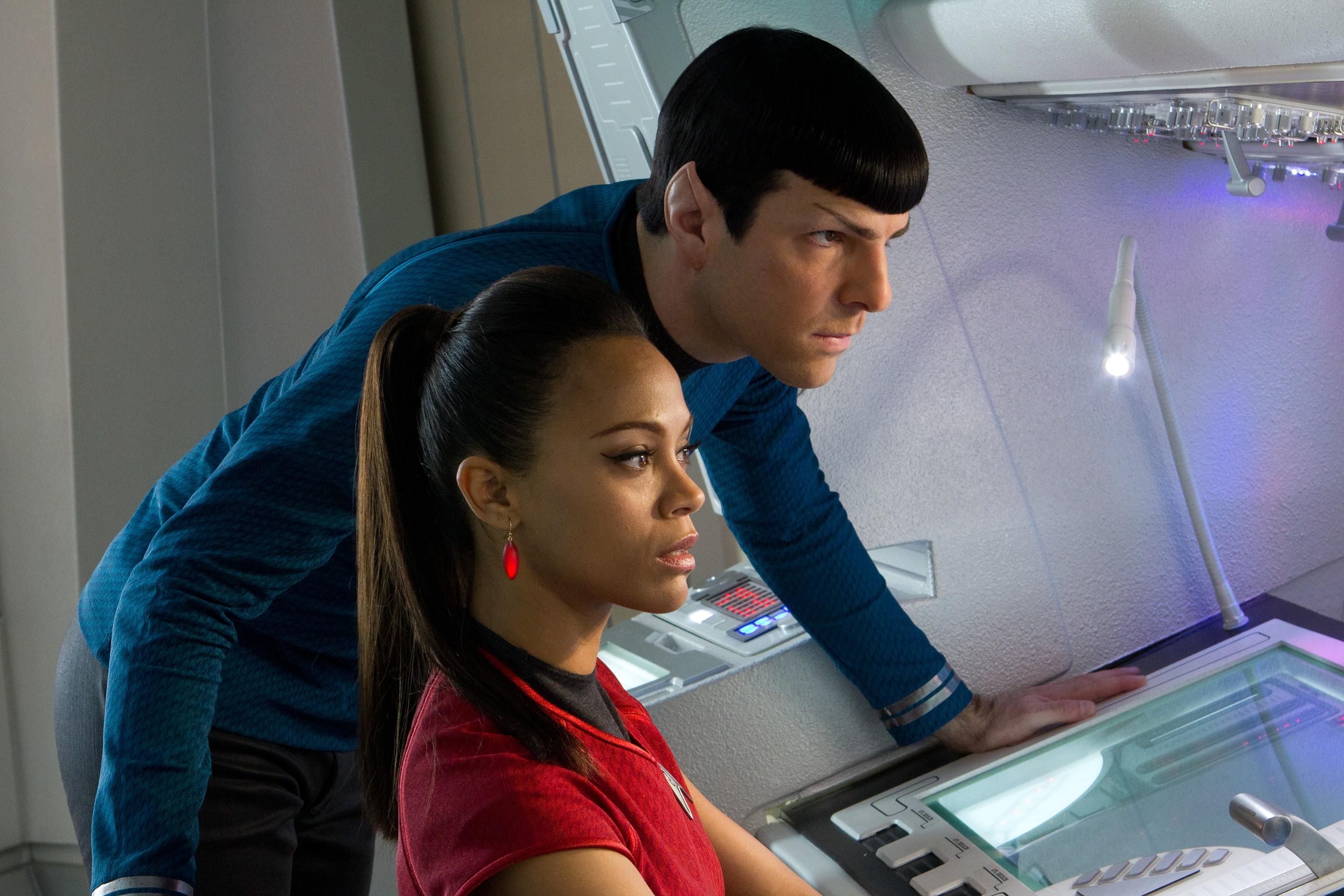 In Hollywood, summer starts in May, or even earlier … give it a few more years and there’ll be an Avengers tie-in movie ringing in the season in early February. This weekend’s “summer” blockbuster is Star Trek Into Darkness, directed by J. J. Abrams, who was recently tapped to helm at least the first film in the “Star Wars sequel trilogy.” Lotta stars in J.J.’s eyes these days. At least he’s having fun with it so far (my review of Darkness after the jump).

Also this week: he’ll soon be playing the villain in Man of Steel, speaking of summer blockbusters, but Michael Shannon first appears as a based-on-truth hitman in the very fine Iceman, reviewed here by Dennis Harvey. Also of interest, the first Himalayan Film Festival is now underway in various Bay Area theaters; I take a look at the doc-heavy line-up here.

Star Trek Into Darkness Do you remember 1982? There are more than a few echoes of Star Trek II: The Wrath of Khan in J. J. Abrams’ second film retooling the classic sci-fi property’s characters and adventures. Darkness retains the 2009 cast, including standouts Zachary Quinto as Spock and Simon Pegg as comic-relief Scotty, and brings in Benedict “Sherlock” Cumberbatch to play the villain (I think you can guess which one). The plot mostly pinballs between revenge and preventing/circumventing the destruction of the USS Enterprise, with added post-9/11, post-Dark Knight (2008) terrorism connotations that are de rigueur for all superhero or fantasy-type blockbusters these days. But Darkness isn’t totally, uh, dark: there’s quite a bit of fan service at work here (speak Klingon? You’re in luck). Abrams knows what audiences want, and he’s more than happy to give it to ’em, sometimes opening up massive plot holes in the process — but never veering from his own Prime Directive: providing an enjoyable ride. (2:07) (Cheryl Eddy)

Midnight’s Children Deepa Mehta (2005’s Water) directs and co-adapts with Salman Rushdie the author’s Booker Prize-winning 1981 novel, which mixes history (India’s 1947 independence, and the subsequent division of India and Pakistan) with magical elements — suggested from its fairy-tale-esque first lines: “I was born in the city of Bombay, once upon a time.” This droll voice-over (read by Rushdie) comes courtesy of Saleem Sinai, born to a poor street musician and his wife (who dies in childbirth; dad is actually an advantage-taking Brit played by Charles “Tywin Lannister” Dance) but switched (for vaguely revolutionary reasons) with Shiva, born at the same moment to rich parents who unknowingly raise the wrong son. Rich or poor, it seems all children born at the instant of India’s independence have shared psychic powers; over the years, they gather for “meetings” whenever Saleem summons them. And that’s just the 45 minutes or so of story. Though gorgeously shot, Midnight’s Children suffers from page-to-screen-itis; the source material is complex in both plot and theme, and it’s doubtful any film — even one as long as this — could translate its nuances and more fanciful elements (“I can smell feelings!,” Saleem insists) into a consistently compelling narrative. Last-act sentimentality doesn’t help, though it’s consistent with the fairy-tale vibe, I suppose. (2:20) (Cheryl Eddy)

Something in the Air After accidentally causing a guard serious harm during a Molotov-cocktail revenge attack on high school campus police, floppy-haired  Gilles (Clément Métayer) and his baby anarchist comrades have to scatter for summer vacation. He heads to Italy along with potential new girlfriend Christine (Lola Créton), the last one (Carole Combes’ Laure) having tripped off to London and Ibiza with her artist parents. Gilles wants to be an artist, too. As much of a narrative arc as there is here details his gradual shift from dedication to political ideology toward decisions that might help further his career and define his aesthetic as a painter (or maybe a filmmaker). Always interesting but never involving, Olivier Assayas’ somewhat autobiographical feature is a portrait-of-a-young-man exercise that’s ultimately a little too much like everyone’s freshman college year: Fascinating and life-changing if you were there, not so much if you’re just hearing someone else’s countercultural reminscences. Gilles is a petulant blank whose revolutionist convictions seem borrowed rather than felt — which may be the writer-director’s intent, but it’s hard to tell. Originally titled Apres Mai — a much more useful reference to the French far-left political tumult of May 1968 and its aftermath — this is one more cinematic attempt to encapsulate the “turbulent” 1960s (extending here into the mid-’70s) that at least fleetingly captures the era’s fluidity of sex, love, community, and ideology. And that’s far less successful at convincing us the beliefs our protagonists tout are anything more than an immature following of cultural fashion. It’s an incongruously passive movie about a time in which passion reigned. (2:01) (Dennis Harvey)

Stories We Tell Actor and director Sarah Polley (2011’s Take This Waltz) turns the camera on herself and her family for this poignant, moving, inventive, and expectation-upending blend of documentary and narrative. Her father, actor Michael Polley, provides the narration; our first hint that this film will take an unconventional form comes when we see Sarah directing Michael’s performance in a recording-studio booth, asking him to repeat certain phrases for emphasis. On one level, Stories We Tell is about Sarah’s own history, as she sets out to explore longstanding family rumors that Michael is not her biological father. The missing piece: her mother, actress Diane Polley (who died of cancer just days after Sarah’s 11th birthday), a vivacious character remembered by Sarah’s siblings and those who knew and loved her. Stories We Tell’s deeper meaning emerges as the film becomes ever more meta, retooling the audience’s understanding of what they’re seeing via convincingly doc-like reenactments. To say more would lessen the power of Stories We Tell‘s multi-layered revelations. Just know that this is an impressively unique film — about family, memories, love, and (obviously) storytelling — and offers further proof of Polley’s tremendous talent. (1:48) (Cheryl Eddy)

Sun Don’t Shine Prolific indie producer and actor (Upstream Color) Amy Seimetz’s debut as feature writer-director is a intriguingly ambiguous mumblecore noir about a couple on the run, à la Bonnie and Clyde. Crystal (Kate Lyn Sheil) and Leo (Kentucker Audley) are driving south through Florida — a state that seemingly always relaxes demands on intelligence and legality — with a handgun, innumerable anxieties, and something problematic hidden in the trunk. We gradually realize she’s unstable, though to what extent remains unclear. Seimetz’s refusal to spell out that and other basic narrative elements lends her film a compelling aura of mystery, one that heightens some striking, tense sequences but also can prove somewhat frustrating in the long run. (A little more insight would have made it easier to understand why the seemingly level-headed Leo has hitched his wagon to the increasingly off-putting Crystal.) Overall, though, it’s the kind of first feature that makes you eager to see what she’ll come up with next. (1:20) Roxie. (Dennis Harvey)