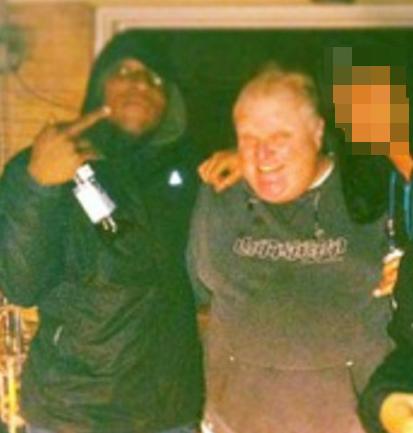 Okay: Yes, it’s really funny that the mayor of Toronto, who is an odd guy at best, was apparently caught on a cell-phone video sucking on a crack pipe. Insert jokes here. Go ahead.

It reminds me, since I’m very old, of the last crack-pipe mayor, Marion Barry, who in 1990 fell into an FBI sting when a former girlfriend invited him to her hotel room to have sex. Turns out she was an FBI informant, and when she suggested they get high before getting into bed, the fibbies caught Barry on a secret camera. Didn’t do much to harm his career — he served six months in jail and was soon re-elected mayor.

In Ford’s case, it’s hard to see how he’d even get arrested. I don’t know Canadian law, but a videotape of someone smoking out of a glass pipe isn’t legal evidence of cocaine posession (hey, it could have been medical marijuana). At this point, there really isn’t a crime. But already, there are calls for him to resign, and it’s going to be hard to put this behind him.

The interesting twist, though, is that the person who filmed him wasn’t a cop at all; it was someone else in the room, quite possibly a dealer, who was looking for a big cash score. Which could be coming — Gawker is trying to raise $200,000 to pay for the clip. (Yes, you can chip in and help crowd-fund the further embarassment of a politician!)

Now, it’s pretty likely that the person with the camera wasn’t a good-government crusader or an anti-drug type. What happened here, it appears, is someone who is either selling crack or smoking it with Hizzoner then gets into not-quite extortion or blackmail (though he might have called Ford before putting it out on the open market) but certainly a setup of another kind.

I’m not advocating that the mayor of Toronto (or anyone else) smoke crack. It’s nasty shit. But isn’t it just a tiny bit creepy that you can’t even sit in a crack den without worrying that you’re going to star in a Gawker video?

What if instead of smoking crack he’d been fucking a woman (or a guy) he wasn’t married to? Would Gawker raise $200,000 to see a mayor having consensual sex outside of Holy Matrimony? (Eeew, I don’t want to see Rob Ford having sex, but you get the point.)

I’m sorry, trolls, but I have to admit that (like pretty much everyone I know) I have done things in my life, in the privacy of my own or someone else’s home, that I don’t think should be public (crack smoking, for better or worse, not being one of them). Never hurt anyone, so it’s my fucking business. And it’s kind of creepy to think that anyone in the room could be filming me now, for all of posterity.

From now on, folks, hide the crack pipe.