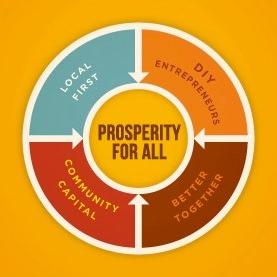 The folks at the Business Alliance for Local Living Economies were locavores before the fancy foodies ever created that word. They were talking about a new economy more than a decade ago — and their vision involves networks that are human, not just electronic.

BALLE is the heart of the movement for localism, for building economies based on communities.

Founded in 2001 by Judy Wicks, who owned a restaurant in Philadelphia, and Laury Hammel, who owned a group of sports clubs in Boston, the group has expanded to a national operation with one of its two main offices in Oakland.

BALLE offers resources, training, and connections for businesses that want to build a more sustainable economy.

The main premise of the BALLE model is the notion that businesses are best when they are locally owned, use local suppliers, and operate as part of a local community. The philosophy of the group is ecological: living economies are like all living systems, and they do better when they’re diverse and recycle energy and resources.

Not to mention that BALLE rolled out the concept of crowd-funding long before Kickstarter ever made the scene. Its built businesses that defy the traditional model — and they’ve succeeded. The group’s dedicated to sharing that vision, and the tools they’ve developed, with others.

BALLE conferences, affinity groups, and mentoring programs help individual entrepreneurs and startups — but also play a role in trying to build a more equitable, just, and sustainable economy for everyone.