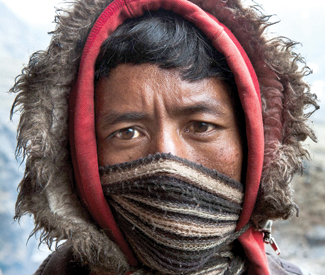 
FILM San Francisco has a lot of film festivals (understatement of the millennium), but none until now can claim to show "films from the roof of the world." The first annual Himalayan Film Festival kicks off this week with screenings in San Francisco, Oakland, and Berkeley. Opening night features the West Coast premiere of Leon Stuparich’s Road to Peace, a doc that follows the Dalai Lama on his 2008 tour of the UK.


The timing of the visit coincides with a period of unrest in Lhasa, so the trip takes on an unexpectedly political tone, with reporters pressing His Holiness to speak about "the Tibetan problem." Which he does (advocating for "meaningful autonomy" instead of complete independence from China, and emphasizing the need for "a realistic approach" to the conflict), though he nudges his message toward broader themes: universal responsibility, religious harmony, cultural preservation, the environment, and so forth.


In his wake, he leaves a trail of teary-eyed, thoroughly chuffed Brits, including Absolutely Fabulous‘ Joanna Lumley, and proves once again to be one of the world’s most laid-back leaders, with an easy chuckle that puts awed audiences at ease. No wonder he’s such a frequent, favorite subject for documentarians like Stuparich; to that end, if you’ve seen a previous film on the Dalai Lama, this genial travelogue is likely to feel somewhat familiar.


More unusual subject matter is explored in Himalayan Gold Rush, which manages to overcome its stiff, National Geographic-ish narration with a gripping narrative and quite a bit of spectacular scenery. Director Eric Valli travels to rural Nepal to investigate the lucrative yartsa gunbu, or "Himalayan Viagra" trade. Derived from a fungus-and-caterpillar situation that only occurs 5,000 meters above sea level, it’s "worth more than gold" to herbal-remedy shops that cater to rich Chinese clients.


Medicinal claims aside, much of its value is due to the fact that it’s incredibly rare, as well as back-breakingly difficult to harvest. Himalayan Gold Rush zeroes in on a few different foot soldiers, including a father with two young sons who worries about the mountains’ rapidly dwindling yartsa supply — even as he gambles away the family’s meager earnings in a dice game — and a man who rides from camp to camp, buying the crop to sell to his boss, an exporter, in Kathmandu. This, too, is perilous work, with armed guards necessary to protect large parcels of the precious stuff, which to the untrained eye resembles dried-up tequila worms.


An entirely different Nepalese story unfolds in The Sari Soldiers, a 2008 film that focuses on the country’s turbulent political unrest in 2005-2006. It begins with a reminder about the 2001 Nepalese royal massacre, in which the country’s crown prince shot and killed nine of his family members, then himself — or so goes the official version of the controversial tragedy (where’s the documentary on that, by the way?) It then explains how the slain king’s unpopular brother ascended to the throne, and a few years later, amid a Maoist insurgency, claimed "absolute power" for himself.


With this chaos forming a potent backdrop, The Sari Soldiers highlights six women whose different viewpoints make for a remarkably even-handed doc. Not only does filmmaker Julie Bridgham make great use of handheld footage taken amid tense, anti-monarchy student demonstrations, she interviews both a Maoist soldier and a Royal Nepalese Army soldier. Most powerfully, she traces the struggles of a human-rights lawyer who advocates for the country’s alarming number of people who’ve been "disappeared" by the government, including the 15-year-old daughter of another of Bridgham’s subjects.


Other intriguing entries in the small but promising Himalayan Film Festival line-up include another doc about the Nepalese civil war, Beneath Everest: Nepal Reform; a doc about Tibetan athletes’ attempts to earn representation at the Beijing Olympics, Leaving Fear Behind — whose director was jailed because of the film; and, among a handful of narrative works, Old Dog, about a family at odds over the treatment of their much-cherished dog (a Tibetan Mastiff, natch).