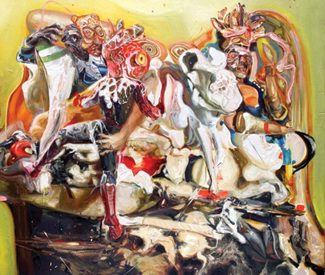 VISUAL ART It’s art fair time again. Last year there were three, this year there are only two, though it looks like artMRKT, which is taking over now defunct SF Fine Art Fair’s slot at Fort Mason, has pretty much absorbed the former’s area galleries. ArtPadSF, the more festive of the two fairs, will again be renting out all the rooms at the Tenderloin’s Phoenix hotel. (Both fairs run Thu/16-Sun/19). I can’t help but wonder, will there be synchronized swimming again in the pool this year?

>>View a slideshow of our fair picks here

Say what you will about whether or not art fairs are a reasonable way to actually engage artworks in a serious way (read: they’re not), they do offer exposure to people that are worth knowing more about. With that in mind, here’s our locals only guide to Bay area artists — some emerging, some established — whose work you can catch at the fairs.

Benson’s sometimes gooey, sometimes crunkly digital video/experimental software work breathes some ragged, frenetic energy into the standard trope of “relationships between the body and technology.” His piece is scheduled to be projected from the Phoenix onto the six-story building next door at 8pm, Thu/16-Sat/18.

Frischmann’s paintings look like something that one of those spiders on Benzedrine would make. If it lived inside an Etch A Sketch. And used neon spray paint. During a dust storm. Trust me, these are compliments.

Hevel makes collaged sculptures and sharp pop abstract paintings, usually riffing on American celebrity. His work at the fair will be very MTV 1983.

Will Oaklander Hove be showing one of his intensely drugged up fanged wall cakes, a knotted rope work installation, or a surrealism-on-meth painting? Yeah, it all sounds good to me, too.

Loftus does photorealism pretty much the right way, by marrying intense attention to detail with an obsessive and neurotic subject matter that crawls under your skin ever deeper the more time you spend with it. While you’re in Gregory Lind’s space, also check out Thomas Campbell and Jovi Schnell.

Momchilov queers punk and rock fandom in the traditional sense of the word, meaning his paintings and sculpture snatch and redirect standard accoutrements of punk fanboys and girls to point that hardcore laser focus in new directions and at more fey subjects.

I won’t blame you one bit if you try to lick Renfrow’s luminous, vibrating color field abstractions. His meticulous, precise, wondrous paintings are like visual everlasting gobstoppers, and I fully expect that by the time I see ’em, they’ll have a layer of saliva all over.

Runcio makes incisive 2 and 3D work that takes traditional hardedge abstraction in the art concrete vein, shacks it up with remnants of urban architecture, and has a post-formalist lovechild.

The fair’s Collector’s Lounge will be showing Arnold’s video created to accompany the richly saturated, haunting landscape photos that will be showing offsite at the gallery.

Charney’s complex photographs were the single most outstanding thing I saw last year at ArtPad. That’s complex like a personality, not like your taxes. A year later, I’m prepared for the brainfreeze again.

Curreri’s precisely conceived conceptual color and abstract works are subtle in that they tend to yield only small nibbles at first pass, but they’re deceptive that way, and usually end up smacking you around by the time it’s all over.

DiCioccio has recently been applying her super-meticulous needlework to fastidiously x-ing out individual letters in pages of books, as an act of both scrutiny and physical redaction of the received, mediated world.

Somewhere in the Hamptons summer home where Glenn Brown and Lucian Freud are renting with Mark Tansey and Matthew Day Jackson, Hagler is stoned on the couch making fart noises with his armpits. That is also a compliment.

Sure Gallery Paul Anglim shows Barry McGee, but I’ll be looking at the Rojas paintings, whose hard edge and off-kilter abstractions of interior architectural spaces are spot-on and mesmerizing.

Rosenblum switches up hyperanalytical and conceptual works that incorporate research, crowdsourced interactions, and photography. I’m hoping to see images from a series of recent photos that work Flickr comments into the image.

I can’t wait to examine Hart Stone’s paintings up close, which in the past have been made by repeatedly transferring or printing antique images in rows onto canvas. Also at Brian Gross are Bay Area stalwarts Roy de Forest and Robert Arneson.

Traugot combines found organic objects with crochet. I know what you’re thinking, but this is not a Portlandia skit. She does it the right way, promise.