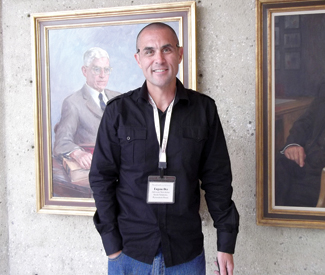 With my partner-in-crime Keith Chandler at the wheel, we’re driving through San Francisco on our way to Stanford University Law School for the Three Strikes Summit, a deeply personal topic to both of us. Three Strikes is partly why I served 15 years in prison, and Stanford’s Three Strikes Project is a big reason why I was released earlier this year.

Chandler is a renowned activist, ex-lifer, and my comrade in the struggle to reintegrate inmates back into life in the outside world. I have become a fanatic on a mission, and this May 2 event will feature many of the top criminal justice players responsible for last year’s Three Strikes reform measure, from Attorney General Kamala Harris to San Francisco District Attorney George Gascon.

So the path we carve through the City takes us deep into the heart of the reform movement that changed my life. Change is in the air, and I’m following the scent back to its roots.

Three Strikes as a metaphor made perfect sense. In the 1980s, the justice system was a revolving door. Relatively short sentences for serious and/or violent crimes were the norm, sentences often cut in half by parole. Lengthy records of arrests and convictions fueled a movement to get tough on crime.

As per usual, bad things happened. In 1993, sexual predator Richard Allen Davis killed Polly Klaas, a 12-year-old girl from Petaluma. A general consensus formed that repeat offenders needed to be punished to the fullest. So prison industrialists came up with a catchy solution: three strikes and you’re out. Commit three violent crimes, the authors sold to the public in 1994, and you’ll serve 25 years to life.

However, the fine print expanded the concept to any third felony — even crimes that would be misdemeanors to non-parolees — and California’s prisons swelled.

In many ways, I was a Three Strikes poster child. As a wild youngster in Sacramento, I was a menace. At 18 in 1984, I began a four-year spree of crimes that included armed robbery, assault with a deadly weapon, and residential burglary. For those transgressions, among others, I received a 12-year sentence in 1988.

I embraced sobriety, college, and writing as I served six discipline-free years. Back then, we had a right to participate in rehabilitative endeavors. Effective programs like cognitive restructuring and life-skills classes might have been foreign concepts, but I benefitted from college, weight training, and family visiting.

But I was still trapped by my criminal thinking — plagued by my nefarious associations. Though I hid it well, I was all fucked up.

In 1994, I was paroled into a whole new ball game: the era of three strikes. As soon as the law passed, the horror stories began to amass. Guys were being struck out for stealing from stores or possessing small amounts of drugs. California became the republic of the intolerant. Mired by myriad imperfections, I stepped up to the plate and swung for the fences.

In my broken way of thinking, I convinced myself that supplementing my income made perfect sense. In reality, it was an excuse to get high for free and it all fell apart. Two parole violations for drug cases seamlessly lead to a felony drug case in 1999. I went from baller to squalor, and hit a line drive right to the catcher. I struck out and faced a lifetime behind bars.

When my life came to an end, I chose to change the rules of my game. I found purpose by advocating for my demographic. As the system began to shift towards smart-on-crime principles in the mid-’00s, I managed to shift with it. My two-pronged litigious and literary activism — a lifestyle that regularly put me at odds with my captors — morphed into rehabilitative advocacy.

As a result of voters approving Prop 36 last fall, my life sentence was lifted on March 22. The merits of my rehabilitative record coalesced with a successful one-time review. As I walked out of prison a week later and jumped into the arms of my childhood sweetheart, I told Charlotte, “Let’s get the hell out of here before they change their minds.”

After all the craziness of 15 years of incarceration, I have been decompressing in a transitional housing program. With a bachelor’s degree and multiple drug counseling certifications, I’m establishing myself as rehabilitative consultant. Moreover, I received the ultimate welcome home gift when The Sacramento Bee covered my reentry.

As we arrived on the Stanford campus, I thought of the friends and foes I left behind in prison. To me, this is serious business, a personal progression of nonstop advocacy. Keith’s gig as a criminal justice consultant now includes a new task — delivering me into the apex of reform.

Stanford Law School started the Three Strikes Project in 2006. The human lessons learned from securing the release of 26 three strikers motivated project director and law professor Mike Romano to shift tactics. He decided to take a bigger swing at a very bad law. By avoiding the mistakes from a catastrophic 2004 reform initiative, Romano could secure the release of thousands rather than dozens.

The project decided a narrowly drafted initiative would have the best chance for success. To qualify for a reduced sentence, minor third strikers without murder or sex offenses in their backgrounds would be vetted by the courts to determine whether they currently posed an unreasonable risk to public safety. He took down one of the nation’s toughest laws with 69 percent of the vote.

Of the 9,000 three strikers in California prisons, Prop. 36 made nearly 3,000 eligible for review. On the day of the summit, a prison official reported 460 had already been released — a number that will climb daily. While most counties have over 100 candidates — and some hotly contested cases are on the horizon — Los Angeles has a staggering 1,325 cases. San Francisco, by contrast, only has two, the result of SF’s sober, compassionate approach to charging three strikes cases.

Hearing the statewide cries from their landmark measure, Stanford invited all relevant parties to discuss how to move forward. Harris, the keynote speaker, wrapped her entire speech around a unique prosecutorial career that began in San Francisco.

As the author of Smart on Crime: A Career Prosecutor’s Plan To Make Us Safer, Harris models cutting-edge thinking as the state’s top cop. She pursued data-driven policies as she learned to look at “other issues through the lens of public safety.” By doing so, Harris avoided the sensationalism mentality that leads to hyper-incarceration.

Her successor, Gascon, followed her approach. Research showed Gascon that “higher levels of incarceration don’t translate into increased public safety.” So he teamed up with Stanford, the NAACP, and other like-minded officials as early supporters of the Three Strikes Reform Act of 2012.

Overall, the summit included a range of panelists who discussed a number of relevant topics. But how to adjudicate all these cases was juxtaposed by the need to find resources for reentry services. Stanford professor Joan Petersilia has been instrumental in every recent criminal justice policy change in California, and she warned of the need for more reentry programs.

“What goes down can easily go up,” Petersilia said, warning the crowd about prison populations and crime rates. “Roughly $1 million is being spent on the average three striker, and zero is being spend on their reentry.”

Most of us are being released without any supervision or any type of state or county funds associated with probation or parole. Since we have far exceeded our sentences, the average three striker is leaving prison with little to no resources, let alone being able to tap into existing programs. I’m paying for my program out of my own pocket.

While it took decades to create the worst justice and prison system in the country, it’s definitely going to take years to correct. I advocated for more than a decade while buried under draconian measures buttressed by dreadful prison policies. Thus, I am excited groundbreaking issues are being discussed by people like this.

For those officials still trapped in their broken thinking, I also know how hard it is to abandon criminal thinking. However, like Gascon said, “Prop 36 is changing the metaphor.”

Seated in Keith’s sports car with the top down, we are making our way up 280 towards the city. Heading back home to Sacramento, I felt like a passenger on the Titanic with an alternate ending. While I am still in the honeymoon stage of my reentry — and reluctant to let this feeling go — I am at the beginning of a new era. We all have work to do.

My life of crime and activism has been an open book — and so is my reentry. After spending the day with journalists and actors in the field of justice, now I feel an even greater obligation to repay my debts. For the first time the light at the end of the tunnel is no longer blurred by the cold hard steel of the penitentiary, or maintained by tone-deaf policy-makers.

I still can’t believe it — I am free.