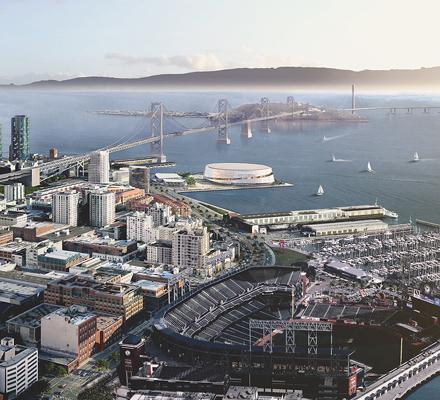 So the Chronicle’s John King (who’s generally not a bad architecture critic and really seems to understand city planning) finally discovered something that some of us have been talking about for months: There’s no comprehensive planning on the waterfront. Instead, it’s all developer-driven projects that make little sense as part of a well-thought-out future for the area.

Once again, we are hampered by the Chron’s paywall, so unless you subscribe you can’t read the whole story. But here’s the gist of it:

Instead of mapping out how the next frontiers of growth should be filled in, Mayor Ed Lee’s administration is letting developers frame the debate. They select a site, cook up a proposal and then see what will fly.

He notes that there are good touches in the new Warriors proposal, although:

[N]obody envisioned an 18,000-seat arena on a pier until the Warriors called City Hall. The team loved the glamour of the camera-friendly location. The Lee administration saw a chance to fill a void left open when the America’s Cup organizers shifted gears. …. the whole effort is aimed at soothing objections to what the team owners want. It isn’t connected to a pre-existing vision of what this part of the city could be.

There have been successful community-based planning efforts in other parts of town. But the waterfront — which is unique and immensely valuable — is nothing but a collection of projects that developers want. And Lee is going along:

Today, instead, we have a mayor’s office that wants to make things happen. Progress is measured in terms of construction jobs, housing units and new buildings that might lure the likes of Google up north. Planners on the city and state payrolls are put in the reaction mode, massaging the details the best they can.If this continues, some of what gets built could be terrific.Some of it could also be an alien presence in the city around it. And that’s not a legacy that any mayor should want.

It’s all too reminiscent of Dot-Com Boom I, when Willie Brown was in charge and city planning was driven entirely by campaign money. Highrise office buidlings in the residential Mission? No problem — just wave the dollars in front of the mayor. Not saying Lee is that corrupt — but he’s so excited about building stuff that he can’t bother to take a step back and ask: Is this the city we really want?