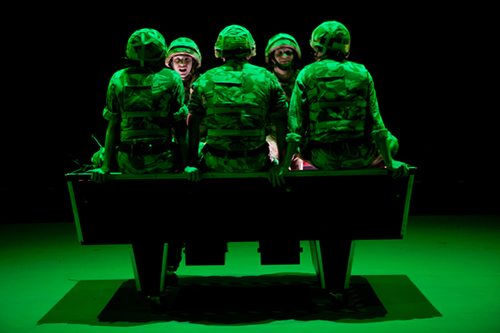 If you thought the theatricalized story of a jaunty and imperiled Scottish regiment in Iraq in 2004 would come off as a sort of “Trainspotting meets Black Hawk Down,” you wouldn’t be too far off the mark — in a very positive way. I’ll leave the nuts and bolts reviewing of full-force National Theatre of Scotland via American Conservatory Theater’s spectacular “Black Watch,” (through June 16) presented at the huge Mission Armory, to my colleague Robert Avila in next Wednesday’s Guardian. But my first thoughts upon emerging from Sunday night’s opening performance, after I cleaned the constant stream of expletives from my ears (and a bit of something from my eye) is that yae fookin’ coonts moost sae this pish, i.e. the production and performances are well worth the gasp-inducing $100 ticket price.

As is, I guess, a reminder of the — hey, ongoing! — sorry state of our “misadventures” in that part of the world. Ten years later, we have to drop a Benjamin for a complex, moving, and engrossing take on what just happened, or any take whatsoever, pretty much. That it also includes a lot of nifty multimedia effects (a surprisingly malleable pool table basically co-stars), affecting and thrillingly performed choreography, a bit of fascinating history, and some old Scottish ballads — oh yes, there will be bagpipes — is icing on the erroneous Occupation.

Less plot-driven than situation-oriented (within the framing device of a “researcher” interviewing former squadron-mates at a pub, the story of the 300-year-old Black Watch Scottish fighting force’s dissolution in Iraq is told through clever reenactments), Gregory Burke’s play, first performed in 2007, keeps its ideological cards tucked slightly up its sleeve. But it pulls no punches when it comes to the hella screwy “facts” on the ground. It also toys with the Mametian trope that language is a real sharp double-edged sword, especially the language of power in crisis, when all the misogyny, homophobia, sexphobia, and racism comes howling through the seams of ballsy mens’ speech. One wondered how the more delicate members of A.C.T.’s regular subscription audience was taking all the “fucks,” “cunts,” and every other realistically used expletive, all fenced in by a true yet penetrable thicket of brogue.

The location also resonates with military history, of course. It was built in the early 1900s to help quell any union strikes or labor demonstrations downtown  … with hundreds of troops armed to the teeth. The wee irony of a play about an occupation staged here isn’t lost. But the genius of the location comes through in other ways. On first hearing ACT was hosting the play here, I immediately thought it would involve dozens of extras and a full orchestra. The play, however takes place in a modest (if very large compared to other locations) draped off part of the armory, and the often-eerie backing music is recorded. It is up to the cast, numbering a mere 10, to bring a full war and its aftershocks to a life big enough to fill the physical and mental space, which they do with aplomb.

They’re aided by a panoply of well-executed mulitmedia efects, culminating in a series of tragic explosions that ripple outward into the Armory’s enormous space. Those explosions can’t help but remind of the recent Boston marathon explosions, permanently televised into our senses. So much blood, so many severed limbs, the media and government weren’t afraid to show us in that bombing earlier this year. And yet 10 years ago, I remember seeing hardly any blood at all, let alone any troops’ bodies, in the long, long, then too-short coverage of the “Iraq War.” How far we’ve come, and haven’t come at all since then, “Black Watch” reminds us.