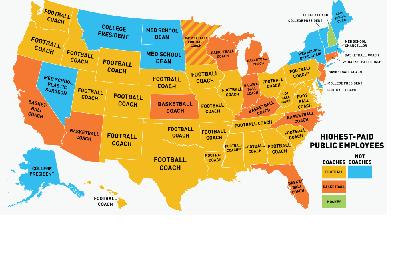 Before you start griping about ovepaid Muni drivers and public employee unions, you might want to take a look at this neat-o map that shows who the highest-paid public employees are in every one of the 50 states. Hint: It’s not a bus driver. Or even a cop or firefighter:

You may have heard that the highest-paid employee in each state is usually the football coach at the largest state school. This is actually a gross mischaracterization: Sometimes it is the basketball coach.

In fact in 40 of the 50 states, the highest-paid person runs a collegiate sports operation. The other ten are doctors running medical centers or, in a couple of places, college presidents.

Oh, but aren’t those people earning their money by bringing in the big bucks? Maybe; maybe not:

(Oh, and what’s up with New Hampshire, where the guy making the most money coaches hockey?)