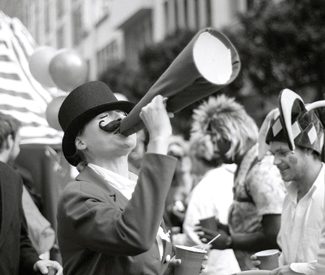 VISUAL ART Dottie Guy had a difficult time in 2006. In addition to the death of her grandfather, she was recovering from surgery for an injury to her ankle and foot that she had sustained on duty in Iraq. She started taking pictures as motivation to walk around and to reclaim a sense of purpose.

This year, Guy is one of the artists participating in a one-night art exhibition presented by Shout!, an initiative to support female veterans in the Bay Area. Primary organizer Star Lara asked Guy to submit a photo to an event that, in its fifth year, will include several different media — photography, painting, sculpture, drawing, writing, and music — made by 22 vets. As a result of Lara’s outreach efforts, this year’s event has grown so much that she had to turn artists away.

Lara is the Women Veterans Coordinator at Swords to Plowshares, a nonprofit that helps veterans transition back to civilian life. Leaving the military in 2007 after serving on active duty for 12 years, she knows the hardships of adapting, particularly those that affect women. As more women enlist, she explains, the gender-specific problems become increasingly defined. Female veterans now represent the fastest growing homeless population, yet they seek help through Veteran Affairs at far lower rates than men do.

Issues also stem from public perception. People understand what it means when they see a man with a military pin, but Lara often hears the question, “Is your dad in the military?” Society resists the idea of a female veteran.

And when civilians do know about a woman’s military service, another problem arises: the tendency to reduce all aspects of her persona to her veteran identity. For Guy, the exhibition provides an opportunity to showcase another side of herself. Though her life revolves around veterans — she works at the VA — she is also a photographer, and her photography does not directly address military service.

Guy snapped her Shout! photo at Bay to Breakers a couple of years ago when she stumbled across a woman in a top hat and fake moustache shouting into a bullhorn next to a man wearing a polar bear mask. It is a quirky image one could find in few places besides San Francisco. “I embrace the ridiculous stuff,” says Guy. “Being in the military, there’s not much room to celebrate that. You’d never see somebody walking around in a mask like that, unless it meant trouble.”

Another Shout! artist, JoAnn Martinez, has only recently begun to experiment with military subjects. For her second year in the show, she has submitted comics derived from dialogues she has heard within the female veteran community. By undertaking this new comedic mode of art, she hopes she can not only share a creation she’s proud of besides her family and work (she started the nonprofit Women Veterans Connect), but also communicate a digestible message to the non-veteran community. “Instead of complaining, let’s laugh about it,” she says.

Not only do Martinez’s comics convey a therapeutic levity, but they also contain an expressive subtext; they are printed on homemade paper created in response to the Combat Paper Project, in which workshops instruct veterans how to create paper pulp from their shredded military uniforms.

Extending the practice beyond Shout!, Martinez is seeking female veterans to submit stories about their uniforms for a Shotwell Paper Mill limited-edition book created using the same fabric-turned-paper method. So far, the stories range in tone, some reflecting a similar lightness to Martinez’s comics; one woman tells how after she painted her toenails, the Iraqi heat melted the polish and she had trouble removing her socks.

Lara has also participated in the project, an experience she found restorative in part because it involved breaking down and reclaiming an object laden with intense experiences, but primarily because of the work’s collectivity. After talking with fellow female veterans while their hands were busy cutting, she says, “It was no longer about the trauma that brought you to the table — it was about what you took from the table.” (The Combat Paper Project also inspired Lara’s contribution to this year’s Shout!, a piece that involved her “painting the shit out of” her last uniform.)

Though Lara does not consider herself a fine artist, Shout! presents an opportunity to share the voice of her small group within a greater context. In the Women’s Building, a hub of action in the Mission, the event will enact her idea that women veterans comprise a subset of larger existing communities and should be reached as such.

Lara says that without focusing on trauma, without involving policy, services, or outreach, Shout! offers a chance for artists like Guy and Martinez to declare, “I am a woman and a veteran, and here’s how I express myself.”