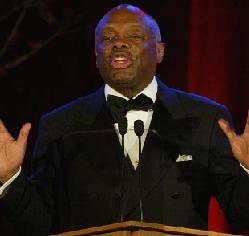 The internal report on SF Housing Authority management berates ousted director Henry Alvarez as a jerk and a bully, somone who made racist and homophobic comments and intimidated staff. But the report also shows exactly how the corrupt politics of San Francisco contracting works. You can’t read the whole Chronicle story because of the paywall, but I’ll excerpt the part that matters:

In another instance, Larsen said Alvarez had him resolicit bids three times for a contract to provide security at public housing projects. Alvarez later called Larsen into his office and said he had just returned from lunch with Chronicle columnist and former Mayor Willie Brown where he met Stan Teets, who runs the private security firm Personal Protective Services, which was not poised to win the contract, the report said.

After PPS failed to win the contract, Larsen said Alvarez told him to start the process over a fourth time, the report said.

Alvarez denied to investigators that ever happened.

Brown, when reached on his cell phone, said: “I can’t talk to you. I’m at a luncheon.”

Check that out: Brown — who works for the Chronicle as a columnist — said he can’t talk to a Chronicle reporter because he’s at a luncheon. BTW, he’s used the exact same excuse with me a bunch of times, including once at 4pm. He has a lot of luncheons. And they seem to last most of the day.

And let’s remember: in his columns, Brown has consistently made excuses for Alvarez and gone out of the way to tell his side of the story.

PPS has had serious problems with its work at the Housing Authority in the past, when Teets was hired by Brown’s hand-picked authority director, Ronnie Davis. Now Brown meets with Alvarez — who he defends in his column — and tries to get a contract for a firm with a shaky history that wasn’t the low bidder.

Is PPS one of Brown’s private law clients? We don’t know — the Chron doesn’t require him to disclose that information.

But we know this is fucking sleazy shit, and it’s exactly how the city worked every day when Brown was mayor — and apparently, it’s how things are working again, now that Brown’s pal Ed Lee is mayor. I give Lee credit for ousting Alvarez and shaking up the Housing Authority Commission, but by the time he did that, he really had no choice — the evidence and the mounting media pressure was overwhelming. And Willie clearly still has his hands in the operations of the city.

All this is happening at the same time that the Columbia Journalism Review has taken up the issue of Brown’s column and the truly shady ethics involved.

I had a lot of gripes with Mayor Gavin Newsom, as all of you know, but when he was mayor, this kind of pay-to-play overwhelming sleaze wasn’t the order of the day at City Hall. Now it’s back.

That’s how it works in San Francisco in 2013. How lovely.