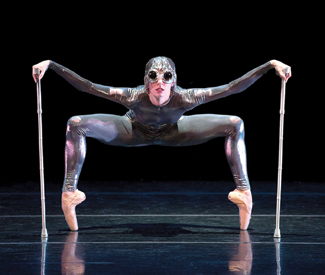 DANCE When Charles Anderson returned from a performing and choreographing career in New York 11 years ago to start a chamber-size contemporary ballet company, it seemed fair to wonder whether the Bay Area really needed another one. In the intervening years he certainly, and justifiably, has put his Company C Contemporary Ballet on the map. He assiduously assembles contemporary choreography that, at the very least, has a tenuous relationship to ballet. If there are missteps, and there are some in almost in every program, he nonetheless manages to offer a generous and broad spectrum of perspectives. You walk away glad that you came.

In the most recent program — which was performed in San Francisco May 2-4 and travels to Walnut Creek this week — his dancers dove into a smorgasbord of world and company premieres with gusto. Only Anderson’s own 2007 Boléro, choreographed to you-know-what, has been previously danced by this well-trained troupe.

What Anderson has not yet found is a good (and affordable) San Francisco venue to showcase his fine company. This season he tried out Z Space, an inviting theater, albeit one that could benefit from updating its lighting system. And for ballet dancers, who often have flying exits, Z Space’s lack of wing space is a problem. Momentum needs to be truncated to avoid crashing into the brick walls.

Company dancer David Van Ligon’s world premiere, Natoma, in particular needs to be seen on a more suitable stage. Set to an odd assemblage of scores by iconoclast composer Zoe Keating, Natoma runs out of steam about halfway through. Yet this is an honest attempt to deal with traditional structures seen through contemporary eyes. Laura Hazlett’s simple costumes (black bathing suits for the women, tights and white top for the men) nicely highlighted the dancers’ lines.

Van Ligon bowed to convention with a central pas de deux (for gorgeous Edilisa Armendariz and Connolly Strombeck), and three couples and a female duo (Laura Dunlop and Kristin Lindsay) that also framed the pas de deux. Yet he reconfigured this set-up into a number of ever-changing variations that gave Natoma a satisfying sense of elasticity. Wisely, perhaps influenced by Keating’s stab at minimalism, he pared down his vocabulary to basic steps and unisons in conjunction with flowing arms. Still, at times one wanted more richly textured choreography. Pleasing was the design’s clarity, though it put in relief both the dancers’ strengths and their weaknesses.

The appropriately-named A Modest Proposal, from John Bohannon (concept and text) and Carl Flink (direction and choreography), was a fresh, clever, and amusing smashing of verbosity against the succinctness of art, entertained without a whiff of Swiftian sarcasm. Trying to explain complex scientific facts with more and more words, and worse, with PowerPoint, is useless, narrator Ryan Drummond. Do it through dance. When the ensemble, having swirled around Drummond, stepped out of their overalls and into Hazlett’s diaphanous white for an airy, fluid finale, you could almost believe him.

Dennis Nahat’s 1970 Ontogeny — named for the process of life forms’ individuation, in case you slept through biology class — received a stunning interpretation. Using Karel Husa’s densely-layered, Pulitzer-winning String Quartet No. 3, Nahat excellently drew on the resources of modern dance and ballet to suggest eroticism and struggle as a biological necessity. With a powerful and nuanced Jacqueline McConnell and a vulnerable and athletic Tian Tan in the leads, Nahat’s angular yet expansive choreography looked as vibrant and edgy as it must been over 40 years ago.

A surprise addition was Anderson For Your Eyes Only, a splendid duet, originally performed for a hearing-impaired audience. Chantelle Pianetta and Bobby Briscoe, he a head taller than she, sensitively explored the give and take of an on/off relationship. Performed in silence, you heard their footfalls, the exertion of their breath, even the swish of their pants.

Anderson’s Boléro closed the program. It’s a good enough Spanish-flavored work for an over-used score. But perhaps it’s one that choreographers just have to get out of their systems.

Lesher Center for the Arts