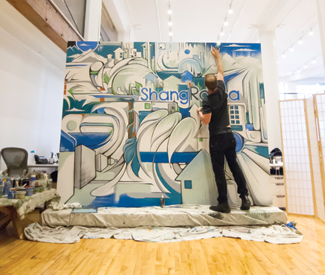 STREET SEEN The mural was neatly rendered in aerosol, with an expert’s eye for color. It read “Facebook.” Surrounding text bubbles proclaimed “poke,” “write on your wall,” and “I’ll find something to put here” to the denizens of Sixth Street.

Tech-based graffiti? If you’re up on the Bay Area art scene, the juxtaposition won’t come as any surprise — the companies building the Internet have emerged as major supporters of professional street art.

“The influx of tech companies has affected our business at all levels,” says Daniel Pan, founder of SoMa’s 1AM Gallery. Pan and his team exhibit works by local graff legends and recently came under attack by conservative SF Chronicle columnist C.W. Nevius for 1AM’s retail space, which sells one of SF’s best selections of street art sprays and tools.

The gallery also facilitates corporate graffiti workshops like the one that gave birth to the aforementioned 2010 Facebook mural, and arranges custom murals for techland’s stomping grounds. Last month, the gallery released a mobile app perfect for capturing, cataloguing, and searching for one’s favorite pieces of street art all over the world.

“On a very fundamental level, tech has allowed the street art scene in San Francisco, and worldwide, to spread faster and further than ever,” Pan says.

1AM is by no means the only site of this pairing. Though Facebook may have led the way for the tech-street art connection, having tapped artist David Choe to do its office walls back when the company was still in its Palo Alto offices, you can now see murals in the YouTube office park — and in many tech companies across the Bay.

Among the experts with whom I spoke for this story, many attributed the trend to the fact that the new tech elite is much younger than the leaders in other industries.

“They share a lot of the same values,” Vikki Tobak of the Palo Alto Arts Commission told me. “[Street art] is young, DIY, there’s no pretense. It’s very ‘of the generation’ in terms of who works at these companies.”

Tobak points to various ways the two worlds are interfacing. Eyebeam’s Graffiti Research Laboratory is the maker of “L.A.S.E.R. Tag,” a system that allows artists to project digital tags onto buildings from a distance of hundreds of meters. Re+Public’s reality augmenting mural app allows street art fans to travel through time at NYC’s famed Bowery wall and digitally hallucinate via animations and 3D effects in Miami’s Wynwood Walls mural complex. Locally, Tobak sees the in-progress University Avenue tunnel mural project that will transform a major pedestrian connector in one of Silicon Valley’s first cities as an example of how street art-style work has gained traction among techies. Zynga neighbor Project One Gallery hosts tech happy hours within walls covered in murals by acclaimed visual artists.

Contemporary SF gallerist Catharine Clark says it would be a mistake to say that street art is the only art form in which the tech community is interested. The annual Zero1 art-tech festival (www.zero1.org) explores a vast array of art forms, and few street artists are included on the program. The high-powered tech couple of Yahoo CEO Marissa Meyer and investor-philanthropist Zachary Bogue will chair this week’s opening gala of SF’s artMRKT art fair. Clark says as wealthy techies age, their taste for art will mature as it does for any collector. But she does see a logical reason behind any propensity that does exist to line programmers’ offices with works once seen on the blocks of the Mission District.

“I would imagine if you’re a company in the Bay Area and you’re thinking about what’s been endorsed on a larger level of the art world outside the Bay Area, it would be the Mission School aesthetic,” she tells me in a phone interview. “That has been accepted by the art world, but still has something youthful and cool about it.”

Many of the mural artists who’ve been closely tied to the tech community have little to do with street art’s historical legacy.

Ian Ross has found major success in his fluid live paintings, landing a year-long residency at the current Facebook offices after one of his live works proved popular at the company’s campus café. He’s since done work for AdRoll, Lyft, Livefire, and other firms. Recently, he and wife Daniele Rocha opened a gallery in the tech-heavy neighborhood near AT&T Park where they highlight other artists’ works, many of whom have found similar levels of support working for tech companies and collectors.

“People really respond and appreciate street art in the tech world,” Ross says. “It’s a much more unpretentious format. People don’t need to know anything about art to get something out of the experience.”

“Ian’s work is vibrant, energetic, and his style is flexible and adaptable,” writes AdRoll president Adam Berke in an email shortly after our photographer captured shots of Ross creating a looping green and black piece during an AdRoll office party. “We think these attributes match our own values as a company and are common characteristics among the people that work here.”

But Ross is also quick to note that what he does is different than, say, the artists of Wild Style. “I personally don’t think one should call themselves a street artist if they are producing this work completely legally,” he says. “[Street artists] often work against a lot of dangerous variables to make their work viewable in public. I appreciate the risks they take to do this.”

Does it still count as street art when established subway writer Lee Quiñones paints the rooms in what became Sean Parker’s Greenwich Village “Bacchus House”? What about when Facebook employees are taught the fine art of stencil-making? What do you call art that looks similar to the illicit works of graffiti’s past, but is done in a context completely divorced from shadowy trainyards and unguarded rooftops?

As San Francisco culture continues to form around the rise of tech, street artists and their fans are far from the only ones pondering the importance of form versus function. At the very least though, we’re guaranteed some pretty walls.