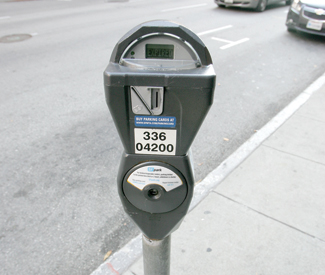 
This was the moment these indignant motorists had been waiting for. The elected supervisors were finally going to get the unelected bureaucrats at the San Francisco Municipal Transportation Agency to back off of plans to manage street parking and install new parking meters in their Western SoMa, northeast Mission, Potrero Hill, and Dogpatch neighborhoods.


Anger and frustration over the parking program has been building for more than a year (see "Pay to park," 1/24/12), and when Sup. Mark Farrell called a May 2 hearing before the Neighborhood Services and Safety Committee, SFMTA’s critics put out the call and dozens showed up to voice their displeasure.


Farrell opened the hearing with a clear statement about where he stands on the issue: "I am very much against expanding parking meters into our residential neighborhoods." He also expressed opposition to the SFMTA’s extension of meter hours to evenings and Sundays and said that would be the subject of another upcoming hearing.


"I think we’re frankly on the wrong track," said Sup. Malia Cohen, who isn’t on the committee but showed up just to voice the frustrations of her District 10 constituents and to help grill SFMTA head Ed Reiskin. She repeated the populist criticisms of the SFMTA, calling its goals "unattainable" and its critics "reasonable," and accusing the agency of not having a comprehensive parking management plan.


"I look forward to you saying, ‘I quit, you win, no more parking meters,’" Cohen said to Reiskin, throwing red meat to the seething crowd, which erupted into loud, raucous, sustained applause and shouts of appreciation at the comment.


Those comments frame a defining problem in San Francisco: The city can’t get to its sustainability and climate-change goals without reducing car use (see "Zero-sum future, p. 12) — but even mild attempts to reduce parking create populist furor.


When Reiskin took the podium to deliver his presentation, he struck an even, diplomatic tone, saying that he understands people’s concerns about the issue. "Parking is a challenging, sensitive, and difficult issue. Parking matters to people," he said.


But then he went on to explain that voters and previous supervisors charged the SFMTA with managing the city’s entire transportation system — Muni, cars, bikes, cabs, pedestrians, and parking — in accordance with the city’s Transit-First policy, which calls for active promotion of alternatives to private automobile use in this dense and growing city.


Then he responded directly to Cohen’s challenge: "I would have to respectfully decline the suggestion that we don’t manage parking. We have an obligation under the Charter to do so."

Reiskin rejects the frequent accusation that SFMTA is anti-car — and the suggestion that the agency should focus on improving Muni before it can realistically expect people to rely less on private automobiles. The reality, he said, is that the city can’t make Muni or bicycling more attractive without regulating automobiles in general and parking in particular.


He said drivers who circle the blocks looking for parking spots constitute 20-30 percent of traffic in this highly congested city, and they are the worst sorts of drivers to have on the roads. They clog traffic by stopping frequently or double-parking, they drive in bike lanes, they do dangerous U-turns, and they are often inattentive and distracted, presenting a danger to pedestrians and cyclists.


The agency’s SF Park program tries to alleviate some of that problem by using market-based pricing at meters and garages to promote turnover in high-demand areas and to ensure the availability of parking spots. But in Potrero Hill and the few other parts of the city that still have unregulated street parking, other issues arise, such as out-of-town commuters parking for free all day and limiting availability in a region slated for lots of new development in the coming years.


"Parking management matters," Reiskin said, adding that without it, "we won’t be able to achieve our goals of having an efficient transit system."


He cited policies in the Eastern Neighborhoods Plan that the supervisors approved that call for parking management and noted growth projections that could draw another 100,000 people into San Francisco in the next 20 years.


"The competition we feel today in the public right-of-way will only grow more intense," Reiskin said.


Farrell argued that families and many individuals need cars to get around: "The use of a car is simply necessary." Reiskin acknowledged that cars are still the top transportation choice in San Francisco and they will remain so for the foreseeable future. But he said that each person who opts to use a bike, Muni, or to walk is an important gain in the efficiency of the overall transportation system, given how much space cars take up, so eliminating free parking is an important incentive.


"There is a clear relationship between transportation choices and costs," Reiskin said. "If there is free parking, a lot more people will choose to drive."


Farrell then repeated the other big criticism that gets aimed at the SFMTA over its parking management program, that it’s simply a "revenue grab" that uses meter and parking citation revenue to make Muni and cycling improvements. But Reiskin said the $200 million in revenues from parking have been fairly consistent, with increases in meter revenue being offset by declining revenue from citations (which he attributed to longer meter hours and new payment options) and lowering the rates in city parking garages to make them more competitive with street parking.


"We’re lowering your rates as much as we’re raising them," Reiskin said after noting that, "We’d much rather get the revenue through the meter than through citations."


Finally, Farrell got down to the crux of the criticism from car owners: why can’t everything else wait until the SFMTA makes Muni more efficient and attractive? This is a car-dominant culture, and people won’t take the bus until it’s easy and reliable. Bike advocates make a similar argument, saying completion of a safe system of bike lanes is the only way to substantially increase cycling in the city. But Reiskin said the SFMTA has to do everything at once lest traffic congestion slow the entire system.


Sup. David Campos said he understands the frustrations of his northeast Mission constituents and he thought the SFMTA was right to delay the implementation of parking management programs there (the revised plan comes out this summer). But he noted that many of his constituents can’t afford to own a car and they need SFMTA to actively promote other transportation options: "We do need to find a way to do everything and balance this out."

No neighborhood epitomizes the tricky balancing act on parking polices more than the northeast Mission, with its tight mix of residential and production, distribution, and repair businesses in a neighborhood where growing parking demand will be exacerbated by plans to convert the parking lot at 17th and Folsom streets into a park.


That was where the anger at the SFMTA’s approach to parking reached a fever pitch last year, spawning opposition groups such as the Northeast Mission Coalition. Angela Sinicropi, who heads that group, is calling for new preferential parking permits for local residents and the PDR businesses in the area.


"It’s not a preference or a choice. Vehicles are a necessary part of these businesses," said Sinicropi, who owns a photography business called Syntax Studio. "We need long-term, all-day parking."


She said her members appreciate SFMTA staff working with residents, but they’re still frustrated by the agency’s reliance on parking meters as the main parking management tool. Others simply slammed the SFMTA — which was set up as an independent agency that would be somewhat immune from political pressures — as out-of-control.


"The problem with the MTA is their lack of transparency and accountability," Rob Francis said.


"Keep things as they are and be respectful of taxpayers," said Walter Bass, a Potrero Hill property owner, blaming the "bike people" for skewing the agency’s priorities. "SFMTA has lost the privilege to manage parking in San Francisco."


Reiskin sat in the front row listening to angry tirades against him and his agency for more than an hour, yet he stuck by his position that managing parking is far from a privilege — it is a difficult duty and one he doesn’t intend to shirk, even as he tries to heed the public’s concerns.


In the end, the supervisors didn’t really chasten the SFMTA, as its critics had hoped for.


Farrell seemed content to declare, "There are no other plans to expand parking meters throughout San Francisco," after Reiskin said he’s not planning to go beyond the five parking management areas now being created.


"I hope MTA was listening to the public comments and concerns," Cohen offered, hoping the hearing will somehow alleviate the shitstorm from some of her car-driving constituents.


And Campos closed with perhaps the only real conclusion that could be drawn from this hearing: "This won’t be the last time we’ll be talking about this issue."