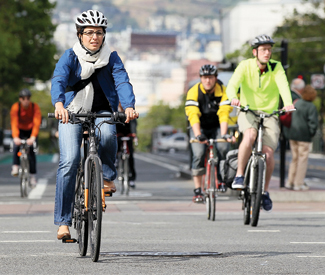 When a four-year-long court injunction against new bicycling improvement projects in San Francisco was finally lifted in 2010, there was great hope in the cycling community that the city would rapidly move forward on completing its long-planned network of bike lanes.

Feeding that optimism, Mayor Ed Lee, Board President David Chiu, and other top officials set ambitious goals to increase cycling, even though they did little to provide funding that was up to the task or overcome political opposition that inevitably arises to projects that take space from cars (see “20 percent by 2020,” 5/8/12).

San Francisco is still a long way from emerging into even double-digits in terms of the percentage of vehicle trips taken by bike, and a big part of that is many people don’t feel safe or comfortable fighting with cars for space on the roads. They want bike lanes throughout the city, ideally more of the physically separated cycletracks that debuted a few years ago on Market Street.

So, on Bike to Work Week 2013, we’re taking a look some of the cycling hot spots in the city, places where the San Francisco Bicycle Coalition and other advocates have been pushing for pivotal bike safety improvements, the opposition they’ve encountered, and the status on those improvements.

Polk Street: This has become the hottest of hot spots in recent weeks, with an SFMTA plan for cycletracks shot down by local residents and businesses who complained about the loss of parking spaces on this narrow and increasingly congested corridor. SFBC is organizing to restore the bike lanes, starting with a May 14 event at its office.

Masonic Boulevard: Cars turning left from Fell onto Masonic, which bisects the bike-friendly Panhandle, used to be one of the most dangerous spots in the city, a problem that was largely solved with a special bike-signal light. Next, the SFMTA is proposing to take a lane from cars on that fast-moving thoroughfare and install bikes lanes all the way to Geary, with important funding decisions on that project coming up this summer.

Fell and Oak Streets: There’s finally been some recent progress to this short but important east-west connection after years of delays and broken promises. Cycletracks on each busy street to connect the Wiggle to the Panhandle were approved in October, with an appeal denied the next month as Fell got new striping. But it was only in the last week that Oak finally got two blocks of temporary bike lanes, with parking spaces still standing in the way of the final block.

Second Street: After years of political haggling and community meetings, the SFMTA is finally on the verge of approving bicycle and pedestrian improvements on this dangerous car-clogged artery. The latest plans call for one-way cycletracks running next to the sidewalks on both sides of the street separated by a raised median with street trees separating riders from rows of parked and moving cars. Look for community meetings on the project in June.

Caesar Chavez Boulevard: This busy street got some much needed improvements earlier this year, with good bike lanes on the eastern portion, clearer signage for automobiles approaching the confusing maze as Chavez crosses I-280, and pedestrian safety improvements. Now the city just needs to continue what it started and complete the bike-lane link all the way to Valencia.

Market Street: Cyclist demand is causing mini Critical Masses everyday during the morning and evening commutes on mid-Market Street. Yet despite the fact that the last two mayors long ago called for private cars to be removed from this showplace thoroughfare, Market is a traffic mess and will probably remain so for awhile without fresh political will. The Better Market Street project has delayed improvements to 2017, and its planners this year offered the daffy idea of banning bikes from Market and forcing them over to Mission.

Mansell Street: Improving people’s ability to safely ride bikes to and through McLaren Park, the SFMTA has designed and approved a road diet along Mansell that includes a two-way cycletrack and pedestrian path from Brazil to University, after a series of multilingual community meetings.

Embarcadero: To help improve access to and views of the waterfront during this year’s America’s Cup, the SFBC is aggressively pushing for a pilot project with a two-way cycletrack along the bay side of the roadway. Meanwhile, the SFMTA is now doing a long-term transportation study that will inform approval of the Warriors Arena and the Giants/Anchor Stream development at Pier 48, which will hopefully fund the Blue-Greenway bike path along the waterfront.