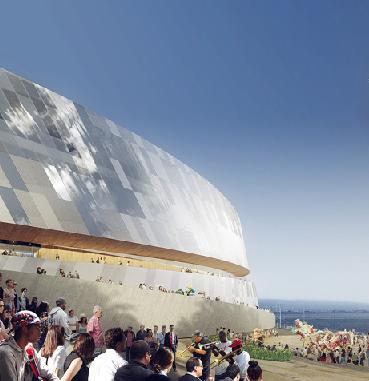 The Warriors and the all-star lineup of nearly every political consultant in town launched a new public relations offensive this week with the release of a new, spiffy set of drawings and a rewritten plan for a waterfront arena. And opponents of the project pretty much shrugged and said: So, what?

Sure, it looks nicer than it did before. Sure, there’s a pedestrian walkway around the arena. Yeah, there’s glass on the inside that will give spectators a nice view of the Bay. Oh, and there’s room for a cruise ship terminal, to give the whole thing a veneer of maritime use.

But the problems with this project have never been the architecture of the 12-story structure or the inevitably dubious links to the water. “The design was never the point,” Randy Shandobil, a spokesman for the Waterfront Alliance, told us. “Is this the best place to put a big arena?”

The new plan calls for a slightly smaller arena — 125 feet high instead of 135 — with slightly less retail space and seating inside. The glass sides will not only allow fans to look out, but allow people walking around the outside to view in and see something going on inside. The scoreboard will probably be visible; the actually play on the floor less so.

The visuals presented by the architects, Snøhetta and AECOM, indicate that the arena will perch on a large pad raised significantly above the level of the current Piers 30-32. From the ground level, the arena looks like a giant flying saucer, taller than AT&T Park, that’s plopped down below the Bay Bridge.

Craig Dykers, a representative of the architects, told a Board of Supervisors committee May 6 that the arena will fill a need for some sort of project along the open stretch of waterfront from the Ferry Building to AT&T Park. His presentation made it sound as if that undeveloped area was by nature a blight; thousands of joggers, walkers, bicyclists and people enjoying the unimpeded views of the Bay might disagree.

In fact, the project will change more than the two piers; it will create a busy residential and commercial shopping district that will increase foot and vehicle traffic even when there are no games or concerts scheduled.

This is, by any standard, a very different project from what the Warriors first proposed back in November, 2012. That’s why the Waterfront Alliance is asking that the scoping sessions for the environmental impact report on the project ought to go back to square one.

No matter what you think about the design, or the views, or the impact on the city’s priceless waterfront, there’s a problem that’s glaringly obvious, and Sup. Scott Wiener made the point very clearly:

This absolutely has to be a transit-first arena. There’s no way that part of the city can handle even half of the 5,000 cars that have been counted at the Warrior’s current home, Oracle Arena in Oakland. And much of that impact is going to fall on the subway, or light-rail vehicle system.

“It absolutely has to have good LRV service,” Wiener said.

The problem: “Our current system is not even meeting our current needs. I have a lot of constituents who say, when there’s a Giants game you just don’t take the subway because there’s not going to be any capacity. We’re close to a breaking point now, even past it. and our ten-year capital plan puts to the side most of Muni’s unmet capital needs.”

Jennifer Matz, the Mayor’s Office point person on waterfront development, said she agreed with Wiener. “I recognize this challenge,” she said. “There needs to be more of a holistic approach.”

But Wiener wasn’t backing down. Adding the capacity that will be needed to serve the new arena, and the new Giants development, and the new residents moving into the waterfront neighborhood, is not going to be cheap. “Where,” he asked, “is the money going to come from?”

Peter Albert, who works for the Municipal Transportation Agency, is looking into the number of passengers that will be riding Muni — and BART, and Caltrain — and the capacity those systems plan to add. But he had no answer to Wiener’s question.

That’s because there is only one answer: The taxpayers will have to come up with something in the range of a billion dollars to solve Muni’s capacity problems in the next few years — or else the developers will. And right now, there’s not a lot of political will at City Hall to ask for either.