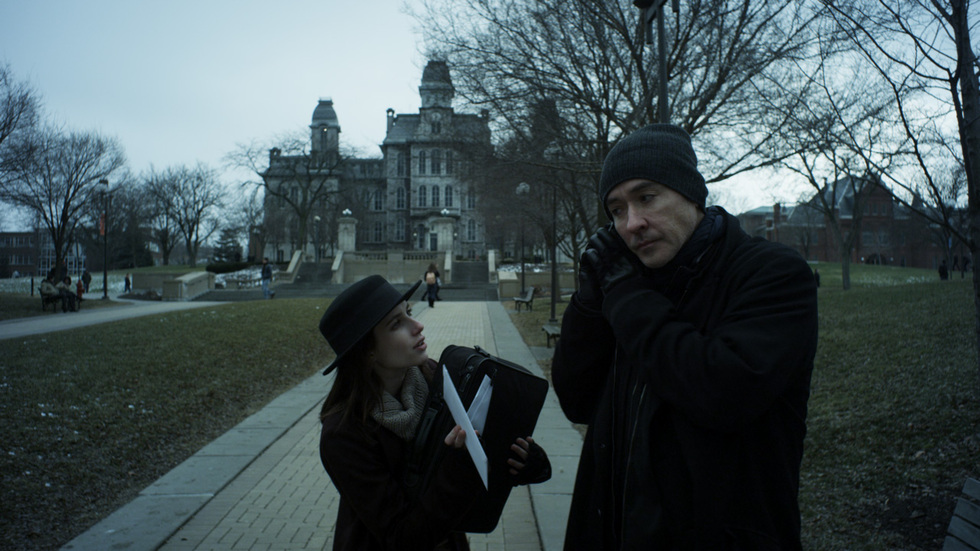 It was the best of sequesters: oh, Tribeca, how to wrap up the many, many days spent hidden away in the dark, watching flickering images dart across a screen? I can only try, as I speed through the best of the rest — and the notable not-so-muchs.

Kids these days: Poets and the young girls that love them are at the very funny heart of indie comedy Adult World, which is sure to make a star of Emma Roberts. She’s the shrill, just-graduated, wannabe-verse-slinger Amy, who’s moonlighting in an adult video store alongside hollow-eyed cutie Alex (American Horror Story’s Evan Peters) and hoping scuzzball genius will rub off if she “interns” (read: cleans house) for her favorite poet, Rat Billings (writ world-weary and hilariously cynical by John Cusack). First-time feature director Scott Coffrey (also, weirdly, a graduate of the same Honolulu high school where I did my own Amy impression) lets a few rough edges (i.e., edits) show, but it’s all good when the filmmaker winds up Roberts, playing the cringe-worthy Tracy Flick for the chapbook set, and lets her go.

Just as funny — and very of-the-moment — is G.B.F., as in gay best friend. As in every Bravo-watching gal’s latest, greatest slice of arm candy. Tanner (Michael J. Willett of United States of Tara) is just your average, comic-book-reading closeted gay teen when bestie Brent (Paul Iacono) decides his path to social success will be established once he comes out as the first openly gay teenager at their high school. He’s sure to become the pet pick of the would-be prom queens: the girl-with-the-best-hair Fawcett (Sasha Pieterse of Pretty Little Liars), drama mama Caprice (Xosha Roquemore), and Mormon good girl ‘Shley (Andrea Bowen). Alas, the wholly unprepared Tanner gets outed first — and the battle for the O.G. G.B.F. ensues.

Working with a fast, sassy, and slangy script — and teen comedy vets Natasha Lyonne, Rebecca Gayheart, and Jonathan Silverman — director Darren Stein (1999’s Jawbreaker) has already traversed some of this uber-camp territory: yes, there’s a multiplayer saunter down a high school hall and a maj makeover montage. But the snappy, laugh-out-loud dialogue by first-time screenwriter George Northy (fresh from the Outfest Screenwriting Lab, as he discussed after the film in a Q&A with Stein and much of the cast), along with some high-speed-DSL improvising by the cast, made this one of the more effortlessly enjoyable — and commercial — movies at Tribeca.

Speaking of effortlessly commercial, I mean, adorable: It sounds like NYC went stir-cray for Lil Bub and Friendz, especially when the lil’ permakitten herself materialized for a free open-air screening of the Vice documentary on a Saturday night. Short (at about 60 minutes), sweet, and definitely crammed with more than you’d ever wanted to know about Internet cats (even after Bravo’s LOLwork), their owners, and their merchandising, Lil Bub fortunately keeps its eye firmly trained on the prize, namely the wide-eyed little mutant in the center of a viral firestorm, while framing visits with Nyan Cat, Grumpy Cat, and Keyboard Cat with Bub’s life story.

This runt o’ the litter may not appear to have any bone marrow in her leg bones, zero teeth, a permanently extended tongue, and extra toes on every paw, yet she’s won more than just owner Mike Bridavsky’s heart — she’s repping for all the totes-adorbs misfits out there, making their fortunes just by being themselves (or by creating a grabby persona) on the Interwebs. Now we just need a 24-hour Bub-cam to fill in the gaps of our Bub-Friends-Forever obsession.

Lighter fare? Paul Verhoeven’s crowd-sourced sex comedy Tricked was a mildly diverting exercise in group think, or better, gang-grope creativity. It’s no The Fourth Man (1983), Starship Troopers (1997), or even Showgirls (1995). There’s only a dash of that eye-tinglingly perverse psycho-drama that Verhoeven specializes in is evident in, perhaps, that tampon spinning in the toilet or this luscious ingenue suddenly flashing her ta-tas.

On the perversity tip — it doesn’t get much more against the grain than cannibalism, Maori family style, in the Kiwi cult-circuit-primed OTT Fresh Meat, which wallows then practically whirls in its own trough of bad taste. When a group of shoot-’em-up screw-ups invade the suburban home of an upstanding Maori suburban family, they learn that their freezer’s contents are less than savory — the hard and gory way — in a tone that seems derived from ‘80s Hong Kong martial arts comedies. Still, you have to appreciate the salacious brio with which director Danny Mulheron tackles this homecoming to Z-grade yuck-fests.

Keeping it real: Ground-level neorealistic storytelling made its stand in features about everyday, blue-collar folks just trying to keep their head above the … snow. The best of which was Whitewash, a journey into the heart of a murder mystery with Thomas Haden Church cast as a snow-plow driver forced to rough it in the snow-swathed woods of Quebec. Church ably navigates that thin line between a kind of natural, deadpan humor and serious, even deadly, drama.

Kitted out with a cast that includes John Slattery (Mad Men), Adam Driver (Girls), and Margo Martindale (who’s in everything), Bluebird checks in on a similar, northerly terrain, an isolated, snow-cloaked Maine logging town, on the pretext of investigating the dire ramifications of single lapse by a well-meaning school bus driver (Amy Morton of Boss). Frustrated by that traumatized character’s deer-in-the-headlights muteness, you know there’s nowhere to go but up.

Much better, down south in burn-out, strip-mauled Florida, is Sunlight Jr. — otherwise known as Walking Dead heartthrob Norman Reedus’s return to the big screen, as yet another scary redneck, this time wielding a big-wheeled truck rather than a crossbow. Serenaded by an elegant guitar soundtrack by Dinosaur Jr.’s J. Mascis, Naomi Watts is as fantastic as usual, as a convenience-store honey struggling to stay sober and maintain a relationship with a hard-drinking, wheelchair-bound boyfriend (Matt Dillon). Director and writer Laurie Collyer (Sherrybaby) keeps her focus tight, only adding to Sunlight Jr.’s power.

Meanwhile, earnest Iowa farm-centered At Any Price, which opens theatrically in the Bay Area tomorrow, wasn’t quite the breakout movie for a mugging, dead-eyed Dennis Quaid, but it might be for Zac Efron, who rises above the fray in an indie that aspires to the gravitas of A Thousand Acres.

A continent and millions of concerns away in Italy, Ali Blue Eyes made a case for the story of two rebellious teenaged pals — one an Egyptian Muslim, the other a Catholic Italian. Nader (Nader Sarhan) may wear blue contacts in order to, rather lamely, blend in, but his loyalties and cultural ties are tested after a Romanian kid is stabbed in this compelling glimpse into an immigrants world at the edges of affluent Milan.

Shock and awe: Midnight movies abounded — two of the best that I caught were The Machine, a relatively polished, low-budg Frankenstein story set in an English weapons research lab where researchers are intent on building the ultimate cybernetic super soldier. Riddling his script to references to quantum computers and the like, director-writer Caradog James manages to infuse a solid sense of Cronenbergian dread — as well as a tenuous moral ambiguity — into a sci-fi narrative that’s as old as the Romantics.

Much more disappointing — and marred by technical roughness — was Dark Touch, Marina de Van’s (2002’s In My Skin) rendition of Carrie, this time in the form of a telekinetically gifted (or cursed) 11-year-old. I get it — child abuse leads kids to act out, in this case, in murderous ways — I just kept tripping over the lapses in continuity and logic, the beautiful female characters’ uniform Breck Girl look, and the tragic special effects.

Fun, in the way that a blood-sucking brotherhood brandishing the “pointed nails of justice” can only be fun, is Byzantium, Neil Jordan’s return to the world of the undead, so long after 1994’s Interview With a Vampire. Here, the would-be malignant spirits choose to their path by visiting a wicked island that gushes blood when another little vampire is born. They also stroll about conveniently by day — though the isle and its keepers forbid women to make vampires (childbirth, I suppose, is considered sufficient). Still, it’s a trashy good time, with a lush Gemma Arterton wildly vamping as harlot-prey-turned-madam-predator and taking a garrote to her hunter (though after sitting through The Host, I’m not sure how much longer I’m willing to buy Saoirse Ronan’s ethereal space-cadet act).

The final, very wonderful monster in the room? A certain pantless Broadway legend who has shared a stage with Harpo Marx, dated Jack Kennedy, and has had Noel Coward and Stephen Sondheim write for her. The doc Elaine Stritch: Shoot Me follows the feisty song-and-dance Broadway icon on the verge of 87 as she tosses off wisecracks, appears on 30 Rock as the mother of Alec Baldwin’s Jack Donaghy, copes with diabetes, and bosses around documentary maker Chiemi Karasawa. It’s a unique delight — much like its subject. Yes, she just moved out of her digs in the Carlyle Hotel and back to her native Michigan — but Shoot Me allows us to bask in the considerable afterglow left in her wake.