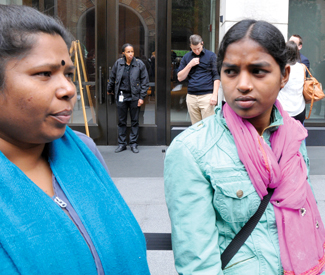 Their objective is to set up a kind of direct democracy system for hashing out the city’s discretionary spending. The proposal would create a charter amendment and a new Oakland city department to reconfigure the politically contentious budget allocation process, by “shifting accountability in a way that more people are able to engage,” says organizer Sonya Rifkin.

The proposal envisions convening democratic “neighborhood assemblies,” each of which would represent roughly 4,000 Oaklanders. Any resident age 16 or older would be free to attend meetings and vote on NA proposals. The NA proposals would then be forwarded onto citywide committees and synthesized as proposals for the ballot, whereupon the electorate would have the final say.

For the Community Democracy Project organizers, who mostly became acquainted through Occupy Oakland, the radical concept is just as much about achieving equitable budget allocation as it is about stoking the embers of community building. To place it on Oakland’s city ballot, the ambitious campaigners hope to collect 40,000 signatures in the next six months.

It’s a tall order, yet the activists appear undaunted. It’s a movement, McDougal says, comprised of “regular people, realizing that they don’t have to be spectators. They can be participants.” (Rebecca Bowe)

Last November, a fire broke out in the Tarzeen Fashions factory in Bangladesh, killing 112 employees who produced garments for Walmart and other retailers. Sumi Abedin, a 24-year-old garment worker who earned about $62 a month working 11-hour days, six days a week, survived the blaze.

Through a translator, Abedin told reporters, “We were trying to exit through the staircase, and then we saw a lot of burned bodies, injured bodies. And I jumped through a third floor window because I thought, instead of being burned alive, even if I die, my mother will get my body.”

Abedin was standing outside San Francisco’s Gap headquarters, flanked by Bay Area activists from Jobs with Justice, Unite HERE, Our Walmart, and others. They were there to call on the popular retailer to sign a fire-safety agreement to implement renovations, at an estimated cost of about 10 cents per garment. In a statement, Gap noted that it had implemented its own four-point plan “to improve fire safety at the selected factories that produce our products.”

Gap had no direct connection with the Tarzeen Fashions blaze that Abedin narrowly escaped. Yet Bangladesh Center for Worker Solidarity organizer Kalpona Akter explained that the campaign was targeting Gap because “they’re saying they have corporate social responsibility,” yet have refused to sign onto the worker-sanctioned, legally binding fire safety agreement endorsed by BCWS, which brands such as Tommy Hilfiger and German retailer Tchibo have committed to. “This is one appropriate thing Gap can do in this moment,” Akter said, “if they really wanted to prevent this death toll in other parts of the world.” (Bowe)

The phrase “welfare” may conjure up the image of a couch potato catching up on daytime soaps while the checks roll in, but Karl Kramer of the San Francisco Living Wage Coalition says it’s simply not the case — some people are not only working to earn those meager checks, they’re faced with few options once their participation in such programs comes to an end.

In San Francisco, many recipients of public assistance are part of the local Community Jobs Program, designed to provide unemployed people with on-the-job experience to help them land on their feet after six months. In practice, however, “it’s not happening,” Kramer says. “They’re dead-end programs. People aren’t moving onto jobs, and at the end of the Community Jobs program, they’re cut off completely.”

Part of the problem is that few pathways exist to connect the workers with actual paid gigs once they’ve finished. So the Living Wage Coalition is pushing for legislation that would improve and expand upon the Community Jobs Program, by raising the wage rate from $11.03 to $12.43 per hour, giving participants the option of working 40 hours a week, extending the program from six months to one year to square with eligibility requirements for many job listings, and creating an advisory committee to facilitate entry-level job creation in city departments.

“There has not been political will to really make these programs successful,” Kramer notes. And in the meantime, “people don’t connect it with why there’s such a growth of homeless families” in San Francisco. (Bowe)

The California Domestic Workers Bill of Rights would apply basic federal labor protections (such as a minimum wage, the right to breaks, and basic workplace safety standards) to domestic workers. If it becomes law, credit will go in part to its author, Assemblymember Tom Ammiano, but also to the California Domestic Workers Coalition, which has been pushing the issue for years.

Supporters of the bill say it’s unconscionable that domestic workers — the people who care for our children and grandparents and tend our homes — are one of just two occupations exempt from the Fair Labor Standards Act of 1938, the other being farm workers (another profession with a well-documented history of labor abuses, and also one comprised largely of unpaid immigrants). “We need to have protections for the people who do really important work,” Katie Joaquin, campaign coordinator for the coalition, told the Guardian.

As we reported recently (“Do We Care?,” 3/26/13), Gov. Jerry Brown vetoed the measure last year after it was overwhelmingly approved by the Legislature, expressing the paternalistic concern that it may reduce wages or hours of domestic workers. But its supporters have come back stronger than ever this year. Now know as Assembly Bill 241, the measure cleared the Assembly Labor Committee on a 5-2 vote on April 24 and it now awaits action by the Assembly Appropriations Committee. They say this bill, which New York approved in 2010, is a key step toward valuing caregiving and other undervalued work traditionally performed by women. (Steven T. Jones)