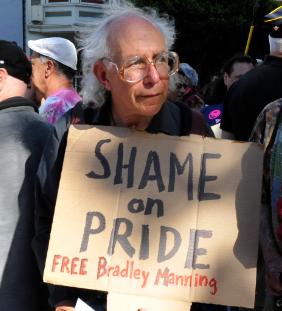 Lots of people angry about the Pride Committee’s decision to fire Bradley Manning as a grand marshal. But the most savage, all-out assault comes from Steven W. Thrasher, a former Village Voice writer who has nothing good to say at all about Pride or the people who run it — or for the more mainstream parts of the LGBT movement:

Listen up, fellow homos—you have been bought, paid-for and sold to the highest bidder. The military industrial complex is so far up the ass of the LGBT movement that it can feel what is being digested in its upper intestines. Talking points and “messaging,” not discussion and debate, are the preferred methods of “communication” in a movement now run and owned by PR-firm trained Professional Homosexuals. Dissent will not be tolerated, and the assimilation of homosexuals into the rest of the militarized American public is complete.

On Manning and Pride:

I had to smile when I came to the end of the post, which notes:

Steven W. Thrasher was named Journalist of the Year 2012 by the National Lesbian and Gay Journalists Association for his staff writing for the Village Voice and his freelance contributions to the New York Times and Out magazine. Two weeks after receiving this award, he was laid off by the Voice.

Is he being too harsh? Is he channeling his inner Marc Salomon? Or does the guy have a point here?