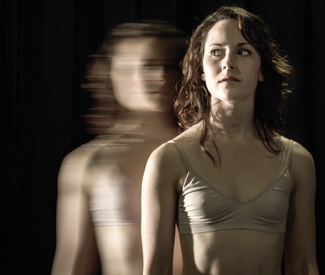 Falling asks questions that resonate beyond the physicality of what Slender has said he wanted to look at: the human need to stay upright and the reality of falling. That’s what the dancers do. They walk, stand, wobble, turn, and they fall — like rocks, sponges, and leaves. And then they get up. Again, and again, and again.

Repetition and unisons are the work’s most effective strategy. At first they are also annoying. A dancer bourrées across the stage like some Swan Queen, another joins her, then another. One starts an in-place stepping pattern, companions pick it up. A daisy-chain run calls up responses.

After a very short time this domino effect defocuses attention the way a déjà vu does. It also threatens to paralyze Falling’s thrust. But Slender keeps it going, and the set-up becomes uncomfortable because the process seems unstoppable. Then he shifts gears, with Shannon Leypoldt at the head of a diagonal shooting up her arm into the air as if delivering a manifesto.

That single gesture, besides elongating the body, becomes perhaps a leader’s command, an invitation, or a greeting among equals. It will be repeated over and over again, and everyone responds to it. To watch this process recalls cults and causes, rigid beliefs, and military indoctrination. In Falling, it’s insidious because not force but seduction sends those arms into the air. The initiation is made gently with a close body-to-body encounter as if in a tango. Tender hands help you take off that monkish, hooded robe to reveal the pretty dress, just like everyone else’s, underneath. Subjugation becomes possible because you really want to belong, no matter how hesitantly your arm responds.

There is a cool sense of inevitability about the way Leypoldt accrues these acolytes, until only Catherine Newman is left as the outsider. Desperately trying to hang on to her gown, and yet trying to step into the existing unisons, she attacks one of the dancers but crumples. That’s when hands reach out and welcome Newman to the brave new world accompanied by Dan Cantrell’s “angelic” voices. However, in that section, with its quasi-militaristic, though bare-foot stepping pattern, Falling stepped rather too close to literalism.

When Newman becomes the last acolyte and Leypoldt goes into a tailspin, Falling’s emotional temperature rises to something like a fever pitch. For the most part Slender keeps overt expressiveness in the cooler. The choreography stresses clarity and unity of purpose; there is little room for individual phrasing. Some of the floor patterns look as if they were designed on graph paper. Even when the dancers squirm flat on their backs and look like beasts about to expire, Darl Andrew Packard throws a harsh light on body parts as if they were on a dissecting table. Even in pretty phrases, elegantly rendered, the women look impersonal, primarily engaged in tasks — not in communicating. The dancing exists within strict parameters, yet not oppressively beyond the implications of the thematic material. The finale could have become melodramatic, but it didn’t; the dancers just walked away, leaving us with more questions than answers.

Falling benefits greatly from excellent production values. Packard suspended dozens of reflectors across the stage that blink on and off, suggesting a vast but dark space. Together with Slender he designed a simple set of dark woods in the beginning that became something like a world aflame at the end. Cantrell’s score, often fractured, is first-rate. Often you sense that the music, or its absence, serves as a comment to what’s happening in front of our eyes. Miyuki Bierlein designed two outstanding costumes, one a dark body-hiding robe, the other a subtly colorful summer frock that enhanced turns and suggested common ease. In addition to Leypoldt and Newman, the praiseworthy performers included Liane Burns, Michaela Burns, LizAnne Roman, and Amanda Whitehead.