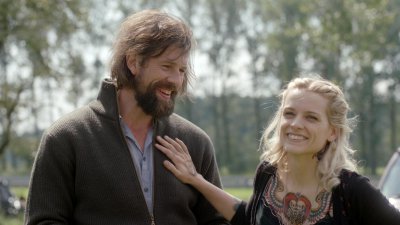 The only-in-Noo Yawk perks of the Tribeca Film Festival? The proximity of theaters like AMC Loews Village 7 to repositories of ramen deliciousity like Momofuku Noodle Bar, a scant two blocks away. You can keep the free ketchup-flavored popcorn distributed by sponsors in front of other theaters. I’ll take Momofuku’s house ramen, which overwhelms with porky goodness (a.k.a. pork belly, pork shoulder) and comes with a soft poached egg and gotta-have-it fish cake, cabbage, and nori.

Momofuku’s mini mason jar of flavorful kimchi also makes an ideal spicy side to such Tribeca talkies as The Broken Circle Breakdown, Big Joy: The Adventures of James Broughton, and Flex Is Kings.

The grass is blue out in Belgian farm country in the completely recognizable albeit lovable The Broken Circle Breakdown. Imagine the sad-eyed, death-fixated songs of Appalachia with a tattooed rocker twist and European political bent (we’re talking socialized-med lefty rather than Bush-booster Hank Williams Jr.). Director Felix Van Groeningen gives his familiar love story a slight twirl through a nonlinear time-and-space mixing machine, and we pick it up as country-music-playing sweethearts Elise (Veerle Baetens) and Didier (Johan Heldenbergh) are anxiously watching over daughter Maybelle (Nell Cattrysse), hospitalized with leukemia.

Little is made of the disjunctions and commonalities between bucolic Belgium and backwoods America, though Van Groeningen dutifully charts the lovers’ highs (their sexual chemistry and affinity for high and lonesome music) and lows (the fights and personality conflicts in the form of Elise’s creative impulsiveness vs. Didier’s anger management issues) with affection and small moments of grace — much of which is brought to the screen by Baetens, who pulls her tattooed vintage girl beyond the cliche with the passionate intensity of a rock ‘n’ roll Noomi Rapace.

Serving up an inspired, wonderful, flawed glimpse of the inspired, wonderful, and sadly, happily flawed James Broughton and his multigenerational ride through Bay Area bohemia, Big Joy: The Adventures of James Broughton got its suitable Tribeca send-off with an afterparty hosted by radical-fairy-identified documentary-makers Stephen Silha and Eric Slade (spurred to make the movie with the remaindering of the poet’s many books) and a clutch of Broughton’s beloved Sisters of Perpetual Indulgence.

In the process of documenting the polymorphously creative life and times of the Modesto-born, Bay Area-nurtured poet, filmmaker, activist, teacher, dancer, and Pauline Kael baby daddy, the directors gather invaluable footage — including clips from Broughton’s pivotal experimental films, like The Potted Psalm and The Bed; frank interviews with ex-wife Suzanna Hart and son Orion, and footage of the man’s death-bed send-off — as well as talking-head snippets capturing Broughton friends and colleagues such as George Kuchar, Anna Halprin, Armistead Maupin, and Broughton’s onetime San Francisco Art Institute student and great love Joel Singer. I confess: the ‘80s-merry, multicolored-swiggle aesthetic of the film’s titles and animations isn’t quite my cuppa — but who can resist Broughton himself, the movie’s ineffable, mutable, magical center?

Also irresistible, and just as immersed in pure-product-of-American-going-wild subculture, is Flex Is Kings, a snapshot of the so-called extreme street-dancing scene of East Brooklyn. Documentarians Michael Beach Nichols and Deidre Schoo take aim at Flex crew, a group of practitioners in this tough-to-define art — though I’ll try. The miraculously fluid, double-jointed hybrid of breakdancing, moonwalking, popping and locking, vogueing, and super-slo-mo anime-cum-zombie-martial-arts-video-game action plays off the violence of both comic books and street corners, valuing molten flow over crisp, sharp moves, weird new sights over tried-and-true repertoire.

We follow Flizzo, the stocky, eyelinered OG with an infant daughter on the way, who prides himself on his creativity (and predilection for gimmicky moves straight out of a magician’s bag of tricks) but can’t quite imagine his way out of petty fights with his girlfriend. And then there’s Jay Donn, the scrawnily handsome dancer who embraces spectacle, can take an artful spill off the roof of a building onto the walkway below, and manages to skillfully stumble his way into a legit dance company’s production of Pinocchio.

It’s a shame that Nichols and Schoo didn’t trust these dancers’ routines to hold the attention of viewers: they insist on cutting away and mashing moments up into sliced-and-diced montages. But such issues seem like quibbles when you picture these performers otherwise lost to history — and then sees their fellow dancers perfecting their moves on the subway. So savor it.