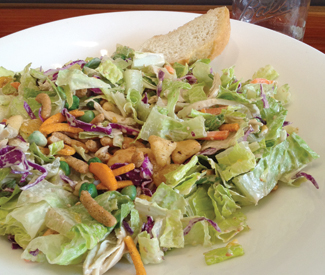 THE BLOB Good green goddess, we’re only midway through the season but your Blob is getting asparagused out! This year, that delectable spring stalk seems especially abundant on menus about the Bay, from the warming canh cua mang tay (crab and asparagus soup) at PPQ Dungeness Island (www.ppqcrab.com) in the Outer Richmond to the verdant asparagus ice cream served at a Blob friend’s garden party. Along the way: zingy asparagus lemon pizzetta with prosciutto at Per Diem (www.perdiem.com) in the FiDi, using Zuckerman Farm in Stockton’s trademark purple variety, and the snap of a Shattuck tempura roll with battered yam at Mission vegan Japanese go-to Cha-Ya (762 Valencia, SF).

The following treats are deliberately void of nubby spears — you can asparaguess why. Yet they’re pretty veg-tacular all the same.

WOLFGANG SALAD AT MARKET AND RYE

As the Blob was rolling through the diner-riffic wonderland that is West Portal — seriously, the bottomless coffee per square footage of this neighborhood is out of countrol — she remembered a sustainable, construct-your-own salad green spot had sprung up among the laden hash brown platters: Market and Rye. (There’s also one on Potrero Hill.) With choices like strawberries, flax seeds, crispy onions, and, yes, roasted asparagus, it was a lunch lock. It was also lunch rush, and the supercute staff seemed a might stretched to put together everyone’s picky orders, so the Blob chose a signature Wolfgang salad ($10.50) instead. It’s a twist on your old school Asian chicken salad, loaded with roasted chicken, red cabbage, carrots,

The dressing was just a might too creamy-thick for the Blob’s taste. But if there’s one thing

she loves, it’s a twisted Asian chicken salad. So she sat right down at the rustic space’s communal table with her Mason jar of strawberry water — and Wolfganged that ish right down. You can also order yummy premade salads like spring pea with lemon dressing or broccolini Waldorf by the scoop, like ice cream, which is neat.

The Orbit Room is such a special splice of atmospheric Europe cafe into artisanal SF cocktailia that the Blob hates to risk ruining it by overpromotion. Its spring drink menu is stunning ($10 each — add egg white for two more dollars, cluck cluck). The Blob stopped in with tasty amiga the Tablehopper (www.tablehopper.com), who recounted her scandalous Coachella exploits while enthusing over a Koriander — practically a salad in a glass, with leafy cilantro, tequila, ginger syrup, lime, and celery bitters. A Spring Shrub shapes a traditional American shrub (a colonial-era cocktail using sweetened vinegar syrup) with strawberry balsamic and black peppercorn base, vodka, lemon, a splash of rosé, and mint seltzer.

But the delicious Hayes Valley Farm coated the Blob’s gullet. It’s a classic bee’s knees cocktail, popular during Prohibition, with honey from the farm down the street, gin, lemon, celery juice, and rose water — all romantically garnished with dried rose petals. Sweet, but also bittersweet: sweet because the Hayes Valley farm honey came back after a massive bee die-off in 2010, bitter(ish) because the farm itself will be demolished next month for pricey condos. (The stalwart farmers claim to be OK with this, appreciating the brief time they had.) In 50 years, will people believe there was once a thriving farm there, not in 1813 but in 2013?

If you’re going to name something “the feast of all feasts” and price it at $30 per person, you know the Blob’s gonna check it out — even if it’s at a mall (in this case under the dome, thus “cupola,” at the Westfield Center). And yes, even though it does that awful phony four percent HealthySF surcharge thing, which the Blob didn’t know until she got the bill. Up to that point, she would have recommended it profligately.

Strap yourself in for eight or so random courses from handsome Lark Creek offshoot Cupola’s impressive Italian menu, decided by the kitchen. (A complementary “Festa Di Bacchus” wine journey can be had for $17.) As in: two-plus hours of well-portioned food — no flighty tasting menu flim-flam here, these are actual dishes. As in: the Blob and her companion Pinky received two whole Neapolitan pizzas (margherita and spice sopressata), a gloriously delicate handkerchief pasta with simple red sauce, a butter lettuce and gorgonzola salad, another salad of chopped veggies and wine-marinated croutons, an al dente squash and (sorry) asparagus dish, and frothy strawberry tiramisu. The highlight? A somehow feather-light artichoke lasagna — they do pasta soft here — accompanied by an arugula-cashew salad. Finally, the Blob was stuffed!