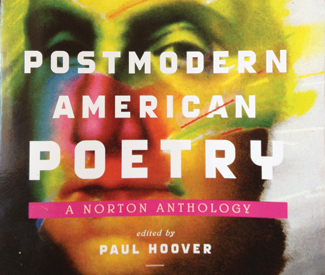 Big doo! I got fire inside

In 2000, Gary Sullivan’s grandfather fell victim to a then-familiar poetry.com scam. (“You’ve won a poetry contest! Order the book with your poem in it now!”) In revenge, he went on the scam site and wrote what he thought was the worst, most offensive poem ever — which of course won its own scam contest. Then a curious thing happened:

“When Sullivan sent his poem to friends online, they decided to write their own purposely bad poems,” editor Paul Hoover tells the tale in the introduction to his updated Norton Anthology of Postmodern American Poetry, released last month. Soon a whole listserv of sniggering poets were randomly Googling phrases from bad poems (this was when Google was brand new, mind you) and “plugging in” the random juxtapositions to create new, worse ones — which incidentally also captured the logorrheic splooge, misfired proto-snark, corrosive cuteness, pornographic troll-holes, and manic self-hype of the Internet itself.

A lot has changed since the first edition of NAPAP came out, in 1994. Back then, hyperacademic multicultural poetics and practitioners of the Language school, which sought to “scatter attention” over the poem with discursive overload and deliberate (yet often hilarious) difficulty, were riding high. In the color-saturated days before the Internet, the first edition was a revelation. Hoover, a San Francisco-based poet and teacher with a knack for highlighting the emotional resonance in abstract practices, served as a perfect guide to postmodern poetry, or at least a certain exciting type, which he broadly defines as “an experimental approach to composition, as well as a worldview that sets itself apart from mainstream culture and the sentimentality and self-expressiveness of its life in writing.” In other words: “truth” is out, truthiness in. And enough weeping over your dead great-grandmother’s recipe book, already.

I met with the tall, calm Hoover in his frighteningly humble San Francisco State office, where he’d been “locked up for months” working on the second edition (see my full interview this week at www.sfbg.com/pixel_vision). “We called the anthology ‘post-modern’ rather than ‘experimental’ or ‘avant-garde’ mostly because those terms are problematic, and have enough cultural baggage to really turn people off. So we started with the poet Charles Olson, who was the first poet to label himself postmodern and attempt to break with the grand modernist past. ‘And had we not ourselves (I mean postmodern man) better just leave such things behind us — and not so much trash of discourse, & gods?’ he wrote to fellow poet Robert Creeley. And he put this into practice in his ‘Maximus’ poems.”

The anthology is chronological: after Olson, in almost 1000 pages, we get almost all the big avant-garde-y names like John Cage, Robert Duncan, Denise Levertov, Frank O’Hara, John Ashbery, Jack Spicer, Allen Ginsberg … Uncontroversially, Hoover takes his lodestars to be the Black Mountain School, the New York School, and (somewhat shakily to me, in terms of intellectual rigor, yet still charming) the Beats. Then come the Language poets, near where the first volume ended, and afterward a multitude of newbies — Vanessa Place, G.C. Waldrep, Noelle Kocot, Ben Lerner — begin.

“In order for this book to not be 13,000 pages, I had to make some hard decisions, about who was not to be included, and who needed to go. It wasn’t so much a matter of redefining what is ‘post-modern’ or even what’s ‘American,’ although maybe those things have also changed. But so much has happened — the Internet, social media, September 11, the expansion of global capitalism, mass media, and multinational corporations. I don’t think there’s been such a fundamental change that we’ve moved out of this thing called ‘postmodernism’ into something completely different or new. But poetry reflects these changes with constant innovations of its own. There’s a lyricism completely of the time in the best of these poems, but also completely outside of it.”

So what are some of the innovations? Besides the hyperreal grotesqueness of Flarf poets like Sullivan, Sharon Mesmer, and K. Silem Mohammed, there is its nemesis — at least in a poetry beef possibly ginned up for attention — Conceptualism. Whereas Flarf adrenalizes visceral response within a poem’s span, conceptualism often makes the poem into nothing but the static result of grand idea: the best example of this is Kenneth Goldsmith’s epic “Day,” in which he reconstructed the entire September 1, 2000 issue of the New York Times into a 900-page book (excerpted in the anthology).

In between lie practices like Proceduralism (Christian Bök’s strangely affecting “Vowels” made out of words that contain the same letters as the title, and which ends “wolves evolve”), Google sculpting and cybernetics (Muhammed’s hilarious “Sonnagrams,” in which he puts Shakespeare’s sonnets through an online anagram generator, then “sculpts” the results in Microsoft Word, dragging the words around to form a new sonnet). There is also the deliberately “girly” “Gurlesque” poetry of Catherine Wagner, and the eerie and complex “ambient” poetics of Tan Lin, which is just a beautiful drift of words across a page, a “gossip of the mind.” And much, much more in this fascinating and necessary volume.

Funny, infuriating, dangerously familiar, hauntingly strange, way too intellectual, true despite itself: poetry is the same as it ever was. The next edition, in 2034, ought to be a real corker.