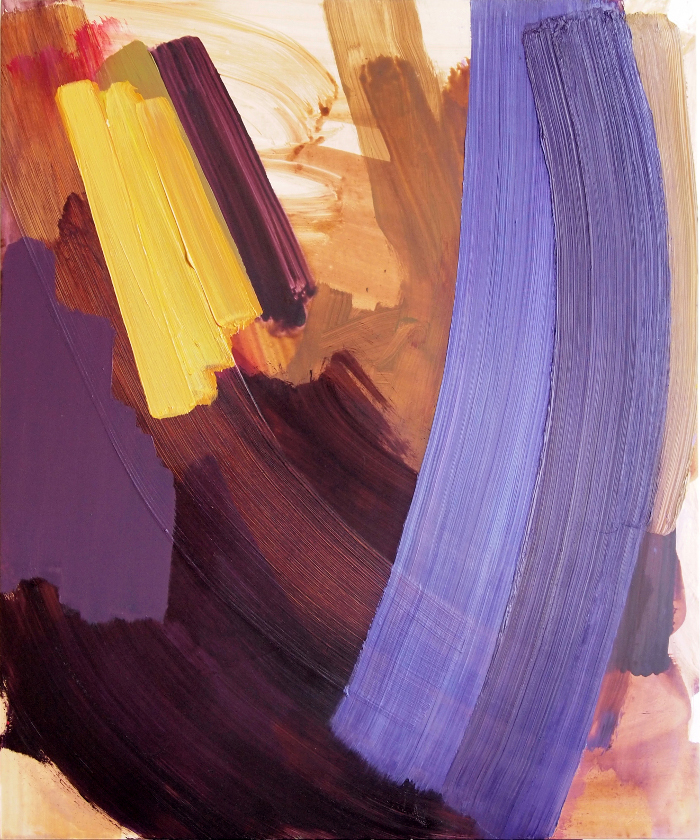 So it’s a bit of a switch to see his suite of six new, small paintings made specifically for George Lawson’s pocket-size Tenderloin gallery. Each of the works in “Recent Paintings” is titled by a prepositional phrase that sets out various ways to begin a journey, and the titles down by the stream, past the gate, out the door, and so on refer as much to Millei trying out responses to the size of the space as framing an interpretation for the images. Whatever it is, the architectural constraint is very good for the work — these are some of Millei’s most offhand and unguarded paintings, and colors press and slide against each other with something approaching intimacy. In most of the suite, marks become indistinct from color fields presented in slim, tightly compressed layers, held together by off-balance, looping gestures.

You can’t help but think that these were lots of fun to paint.

In conversation, Millei remarked on how these new paintings were informed by a long-running dialogue with area painter Mel Davis, who coincidentally has a show, “Start Here,” up now at Eleanor Harwood Gallery. It’s probably a stretch to draw too thick a line between the two bodies of work, but knowing about the interplay between them does tease out a sort of common concern.

Davis’ work, semi-abstracted, and knowingly winking at Matisse and Gauguin — especially the way that those two painters in particular have been filtered and lensed over the last hundred years by weekend painters and amateurs — presents a slowly unfolding narrative about the difference between loving painting and trying to love painting. There’s something both subdued and lovely in these floral abstractions, especially ones like Space Between the Trees which layers flat, flesh-colored light on top of tropical blues and greens. Where Millei’s paintings use a variety of visual devices at the service of fairly direct and aggressive compositions, Davis is more ruminative about the burden of expertise, and the possibility of reclaiming a beginner’s naiveté.

Spring means open studios in the bay, and the chance to rub elbows (and shoulders, since these things get crowded) with 1000-plus artists in their workspaces. The season kicked off with Art Explosion Open Studios last weekend in the Mission, and continues over the next several weeks throughout the area. If you’re looking to support local artists, or just check in on what ideas are being thrown around by area creatives, there’s no better way. Here’s a rundown of upcoming open studios events.

Mission Artists United
April 20-21, noon-6pm
Approximately 130 artists at two dozen venues peppering the Mission; largest is 1890 Bryant, which houses 38 participating artists. According to the website, you’ll be able to spot open studios by looking for red dots on the sidewalks outside each, including several near the 16th St BART stop. Check the site for a map and guide. www.missionartistsunited.org

Hunters Point Open Studios
May 4-5, 11am-6pm
More than 130 artists work at this Bayview facility. You’ll need a car or the 19 bus to get there, but along the route stop at the separate Islais Creek facility to see the Hunters Point sculpture studios. www.shipyardartists.com

American Steel Studios
May 11, noon-11pm; May 12, noon-5pm
More than 40 participating artists and organizations are in this former West Oakland steel plant. An indoor-outdoor exhibition accompanies the event, which also will include guided studio tours, demonstrations, artist talks, and performances. Oh, and fire: Fire Arts Collective will perform, plus there’ll be fire sculpture and fire-breathing art cars. Check the website for updated schedule. www.americansteelstudios.com

Pro Arts Open Studios
June 1-2 and 8-9, 11am-6pm
More than 400 artists throughout the East Bay make this one of the largest open studios events of the year. Pick up a free Pro Arts guide with map and artist descriptions; you’ll need it to cover the sizable ground. www.proartsgallery.org/ebos