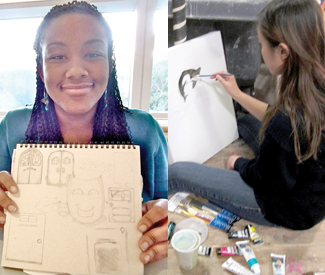 VISUAL ART What if every artistic high schooler were taken aside and taught how to write a grant proposal? At the risk of sounding hyperbolic, the world would be a different place if every young person with a spark had the tools and know-how to fund their work. Or if nothing else, the gallery scene would be a hell of a lot more interesting.

I’d certainly be down to see a show comprised of the work of the three young women who were sharing space with me in a back room of the Yerba Buena Center for the Arts. Hoi Leung, Annie Yu (17 and 16 years old, both from Lowell High School), and Ronniesha Ford Spears (18 years old, Hercules High School) are among the 25 high schoolers participating in YBCA’s Young Artists At Work residency program, a year-long arc during which they spend every Tuesday and Thursday at the downtown art center.

They’re kind of freaking me out about how smart they are.

“What is a professional artist?” Leung, the tech expert with a budding Tumblr full of avant-garde knit masks (stuff-by-hoi.tumblr.com) asks me to qualify when I ask the three if they want to turn this into a career. “That’s a vague term. But yes, this program does give you some kind of perspective on that kind of work.”

The YAAWs, as they are affectionately dubbed by Laurel Butler, YBCA’s youth arts manager, audition to become a part of the group. They attend performances, are taught by visiting artists in master classes geared specially towards them. They take seminars on the practicalities behind making art — promotion, the aforementioned grant writing. Each YAAW uses the new skills towards producing a piece that they show at YBCA at each year’s end. About half return the next year to do it all over again.

Butler — with the aid of a well-timed grant — was adamant that the program this year be tailor made to each young artist to counteract the normative high school experience. “To presume that any one curriculum could represent the needs of the 25 YAAWs — that’s not the model that we want to replicate,” she tells me.

So this year the YAAWs have project advisors (usually YBCA staff) who help them tackle a project addressing pressing social issues. Each one also partners with a community group to inform their piece.

Respectively, Leung, Yu, and Spears are making: a creepy-cool process piece built around Internet privacy rights sponsored by the Electronic Frontier Foundation; remixed movie posters that raise awareness about the Great Pacific Garbage Patch with the help of the Aquarium of the Bay; and an accessible theater program for kids with chronic illness for which CoachArt, a nonprofit is advising.

The work involved in each seemed vast. But with less than three weeks ’til showtime at YBCA’s Teen Night Fri/26 (all 25 projects will be featured, with teen DJs providing the soundtrack for the YAAWs opening night), the three young women are ahead of the game, and willing to humor me about my inquiries about what it was like to spend your day in high school classrooms, and then head downtown to mingle with pro artists, create year-long projects.

Before the four of us splintered off, I got to watch the 25 YAAWs talk about how each had been promoting Teen Night. Flyering lockers, tapping their school’s radio show, tweeting, recruiting art teachers to spread the word — next time I plan an event, I vowed to ping them on Facebook.

“People here, they care about stuff,” Leung told me. “At school, people hide behind their desks.” Most importantly, they said, the program is an opportunity for young people to use their voice. “I learned how to speak my mind a lot more here,” says Yu, who has been known to make watercolor-like digital renderings of Pikachu costume-wearing men (applesoy.deviant.com) when she’s not protecting the environment.

“I learned the meaning of the word limitless,” Spears chimes in. She calls herself “addicted” to the stage, to being seen and heard.

The YAAWs I spoke with affirmed that the hours that they spent at YBCA, though, weren’t necessarily geared towards turning the performance or gallery scenes on their heads. They go deep. “When you get into art, you learn a new dimension of yourself,” says Yu. “And the program’s great after a bad day at school,” Spears says, to the murmured agreements of her fellow YAAWs.