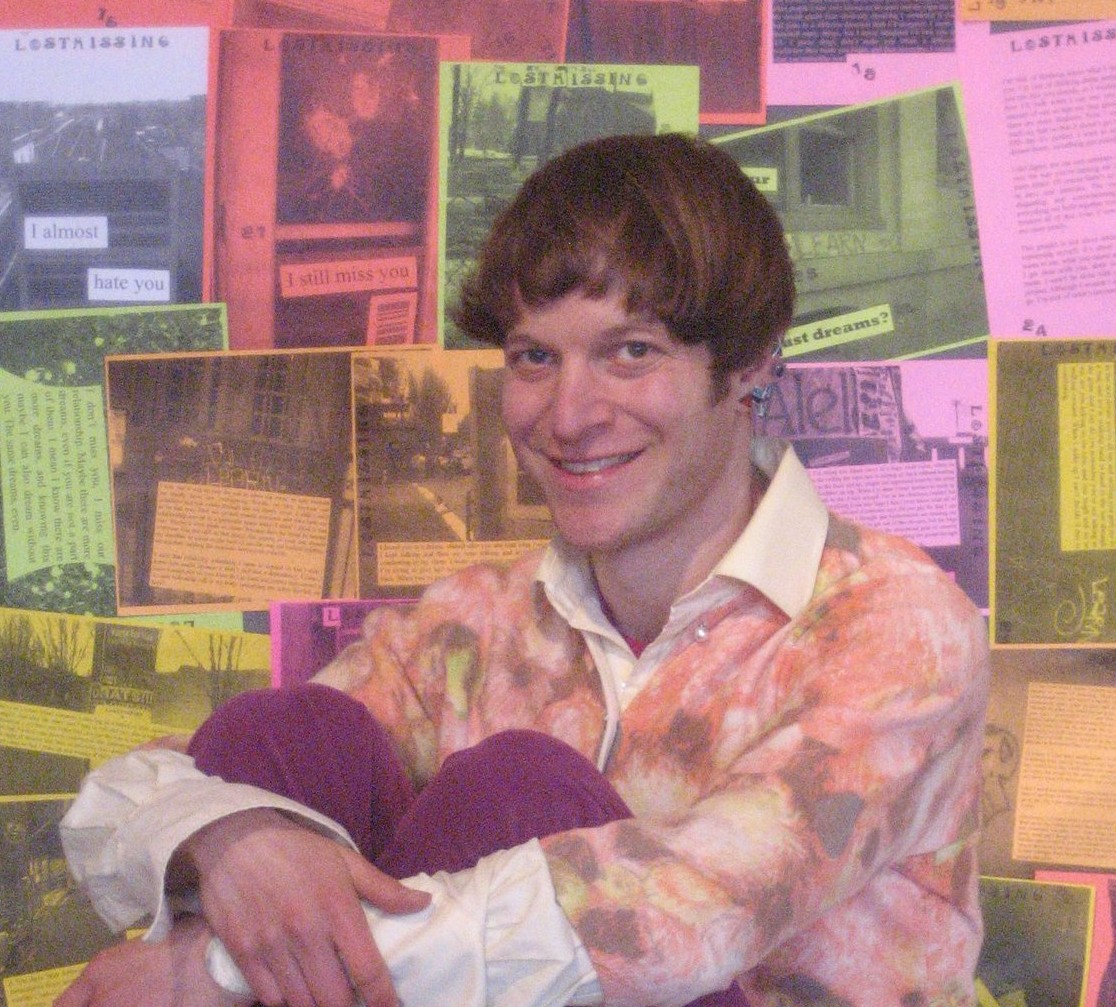 A picture of Brian Goggin’s iconic site-specific sculpture “Defenestration” (that 16-year-old “furniture leaping out of an abandoned building” piece in SoMa that may be demolished soon) is pictured on the cover of Mattilda Bernstein Sycamore’s latest book, The End of San Francisco — which I reviewed in this week’s Guardian.

It’s an almost too-perfect image to represent the book’s contents — “Defenestration” cheekily channeled the out-the-window frustration of the dawning of the first Internet boom, with its hordes of tech gold-rushers pushing out old San Francisco culture. (And now, in the middle of another tech boom, the artwork itself will be pushed aside to make way for affordable housing — the term for anything under $2500 per month rent pretty much at this point.) The End of San Francisco takes us on an atmospheric, highly personal through the turbulent period of the ’90s and early 2000s, while asking some hard questions about the queer activism, participatory gentrification, and “alternative culture” of the period. Along the way, Mattilda intimately delves into issues like her recovered memories of sexual abuse as a child at the hands of her father; the rampant drug use, mental illness, and hostile attitudes of Mission queer culture; the gynophobia and transphobia of many “underground” scenes, and much, much more.

I asked Mattilda a few questions over email in advance of her appearances here at City Lights (April 30) and the GLBT Historical Society (May 9) to help set her book in the context of what was happening then, and what’s still happening now. As always, she pulled no punches.

SFBG What was the impetus for writing such a wide-ranging memoir? You cover almost your entire life, from some of your earliest memories to when you officially moved away from San Francisco. Was there a specific purpose when you sat down to write it?

MATTILDA BERNSTEIN SYCAMORE With my anthologies, I always have a specific purpose in mind, a political intervention, but for this kind of personal writing – I write to stay alive. So it’s a different kind of intervention. I started with 1200 pages of material, and then separated different sections into themes. So, for example, the chapter called “The Texture of the Air,” originally that was something like 200 pages of writing about cruising and its limitations, about trying to regain a sense of hope in my own sexuality. Now it’s 15 pages. At some point I realized that the book centered around the myths and realities of San Francisco as a refuge for radical queer visions in community building. I first moved to San Francisco in 1992, when I was 19, and it’s where I figured out how to challenge the violence of the world around me, how to embrace outsider visions of queer splendor, how to create love and lust and intimacy and accountability on my own terms. I left San Francisco in 2010, and in some ways this book is an attempt to figure out why or how this city has such a hold on me, in spite of the failure of so many of my dreams, over and over and over again.

SFBG I think the most fascinating parts of the End of San Francisco are your spot-on description of life here in the 1990s, and your detailing of the excruciating decline of that era in the dot-com boom. Now
that we’re undergoing another dot-com boom, what are some of your thoughts as to how that’s once again affecting “alternative culture.” Is there any such thing as “alternative culture” anymore?

MBS Oh, it’s so sad! The way gentrification has progressed over these last 20 years. The displacement, the homogenization, the transformation of cultures of resistance into commodities. The way all of this limits people’s imaginations. At the same time, I don’t want to romanticize the past. In the early-‘90s, it felt like everywhere people were dying of AIDS and drug addiction and suicide; it was a desperate time, even if in some ways there were more possibilities for choosing a life outside status quo normalcy. But, no matter when we are living in this country so responsible for genocide, endless war, the destruction of the environment, we are living in a desperate time and we still need to come up with radical alternatives to giving up.

MBS I offered the manuscript ahead of time to everyone in the book who plays a major role. A few people didn’t respond. Some offered detailed feedback. And some, of course, are featured in conversations about the book, in the book – while The End of San Francisco is about my memories, of course these memories exist in the context of the relationships I’m describing. I want to challenge the notion of one true story, while at the same time I obsess about figuring out all these formative moments for me – politically, socially, sexually, ethically, emotionally. One of the funniest responses was from the first person who I trusted, we moved to San Francisco together in 1992. She wanted me to take out the parts where we do drugs, so she could show her kids!

SFBG Another fascinating part is your account of the rise and peter-out of Gay Shame [the guerilla anti-assimilationist co-founded by Mattilda]. You’ve talked about this before in previous books, like the anthology That’s Revolting — how did you approach writing about it within the context of this memoir?

MBS This writing is more self-critical. It’s more about the relationships I formed through activism, the gaps between our rhetoric of inclusiveness and the more complicated realities. Ultimately I’m looking at this activist group that meant so much to me, that challenged and inspired me in so many ways, but ultimately failed me. I’m not saying that it failed, but it did fail me and I’m trying to figure out why.

SFBG Do you think there’s any space now, in SF or anywhere else, for a true queer resistance movement?

MBS There never is space. We have to create it. There is so much self-congratulatory rhetoric in San Francisco, especially in radical-identified queer spaces, and we’re never going to get to something beyond a cooler marketing niche unless we can examine the ways that so often in radical queer spaces people treat one another just as horribly as in dominant straight culture or mainstream gay culture, and it hurts so much more when this kind of viciousness comes from people you actually believe in.

SFBG I loved your take on the Eagle even while I disagreed with some of it. Have you been following the whole return of the Eagle thing, spearheaded by probably our loudest current voice in queer anti-assimilationism, Glendon Anna Conda Hyde?

MBS In the book, mostly I’m talking about how the Eagle, a bar entrenched in mainstream gay norms of mandatory masculinity, objectification without appreciation, racial exclusion, and fear of all things feminine without beards, became a hipster hotspot without changing its core values. I can’t comment specifically on Glendon Anna Conda Hyde, but I will say that it depresses me when people embrace tragic gay institutions as “community,” as if they have ever offered us anything meaningful beyond a place to get smashed with people we’ll hate in the morning. Yes, it’s also depressing that public sex cultures that used to exist South of Market have basically disappeared, but I think we need to envision new possibilities instead of fetishizing the past.

SFBG You write so boldly and candidly about sexual abuse, drug will addiction, illness, relationships, politics … were there any memoir models you worked off of, and were there any rituals you went through to be able to open up so much?

MBS I think most memoirs take the most fascinating, multifaceted, complicated lives and turn them into Choose Your Own Adventure books without the choice. I wanted to create something more layered and honest — I was drawn to exploring the places where my analysis stops, to using those gaps as openings into something more spontaneous and incisive. As a teenager I needed to create a facade of invulnerability in order to survive, in order to find other kids like myself, in order to go on living. But now that façade leaves me feeling shut off rather than connected. Now I’m drawn towards expressing vulnerability, I think that’s what will save me.

SFBG I felt like you left us with a cliffhanger in terms of your father reconciling with you over memories of your childhood sexual abuse. Was there ever any resolution?

MBS I love that it felt like a cliffhanger for you even though the part about visiting my father before he died was right at the beginning. That was an incredibly intense moment for me, to visit him on his deathbed, to go to the house where I grew up with all that violence and still be able to express everything, to sob and tell him that I loved him, something I would never have imagined I would even want to say, but it’s what I felt in the moment and so I figured why not, he’ll be dead soon and I don’t want to hold anything in. For me that felt really powerful: it meant that all this work I’d done to become someone other than the person my parents wanted me to be, it really had worked. That was a certain kind of closure, that openness. But no, he refused to acknowledge anything. He wouldn’t even tell me that he loved me.

SFBG In terms of queer relationships and friendships, The End of San Francisco speaks insightfully about pain, desire, co-dependence, processing, betrayal, apathy, need, and abuse. Was there ever any love? Could there be?

MBS Yes, there was so much love – I hope that comes through in the book! And nothing has let me down more than love.