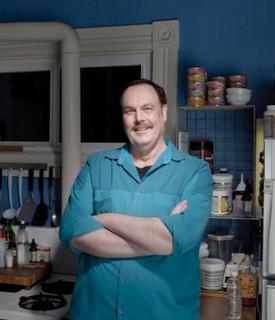 A small but enthusiastic crowd marched through the Castro April 20 to bring some attention to the rash of Ellis Act evictions that are forcing seniors and disabled people out of the city. The activists stopped at the home of Jeremy Mykaels, whose plight is symbolic of the state of housing in San Francisco today. Mykaels insists he’s not a public speaker, but his remarks were poignant; we’ve excerpted them here:

I have AIDS and I am being evicted through the use of the Ellis Act. I want to welcome you to my home for the past 18 years, and to my Castro neighborhood where I’ve spent the last four decades, or two-thirds of my life.

I was there at some of the earliest Gay Pride Parades and Castro Street Fairs, listening to speakers like Harvey Milk and seeing entertainers like Sylvester with Two Tons ‘O Fun and Patrick Cowley. I proudly voted for Harvey to become the city’s first openly gay supervisor. I participated in the fight against the Briggs amendment, which would have outlawed gay teachers in California schools. I walked in the candlelight march honoring the lives of Harvey Milk and Mayor Moscone after their assassinations by Supervisor Dan White. And I’ve been here for many other protests and for many other celebrations.

And like most of you, I’ve seen how HIV and AIDS have devastated this community over the years and I have lost most of my closest friends and lovers to this disease. Until 12 years ago I thought I had somehow miraculously escaped it’s clutches, but that was not to be and I have been dealing with that reality as best as I can ever since, with mixed results. And now on top of the great losses this disease has cost our gay community, even more losses are occurring in the form of more and more long-term tenants with HIV/AIDS living in rent-controlled apartments being forced to move out of their homes and/or out of the city after being evicted through the use of the Ellis Act, or who have been scared and bullied by just the threat of an Ellis eviction into accepting low buyout offers to vacate.

I had always thought that I would spend the rest of my life living in this neighborhood and city that I love. Now I know that, like so many others before me who found themselves in similar situations, I will have no choice but to move out.

And here I would like to call out my own personal vultures as a prime example of how uncaring real estate speculators can be. The new owners of this property are Cuong Mai, William H. Young and John H. Du, and their business entity is 460Noe Group LLC, based in Union City. These are truly callous individuals who knew from the very beginning that they had a person with AIDS living in the building, and soon after they bought the place they began threatening me with an Ellis eviction if I didn’t accept their low-ball buyout offer and vacate. On September 10th, 2012 they subsequently Ellised the building and served me with eviction papers which means that I will only have until September 10th of this year to legally occupy my apartment. All these men want is the highest profit they can get after they remodel and re-sell this building. They could care less what happens to me when I am forced to move out of the city and no longer have access to all my HIV specialists who have kept me alive for this long. A prospect I’ll admit that, yes, scares me. But these guys, they won’t lose even a seconds sleep over my fate.

Yes, the Vultures of Greed are soaring high with sharpened talons ready to feed upon our city’s seniors and disabled, and on what’s left of our already decimated San Francisco gay community. But we don’t have to allow it. Together with our growing number of allies, we can change minds and we can eventually reclaim this city from the Vultures of Greed.

BTW, we couldn’t reach Mai, Young, or Du, and their lawyer, Saul Ferster, did not return a call seeking comment.