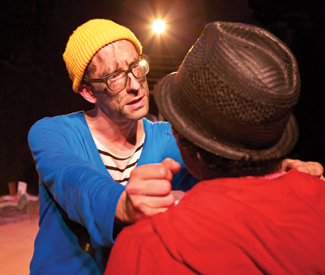 THEATER Many who have followed the remarkable career of Campo Santo, the longtime resident theater company at Intersection for the Arts, will recognize the real-life figure inspiring the character of “Luis Jaguar” in Campo Santo’s new production, The River, penned for the company by Richard Montoya of famed Chicano theater trio Culture Clash. Luis Saguar (who died too young in 2009) was a unique and mighty presence on Bay Area stages for years, not least in the many exceptional productions with the company he helped found (with Margo Hall, Sean San José, and Michael Torres) in 1996.

The River is finally about more than Saguar. Montoya’s play — the first to be produced under the umbrella of a four-play initiative of Intersection for the Arts and California Shakespeare Theatre’s Triangle Lab called Califas, exploring California stories — embraces the nameless, heterogeneous, polyglot lives that make up this roiling culture. (Next up in the Califas series, incidentally, is another Montoya play, the local premiere in late May of American Night: The Ballad of Juan José, out at Cal Shakes’ Orinda amphitheater.)

Nevertheless, Saguar is the spirit, “the heart,” animating The River‘s central story of memory and the concessions exacted on life’s course. It’s the tale of a Mexican laborer named Luis (a warm, stoic Brian Rivera) who has died on the American side of the desert border, leaving behind his adored wife, Esme (Anna Maria Luera). His burial site, and corpse, affects the lives of two trespassing E-addled Mission District hipsters — the arty, loquacious, and oh-so-arch queer couple of Javier (Lakin Valdez) and Lance (Christopher Ward White) — like an act of possession, causing them to question many things about themselves and their worldview. Meanwhile, a circle of disparate characters gradually gathers around the couple, further blurring lines of identity: a self-consciously ineffectual Indian named Crow (Michael Torres), a fastidious and grudgingly sympathetic park ranger (an amusingly nerdy Nora el Samahy), and two life-scarred bar flies at a nearby tavern (Donald E. Lacy Jr. and Randall Nakano).

Between them all, a cacophonous bout of patter, argot, revelry, ethnocentric posturing, and micro-political mapping ensues, interrupted by gently romantic, wistful moments between Luis and Esme — who meet on an epistolary and imaginary common ground that describes a river that is part metaphor, part myth, and part real-world physical divide.

Tanya Orellana’s appealing scenic design, with its alluvial pattern-work on the floor and vertical cascade of shale steps, adds a choice set of elements to the intimate performance space at the A.C.T. Costume Shop. Live accompaniment by guitarist Steve Boss (channeling Charlie Gurke’s score in Day of the Dead face paint) and subtle video projections by Joan Osato (cast on the floor and depicting running buffalo and other scenes) add further moody, ghostly dimension to the room.

Montoya’s rapid-fire cultural dog-pile has a flow of its own that, while erratic, contains some wonderful rapids and poignant coves. Still, the story’s mystery never quite manifests the wonder or suspense it should, and the tensions present in the text are imperfectly realized across uneven performances in the production directed by Campo Santo’s Sean San José. As fans of Culture Clash might expect, the play’s often-barbed humor comes well grounded in local culture, including its array of niche and broad stereotypes, and these provide much of the fuel for the show’s limited fire.

There’s a tendency to take the loopy humor in the play’s looping narrative a little too broadly at times, but there’s both laughs and a kind of half-bitter, half-defiant recognition in the satirical zigzags, as when Lance (played with spoiled but knowing charm by White) announces his desire to have a baby “and prenatal Bikram yoga classes,” — much to the horror of his partner, unemployed Salvadoran Cal Arts grad Javier (played with a cutting, randy intensity by Valdez) — only to be gripped a moment later by a bad trip that throws all his assumptions into turmoil: “Everything I learned is wrong!” he freaks incredulously. “I got my PhD in hip-hop culture?”

If the production proves inconsistent in its navigation of The River’s demanding dialogue and snaking emotional shifts, however, the top of the second act briefly turns it all around with the introduction of Donald Lacy’s character, Brother Ballard. Lacy, a veteran of some leading Campo Santo’s productions, beautifully delivers a monologue of days-gone-by with an inspired precision and verve that recall precisely the muscular theatrical vitality, the street-wise insouciant wit and effortless cool of so many Campo Santo shows past. The confluence of present and past are never more acutely felt, and the impact is bracing.