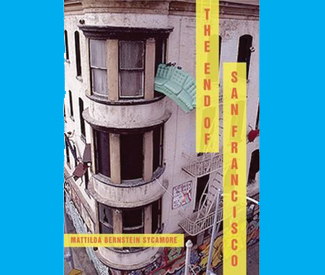 LIT “I met Johanna at a party in New York in 1998 — actually I was talking to her boyfriend first, barrettes in his dyed black hair and painted nails, I was trying to figure out if he was a fag or from Olympia.”

If you were “alternative” in the ’90s, that priceless sentence should ring strikingly true, as will this one: “Obviously we believed in attitude: if someone said something about not wanting to judge people, that was New Age garbage. New Age garbage was almost as bad as a trust fund, it was the same thing as stealing from your friends because you were stealing their rage.”

Mattilda Bernstein Sycamore — outspoken queer anti-assimilation activist, genderblending thriftstore style icon, archetypal Mission District character, huge-hearted den mother, insufferable gadfly — is the posterchild for all that was culturally alternative in San Francisco in that pierced-lip poser decade, while at the same time possessing one of the loudest voices cutting through the bullshit clamor back then and questioning it all.

She’s also a brilliant writer, with two novels and several anti-assimilationist essay anthologies, including last year’s Why Are Faggots So Afraid of Faggots?, under her sparkly little purple belt. Her new memoir The End of San Francisco from City Lights Books is written in such a hypnotically elliptical style (summoning City Lights’ Beat poet legacy) and contains so many spot-on observations and era-damning epigrams that anyone who lived through the period described will cling to its pages while wishing to hurl the book at a wall in embarrassed self-recognition.

Searing, funny, maudlin, elegiac, infuriating, and confessional, The End of San Francisco is a deliberately disordered collection of vignettes dealing mostly with Sycamore’s span living in the city and launching the highly influential Queeruption, Fed Up Queers, and Gay Shame activist movements.

“At some point I realized that the book centered around the myths and realities of San Francisco as a refuge for radical queer visions in community building,” Sycamore told me via email.

“I first moved to San Francisco in 1992, when I was 19, and it’s where I figured out how to challenge the violence of the world around me, how to embrace outsider visions of queer splendor, how to create love and lust and intimacy and accountability on my own terms. I left San Francisco in 2010, and in some ways this book is an attempt to figure out why or how this city has such a hold on me, in spite of the failure of so many of my dreams, over and over and over again.”

It’s definitely not a nostalgia-fest: Juicy passages about SF club history, ’90s queer life in the Mission, and Gay Shame’s internal dynamics and gloriously kooky pranks (guerrilla Gay Shame Awards ceremonies blocking Castro traffic; a Pride adjacent, corporate-sponsor-tweaking “Budweiser Vomitorium” where you could “barf up your pride”) are accompanied by an Oprah-load of issues including chronic pain, incest, personal betrayals, anorexia, depression. The moving opening chapter describes Sycamore confronting her father in the upscale Washington, DC home she grew up in about her recovered memories of his sexual abuse, as he lay dying.

And Sycamore has surprising words for those who think queer punk, riot grrrl, the bathhouse disco and clone-look revival, or the scene at the SF Eagle were essential to the queer activist movement (Kathleen Hanna of Bikini Kill makes a memorable appearance — Sycamore befriended her without knowing who she was, and later attended the first Le Tigre show.) Her habit of questioning everything can often paint her into corners of abrasive self-absorption, but she continues to raise interesting points about the fetishization of machismo in the FTM, leather, and punk communities, the emptiness of hipster activism, and the capitalist-colluding hypocrisy of “alternative culture.”

As usual though, she saves her heaviest judgments for the mainstream gay morass, its Borg-like drive toward cultural hegemony via marriage, military, and consumerism — even as she acknowledges the necessary symbiosis that binds queer outcasts together. At 1993’s March on Washington, “where suddenly there were a million white gay people in white t-shirts applying for Community Spirit cards”: “Gays in the military was the big issue and what could be more horrifying but here’s the thing: freaks actually found one another — we were so alienated that we went right up and said hi, I like your hair…”

This, then, is the tenderness that drives Bernstein to keep speaking out, despite the personal costs. As we weather another dot-com boom of homogenizing gentrification, The End of San Francisco is a timely reminder of the community that can spring from resistance.