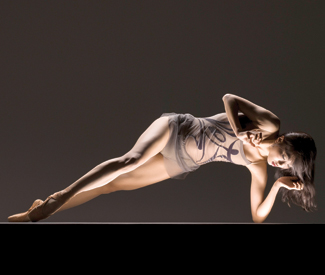 DANCE Watching premieres by artists with track records is almost as satisfying as encountering pieces by those unknown to you. With the first, you wonder what else they have come with; with the second, you look for a voice that might grow to find even greater resonance.

Alonzo King, whose LINES Ballet celebrates its 30th anniversary this year, is clearly in that veteran group. We know his approach to dance; by now we even have a sense about the conceptual streams that feed his choreography. We recognize his predilections for small units within a larger context. We know his preferences for a certain type of spatial and temporal fluidity. Yet he still manages us to surprise and excite us.

King’s collaboration with composer-bass virtuoso Edgar Meyer, simply called Meyer, was full of unexpected physical turns and touches of narrative that rarely manage to insinuate themselves into King’s other choreography. Most gratifying were splotches of a light spirit, and a playful sense of presence. Not that there weren’t dark moments, but Meyer‘s sense of the complexities of human behavior floated much more to the surface than in many of King’s other works. Meyer is a friendly, welcoming piece that doesn’t play down to the audience. If that is a trend, let’s have more of it.

To see Michael Montgomery again and again tear up the space with such abandon was exhilarating. In the quartet, two couples actually competed with each other; they ended the stalemate by switching partners. In Meyer‘s somewhat enigmatic “Cards” segment, David Harvey — wonderful in a long off-balance moment — shuffled what I thought were letters, throwing them at an initially unperturbed but increasingly agitated Kara Wilkes, and spreading them around the stage to other dancers. I couldn’t help thinking about the damage that the indiscriminate dissemination of information can to do people. Harvey, somewhat obviously, then tried to eat the pieces of paper. Wilkes, who joined the company in 2011, did a star turn in this performance, turning herself inside out and upside down, ending crumpled.

For the pas de deux, Meyer went into the pit to play the piano. It was so refreshing after all those string sounds (Gabriel Cabezas on cello, Robert Moose on violin). Meredith Webster and Harvey, holding hands to support each other and keep the partner away, were wonderfully contentious and complementary. They deserved their ovation.

I believe that Meyer’s score — both new and assembled — and the musicians’ sensitive presence on stage are what made Meyer such a delightful experience. The dancers and the musicians worked with such ease that some of it looked as if had come about on the spur of the moment. Perhaps King decided to step out of the way and offer the performers a jazzy sense of freedom. Refreshingly, sometimes the dancers set a section going, and the musicians stepped into the picture. The large-scale finale, however, dragged on through several line dance formations. They were probably fun to do.

King choreographed the highly dramatic Writing Ground in 2010 for the Ballet de Monte Carlo. It’s a quintet for Webster and four men who manipulated her into becoming a tool that, at times, she acquiesced to but also desperately tried to escape from. At one point, she broke into a silent scream. The consistency with which her body was literally manhandled when it refused to cooperate was disturbing.

The program opened with two even older pieces. The six selections from the 2005 Handel, set to excerpts from the composer’s Concerto Grossi, did not make a satisfying new whole. They looked as if they had been slapped together. However, individually, they offered performance spotlights for dancers in a company that treasures and encourages independent thought.

In his solo, Paul Knoblauch, who joined LINES in 2012, proved himself as a technically assured perfumer with a wide reach and secure sense of space. Courtney Henry led the finale with a whippet’s speed and an almost desperate sense of volume. And all I could think of during the second reprise, the finale from the 1994 Ocean, was how fabulous that work looked with Pharoah Sanders and his extraordinary players in the pit. Couldn’t we please get all of Ocean back — including the musicians? *

Yerba Buena Center for the Arts,